“Kids want to rock,” Wiser said. “And they’re not afraid to rock. There’s no inhibitions.”

Contrary to popular belief, Chris Wiser is not always wearing a bow tie. But he doesn’t go far without one, either.

On the day of Sugar Free Allstars’ recent Oklahoma Gazette cover shoot in Norman, Wiser, keyboardist and vocalist for the only “family funk super duo” in Oklahoma City — and maybe the world — removed one of his trademark bow ties from the console of his truck and hustled back into Bell Labs Recording Studio.

Inside, he squeezed in next to drummer Rob Martin, better known as Dr. Rock. They were crowded by gear branded with the band’s new logo, yet to be seen in public. The pair was so close they could elbow each other. An oversized bag filled with plastic red and blue balls was dumped into the space for good measure.

The Grammy winners were in the mixing stage of making their self-titled fourth family-friendly album, due out April 4. Still, Wiser had some hopes the shoot could maintain the illusion of a band in mid-jam.

“This is exactly how we track an album,” Wiser joked while Martin sat with his leg propped against the bass drum.

Maybe it isn’t “exactly” how the band tracks an album, but the personas Wiser and Martin adopt in the spotlight are not too far removed from how they behave in real life. Family music’s Penn & Teller were born to be rock stars, even if it didn’t always feel like it.

Martin and Wiser’s new album is their first new project in three years. Wiser also believes it is their most ambitious effort to date.

Yes, he said ambitious. The band with a catalogue that includes hits like “Cars and Trucks” and “Rock Awesome” might work with childlike themes, but their instrumentation and vision is palatable — and enjoyed — by adults, too.

“We don’t really write kid songs, per se; we just write songs,” Wiser said. “We just make sure that they’re appropriate for everybody to listen to.”

Some parents secretly loathe the rudimentary sounds they hear from candy-coated kid bands on TV, but there’s nothing dumbed-down about Sugar Free Allstars, a project that offers nods to the funk of music acts such as Deep Purple, Parliament, Dr. Teeth and The Electric Mayhem, New Orleans Dixieland and Second Line.

Trent Bell, Sugar Free Allstars producer and former Chainsaw Kittens guitarist, previewed some of the band’s new tunes while Wiser and Martin listened on a couch against the wall.

The first song Bell played, “Mr. DJ,” was inspired by early-’80s Prince but has lyrics about not wanting to go to bed instead of getting freaky in one.

The song faded to a close. Wiser perked up as he listened to the opening drums of the following track.

“This is the hit,” he said. “This is the song people have been waiting for. Kids are dying to get hold of this song.”

Then came the opening lyrics.

The heavy electric track is their homage to Deep Purple, Martin said. But what makes it truly great is that it’s more than a simple smash fest with a looped riff. The song has musical stages and layers with the type of progression you don’t hear on Nick Jr.

Without the words, you would not guess “Monster Truck” is a song made with children in mind.

“We’re not breaking new musical ground, but I feel like, in some way, in the family music genre, we’re pushing the envelope,” Wiser said. 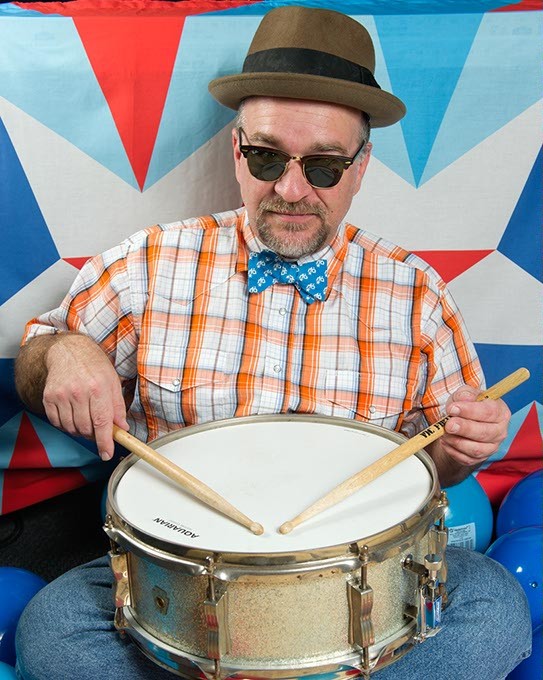 In the industry, some music is made exclusively to entertain children. This is not the aim shared by Sugar Free Allstars, a band originally founded as an adult-oriented, club-playing three-piece.

“A lot of these groups that are more children’s music … a lot of those musicians might not have ever experienced that part of it — trying to entertain adults,” Wiser said. “[However,] I think a large percentage of the people we personally know in the kindie rock world have.”

Kindie rock, a term coined in the last decade or so, is a style that packages age-appropriate musical themes within indie music that is palatable for an entire family.

After the duo finishes live sets, parents often approach them in disbelief, saying they were not expecting to enjoy the show.

“Parents will tell us that they listen to the albums when their kids get out of the van,” Martin said. “They still keep listening.”

In his experience, Wiser said most kindie rock bands are similar to his own in that they come from conventional, adult backgrounds.

“It’s a pretty small scene of people who have done some pretty cool things,” he said.

Sugar Free Allstars, which was the band’s name even before entering the kindie rock world, released its first family album in 2007 with the intention of it being a one-off, novelty project. At the time, parents were already telling them their children enjoyed the group’s music, so why not?

Even in the burgeoning genre, Sugar Free Allstars’ funky sound quickly stood out. The duo began making connections in family music circles across the nation before it built a local brand.

“It was literally like somebody was like, ‘This is the way you’re going to end up. You don’t realize why you’re making these decisions now, but you’ll see why; just stick with me,’” Wiser said. 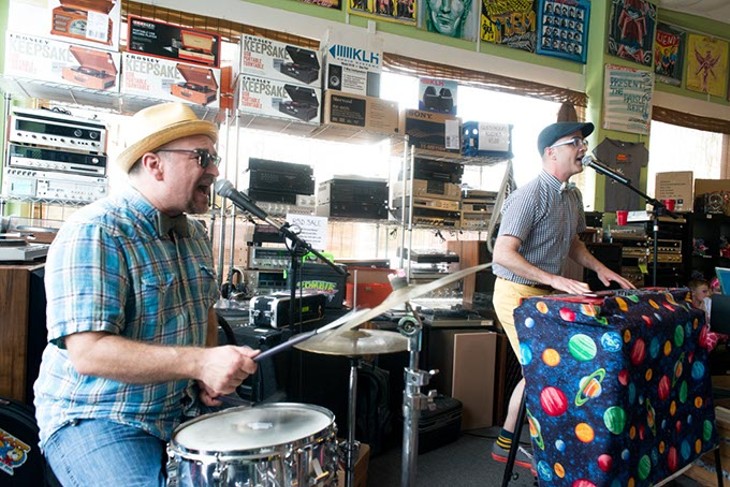 There are no real rules to writing kindie rock, Wiser said, but he doesn’t write about drinking alcohol, staying out late or getting cheated.

“We might write about women, but it’ll be Mom,” Martin added.

The duo also must remember to be as apolitical and not offensive as possible. After years of performing in 21-and-up venues, Wiser and Martin also are much more aware of what they say while onstage. A slip-up could ruin them.

Even so, the act does not bind itself strictly to elementary-school themes. On the 2014 single “My Daddy’s Record Collection,” for example, Sugar Free Allstars introduces children to a technology most have never heard of while simultaneously striking a nostalgic chord with parents. Like pop culture references in Pixar movies, Wiser and Martin hide old band references and harmless jokes within their music that often go unnoticed by younger listeners.

Wiser wasn’t married until after Sugar Free Allstars moved to a kindie rock format. He now has two children of his own. Before he became a father, the vocalist said some songs were inspired by things he would see other people’s kids do.

Writing family-conscious lyrics, Wiser said, is not any easier or harder than writing for other genres.

The pair said they still find what they do artistically rewarding. One song that hit the top of the SiriusXM radio kids’ chart, Wiser said, was very much a James Brown-type funk.

The vocalist said he is honored and excited to imagine Sugar Free Allstars might be a child’s first live rock show and the first exposure they have to that kind of sound.

“Not that we’re better than James Brown, but they might not have ever heard James Brown,” he said. “So what if they like this and they seek it out later in life because of what we did?”

Wiser and Martin remember playing at bars in front of maybe 10 people. Their CDs just sat there as people instead spent their money on another round of drinks.

“That’s a big deal in a bar,” Martin said. “People will not buy the album because they need to buy that last shot.”

In a kindie rock format, the band no longer competes for dollars. In fact, because adults enjoy the music, many parents are more comfortable buying their album with the knowledge that it will be played in their car a few hundred times.

In addition to financial benefits, shows are played in the daytime, so Wiser is free to spend evenings with his own kids.

The transition has opened up doors the pair never imagined when playing ahead of last call inside a dark pub.

“We’re both convinced, the way it was going, that the band wouldn’t even exist anymore if it weren’t for this,” Martin said. “We were getting pretty burned out.”

An appearance on a Grammy-winning children’s album or the opportunity to play with the Oklahoma City Philharmonic never occurred to them before, but both have become realities for the duo that said they are unlikely to ever return to music aimed at solely adults.

Sugar Free Allstars has several events planned before the release of its next album, including a March 16 appearance on the South by Southwest Family Meltdown stage in Austin, Texas, and a March 24 event with the Oklahoma City Philharmonic. (Learn more about the Link Up grade-school music program at okcphilharmonic.org/registration.) The band will also be showcasing KindieComm, a national family music conference in Philadelphia, April 2.

No matter where Sugar Free Allstars plays, a crowd of loud and passionate fans is sure to follow.

Adults can get excited for rock shows, but for children, that excitement comes from somewhere more primal. They don’t need time to warm up to the band or liquor to put them at ease.

“You scream at them, ‘Are you ready to rock?!’ and they will scream back as loud as they can,” Wiser said.

The two often have to yell — not just to show stage energy, but to be heard over the deafening crowds that can form at a festival or in a school auditorium.

Two years ago, the duo played the youth stage at Austin City Limits in an outside mall area overlooked by apartments nearby.

The noise level from that performance was so intense, people from the apartments called the police with noise complaints.

“Kids want to rock,” Wiser said. “And they’re not afraid to rock. There’s no inhibitions.”

Sugar Free Allstars’ self-titled album will be available for pre-order on iTunes on Thursday.