Cover Story: The Jones Assembly is a cornerstone for burgeoning Film Row district

Around the turn of the new millennium, two Oklahoma-born friends in their early 20s dropped into Dallas music venues three to four times a week. Over the course of those nights, after listening to various acts and taking in the atmosphere and ambiance, Brian Bogert and Graham Colton would let their minds wander and attention shift to a place of their own.

Those conversations, which usually began with “One day …,” included ideas for a music venue. Since the 20s are prime years for launching careers, Colton went on the road to pursue his passion as a singer-songwriter and Bogert, along with college friend Manny Leclercq, chased their restaurant dreams to the Oklahoma City metro.

Even so, what Bogert and Colton dreamed was not forgotten.

More than a dozen years later — Colton a well-known national recording artist and Bogert a successful restaurateur — both were ready to meld their interests and passions with their experiences.

After touring a boarded-up two-story 1930s warehouse — once part of The Fred Jones Manufacturing Company complex — in OKC’s burgeoning Film Row, the conversation graduated to a business proposal. With help from partners chief Brittany Sanger and brothers Fred and Kirk Hall of Hall Capital, The Jones Assembly was born.

The Jones Assembly, 901 W. Sheridan Ave., is a dining and entertainment destination with refined regional cuisine and handcrafted beverages. On the entertainment side, the 225-seat restaurant transforms into a 1,600-capacity music hall when national acts like Willie Nelson, Cut Copy, JJ Grey & Mofro and Matisyahu perform there later this year. The Jones Assembly is a top-tier attraction, from dining to concerts, creating a one-of-a-kind venue for Oklahoma City and beyond.

“We all pulled different elements of places, restaurants, bars and music venues that we’d seen around this country and international,” Colton told Oklahoma Gazette. “Never was there something with all-in-one. It was a challenge and an opportunity, with a big bet made on Oklahoma City.”

When The Jones Assembly opened July 13, it quickly delivered on its praise-worthy food and spirits, music events calendar and a spectacular view of the west side of downtown OKC. Even before it opened, it already was the city’s hottest destination, between private events honoring Oklahoma-born actor Gary Busey and recently signed Oklahoma City Thunder basketball All-Star Paul George to invitation-only soft openings.

The Jones Assembly’s path to success expands beyond its brick walls. Two blocks east is the Film Exchange District listed on the National Register of Historic Places — one of two surviving film exchange districts in the country. A once-vibrant commercial home to operations for the top studios, the area — after three decades of blight and vagrancy — is now a blossoming arts and innovation district known simply as Film Row.

“You can see it and feel it,” Colton said. “It’s not just the [21c Museum Hotel] and The Jones Assembly. It’s the brewery around the corner. Its Film Row with all the businesses that supported a local street festival that first brought people down here. It’s Okay Yeah Co. and the Plant Shoppe, which is an ambitious and forward-thinking concept. … There are a lot of great, energetic Oklahomans contributing to the energy that we are proud to be a part of.” 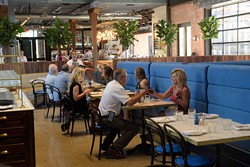 Around the time Bogert and Colton first imagined their music venue, OKC developer Chip Fudge was turning his attention to a long-blighted downtown strip tucked in OKC’s central business district. Gone was the business of film as it had been decades since movie theater owners went in and out of the Art Deco brick buildings to screen and lease films for their theaters. Populated largely by vacant buildings with vagrants sleeping on the doorsteps at night, the area was bleak and had adopted the unofficial moniker skid row.

Fudge, among others involved in the Oklahoma City Film District Task Force, saw a bright future beyond the blight. The strip along W. Sheridan Avenue had historic charm and revival potential.

“It seemed to make sense that if we could buy it, start developing it, even with the homeless and skid row challenges, we might have something,” Fudge said.

In 2006, Fudge did just that when he and his wife bought several historic buildings and made plans for rehabs. As his projects moved forward, so did task force efforts to establish a Film Row business district and bring a city-funded streetscape project to the area.

A decade later, Film Row is home to thriving businesses — from law firms and architecture firms to eateries and fine arts venues — in historic buildings and a walkable commercial corridor along W. Sheridan Avenue, which includes intersection markings reflecting the area’s historic role in the film industry.

“We’ve done a really good job of getting creative commercial,” said Fudge, who relocated his company Claims Management Resources to one of his developed properties, The Hart Building, 726 W. Sheridan Ave., in 2013.

Early on in the development of Film Row, Fudge saw the potential for nightlife and residential offerings.

“With the Jones Assembly, the 21c Museum Hotel and the apartments, there is no question in my mind that it has come,” Fudge said. 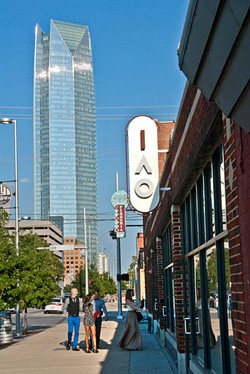 In 2010, timing and appeal led Irena Kendrick Kezic to relocate Joey’s Pizzeria from a small shop near the intersection of N. Classen Avenue and NW 18th Street to the newly rehabbed Sheridan Avenue Film Exchange building.

“It was a risk,” Kendrick Kezic said.

Three years earlier, she began operating what was mostly a pizza delivery business serving surrounding residential neighborhoods. The Film Row property allowed for growth into a full-fledged restaurant in an area poised for revitalization.

“If I can survive buying a business during an economic recession, I will survive this too,” she eventually decided.

As Joey’s Pizzeria began to fill tables, Jenny Mae Harms — a staffer with KOSU, a public radio station operated by Oklahoma State University — garnered an early tour of the former Hart Industrial Supply Company building. As she walked on the dirt floor, she heard about Fudge’s vision for a mixed-use workplace that included a spot for the radio station.

“I remember there being a lot of excitement about what was going to take place,” Harms recalled. “It has been really interesting to watch the journey.”

KOSU began broadcasting from Film Row’s Hart Building in September 2013 but continued to maintain a station from OSU’s Stillwater campus. These days, the public radio station is one of a half-dozen businesses and organizations, including deadCenter Film Festival and Caeli’s Sweets, Eats & Bar, residing in the two-story buildings.

“When you go to the Plaza District, there is a definite vibe that you recognize when you are there,” Harms said. “Same is true of the Paseo Arts District. I feel the Film Row district is still finding itself. It is a collaborative group of professional businesses, performance venues and small local businesses. It is very diverse people who make up this district.”

The district comes with a neighborly vibe, said David Smith, board president of IAO Gallery, one of the first organizations to arrive in Film Row. Part of the appeal was the potential for foot traffic, which has only increased as new businesses and organizations moved in along W. Sheridan Avenue.

“People will stop in at Joey’s or the Plant Shoppe, then they come see us,” Smith said. “There are a lot of people that come in just to say hi because they are in the neighborhood.”

“It was the overlooked, not-quite-shiny penny,” Sorocco explained about his first visit to the property nearly a half-dozen years ago. “The more we looked at it, we looked at the opportunity. When we thought about what might happen in the area, we couldn’t turn it down.”

After an extensive transformation from a warehouse to a law office, Dunlap Codding joined Film Row in February 2013. Within a few months, lawyers and legal staff were meeting closely with other Film Row tenants to plan monthly art walks and events for the district. With the law firm’s event space, which includes a kitchen and outdoor courtyard and known as DC on Film Row, district-sponsored events have included entertainment or activities in the law firm’s office.

Over the past four years, Sorocco has come to see the area as a blank canvas, offering anyone the chance to come be part of molding the district into its own unique urban district.

“People can come and create something new that they might not be able to in a more established district with a distinct identity,” he said.

“It was a new concept for the city, and it perfectly paired with this up-and-coming district,” Rodriguez of FlashBack RetroPub, 814 W. Sheridan Ave., explained. “Film Row already had an established daytime crowd. Being the first bar, we helped pave the way for what else could come in the district.” 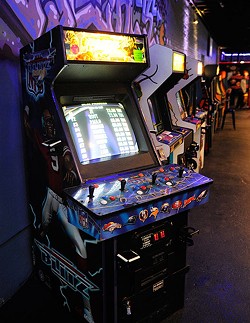 Revitalization efforts in Film Row picked up following the announcement of a 21c Museum Hotel to operate from the former Fred Jones factory. Last summer, the 135-room, full-service hotel with an upscale restaurant and contemporary art exhibit space opened its doors along Main Street.

Fred and Kirk Hall’s Hall Capital partnered with the Kentucky-based boutique hotel chain to bring its concept to Oklahoma and locate in their legendary grandfather’s assembly plant, which Fred Jones referred to as his “Camelot.”

The 21c Museum Hotel was the first of a three-part master plan to revitalize the west side of downtown. The Jones Assembly makes up the second part, followed by the West Village, developed by Mark Beffort, Andy Burnett and Zach Martin in addition to Hall Capitol. The West Village will deliver housing, retail and office in the under-constructed areas east, south and north of 21c.

As The Jones Assembly settles in, it finds good company along W. Sheridan Avenue, where there is a common desire to build a better city and where aspirations, and even daydreams, have been realized again and again.

“Everybody involved in The Jones Assembly, from the partners to our staff, they are all people that love Oklahoma City,” Colton said. “A majority of us had essentially moved away but came back. I think that represents where this city is headed. I hope people can look at this and people with other forward-thinking ideas will do them. Bet on the city. Bet people will come home. Bet people will stay.”'

Print Headline: Tapping success; The Jones Assembly is the next cornerstone for burgeoning Film Row.

Film Row through the years

The birth of the motion picture industry took hold in the early 1900s, and according to the Oklahoma Film Society, the first film exchange business opened in Oklahoma in 1907. Film exchanges served as the starting point for theater owners to rent or trade motion pictures to show in their theaters.

In the early years, Oklahoma City’s film exchanges scattered around the city before consolidating along Grand Avenue, now known as Sheridan Avenue. Given the area’s audience of theater owners, theater supply showrooms and supportive businesses located along the street.

The mostly deserted downtown strip became known as a skid row as vagrants and the homeless congregated in the area not far from local shelters. Film exchanges, boarded up and left to deteriorate, were eyesores to city and community leaders; however, development efforts were mostly reserved for the suburbs, leaving little done in the inner city.

Property owners, preservationists, community members and government leaders came together in the Oklahoma City Film District Task Force, laying out the vision for a Film Row business district that would revitalize the derelict area.

In 2007, the Film Exchange District was added to the National Register of Historic Places. New businesses and organizations began to move into newly rehabbed buildings. The addition of 21c Museum Hotel, followed by The Jones Assembly, ushered in the next wave of revitalization.