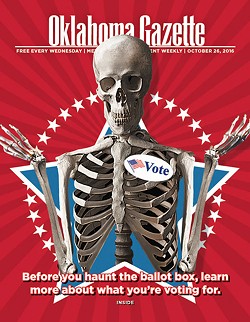 A message from Oklahoma Voter Guide contributors: Oklahoma Voter Guide is a nonpartisan effort by a coalition of Oklahoma entities from both the nonprofit and for-profit sectors. After many months of planning, we are proud to offer readers a high-quality resource with analysis and education for the 2016 general election. This voter guide does not endorse or oppose any candidates for state or federal office, nor does it take any position on the state questions. We welcome your feedback and encourage you to share this guide, which is available for download on all partner websites [partners listed below] and at okvoterguide.com.

A message from Oklahoma Gazette editor-in-chief Jennifer Chancellor: Oklahoma Gazette’s excerpts of the 2016 Oklahoma Voter Guide were made possible by a partnership between League of Women Voters’ of Oklahoma, KOSU, OETA, Tyler Media, KGOU, Oklahoma Watch, The Oklahoman Media Company and Kirkpatrick Foundation. The Gazette humbly thanks all involved with the project for encouraging our news publication to share this important information with the community. It’s everyone’s democratic and civic duty to vote on Nov. 8, and this year’s ballot is an important one.