“We, as women, are told repeatedly that our experiences aren’t valid, our votes don’t count and we can’t make a difference,” Horn said. 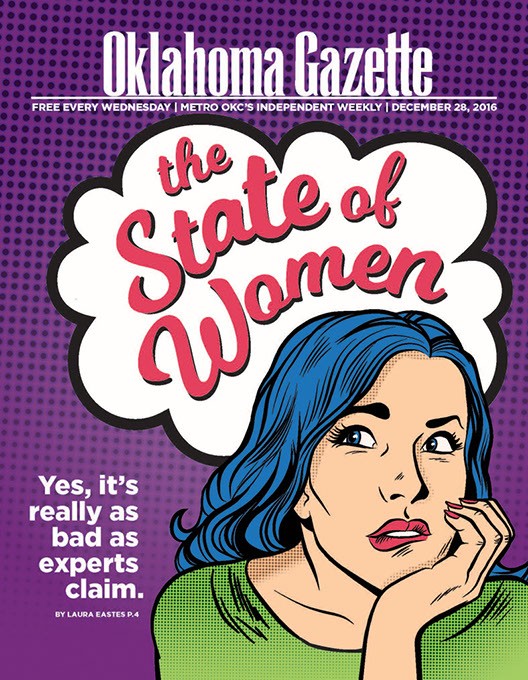 More than half of Oklahomans are women. But in a state that ranks fourth in the nation for women killed by men, where only 12.8 percent of state legislators are female, where women’s health and reproductive rights are perennially assaulted by unconstitutional bills, women can nevertheless feel quite alone here.

While Oklahoma is one of only six states currently run by a female governor, the glass ceiling is far from shattered, as a multitude of sociocultural ills hold the entire state back from achieving egalitarianism.

Culture and social norms determine how women are perceived and how they perceive themselves. In Oklahoma, it’s not uncommon to hear, “Step aside and let the man do it,” and for traditional gender stereotypes to hold almost unquestionable reign, said Kendra Horn, executive director of Women Lead.

Women’s advancements are limited by social programs and policy, restricted human capital and the societal expectation for women to participate in specific industries, such as education, health care and community programs.

“We, as women, are told repeatedly that our experiences aren’t valid, our votes don’t count and we can’t make a difference,” Horn said.

Sometimes these putdowns are explicit; sometimes they’re not, like when a woman is objectified, ogled or cat-called by strangers or how working women feel they have to struggle twice as hard as men to demonstrate they are qualified to speak and contribute.

Founded in 2015, Women Lead works to combat feelings of seclusion and vulnerability by building a “community of dynamic, engaged women leaders across our state.” The organization challenges conventional culture norms and structures that govern civic life and have plagued women and the state for too long. Through lunch meetings and workshops, women become informed, connected, active participants in their lives and communities. Perhaps more importantly, women’s voices can be a tool affecting social change.

“When a person feels their voice matters, they are more likely to use it,” Horn said.

Strengthening women creates a ripple effect that yields multiple benefits, not only for individual women, but also for families, communities and the state. It’s imperative that women stand and acknowledge their own power and for men to support them, Horn said.

“If we want to change anything, women have to start stepping up,” Horn said. “We also need men to understand our challenges. Until all of us take concrete steps and actions to improve the overall lives of women and the experiences of being a woman in Oklahoma, the whole state is held back.”

About 15 years ago, when President George W. Bush announced on television that Elaine Chao, an Asian-American woman, would be U.S. Secretary of Labor, a teenager found reason to hope.

Rep. Cyndi Munson recalled giving her full attention to that news broadcast. She had never seen someone who looked like her in a position of political leadership in the U.S. before. While it didn’t serve as the launching point for Munson’s political career, it was a significant moment that inspired an Asian-American teenager from Lawton to dream big.

“If you can’t see it, you can’t be it,” explained Munson, who became the first Asian-American female to serve in the Oklahoma Legislature in 2015.

In the days and weeks that followed Election Day, Munson uttered a question she has repeatedly asked for years: Where are the women? Oklahoma has traditionally had a dispiriting dearth of women at the Capitol, but the November election depressed the number of women lawmakers from 21 to 19, despite a record number of candidates.

Did gender bias emerge in the voting booth? Munson is not convinced voters are biased against women candidates. Munson heard the comment, “I wouldn’t vote for you because you are a woman,” only once during her campaign.

Instead, she points to fundraising and support. In a state where women have been under-represented in elective office, donors and supporters are more skeptical about women’s electability. Donations, along with campaign volunteers, Munson said, can be harder to come by for women.

“We can’t just talk about women candidates; we’ve got to stand by their side,” said Munson, suggesting women knock on doors, donate money or provide childcare or a meal to help a candidate during the final weeks of an election.

Research supports that elected women make the most effective lawmakers, from their abilities to reach across party lines and form coalitions to successfully ushering bills through the legislative process.

Women lawmakers in Oklahoma have informally worked across party lines on essential societal issues, including violence against women, the foster care system and health. Women bring their voice and experience to the Capitol, explained Munson, legislating change for all people involved, not just other women.

Community demand is imperative to growing the number of women lawmakers. It’s up to women to consider running for office and those around them — both women and men — to encourage and nurture their candidacy.

“In Oklahoma, we have strong women that are working on the sidelines and behind the scenes,” Munson said. “Women have to come to the front.”

At the Oklahoma Commission on the Status of Women, the big, broad goal of improving the status of women gets distilled down to a simple concept: strengthen and empower women.

For more than three decades, the state commission has worked to inform and educate the state’s top elected officials as well as everyday citizens on women’s issues, such as incarceration, obesity and diabetes, human trafficking and domestic violence.

“Oklahoma is a state with so much potential,” said Kitti Asberry, the commission’s executive director. “We tend not to put the effort into making sure women have everything they should have to be successful.”

The commission, which has traditionally been known for recognizing champions of women’s issues and hosting biannual summits, is strengthening its mission by hosting community conversations. Built as an opportunity to educate the public on a host of issues, the goal of the commission is to strengthen community understanding, propose solutions and connect with local lawmakers and officials to bring change.

In 2016, the commission focused on a community conversation about domestic violence, and it is interested in exploring education in 2017. 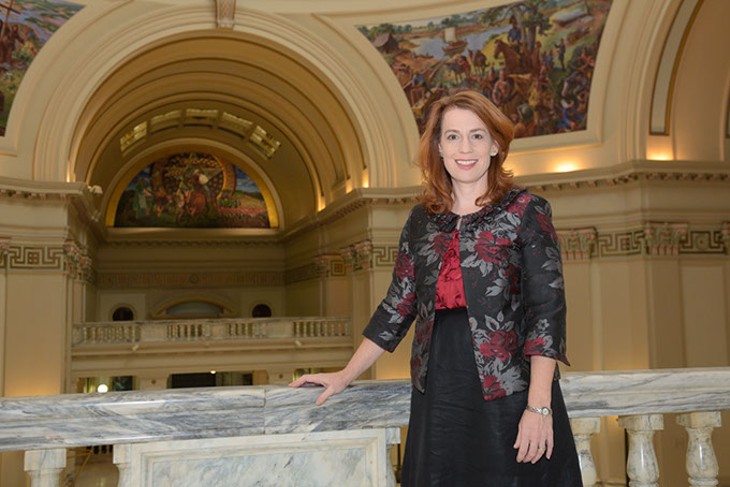 Feelings of anger were ignited when the Oklahoma Senate adjourned early from the 2016 Legislative Session in late May. Despite a dozen bills awaiting final votes and time remaining before the 5 p.m. constitutional deadline, lawmakers walked away from the Senate floor with no plans to return until the following year.

One of the bills killed was House Bill 2929, a bipartisan pay transparency bill intended to make it easier for women to learn how their wages compared to their male co-workers. Backed by Oklahoma Women’s Coalition, the bill was viewed as a small step toward gender pay equality in a state where women are paid 73 cents for every dollar paid to men.

It would’ve taken only a half-hour more to usher in equal pay enforcement, which Danielle Ezell, executive director of Oklahoma Women’s Coalition, and others advocated for throughout the four-month democratic process.

The coalition suffered one of the harshest realities of politics. The bill’s backers hadn’t flooded the Senate gallery or spilled into the rotunda, rallying for the bill’s passage on the final day of session to hold lawmakers accountable.

“What if more people had been there to lend their support that day?” Ezell asked more than six months later. “A vocal group of people, even a small vocal group, can make a huge difference.”

Since 2009, Oklahoma Women’s Coalition has advocated for a variety of initiatives to improve the lives of women and girls. Through a statewide network of individuals and organizations, the nonprofit works in four areas of advocacy and education: economic security, health and wellness, alternatives to incarceration and violence prevention and response.

“We would like Oklahoma to be a place where women and girls can thrive with incredible opportunities,” Ezell said. “Unfortunately, we are at the bottom of nearly any list pertaining to the status of women. … There is a lot of opportunity for improvement. We know when women thrive, everyone thrives.”

When the 2017 legislative session begins, Oklahoma Women’s Coalition will advocate once again for pay transparency as well as paid family leave. In the months leading up to session, the message was met with mixed emotions. One lawmaker has already contended there is no time during this four-month legislative process to work on any other issue besides the budget shortfall and teacher pay. Indeed, gender egalitarianism has long been at the bottom of Oklahoma’s legislative priorities.

“We have been at the bottom of these lists for a long time, even when times were good,” Ezell said. “We cannot sit back and accept the status quo anymore. When does this become unacceptable? At what point is there a tipping?”

After the election of Donald J. Trump, Oklahoma City resident Lindsey Kanaly’s Facebook feed was packed with women registering their anger, disbelief and grief. Those messages continued for days and weeks.

Just when Kanaly had decided to step away from Facebook, she came across a group of women banding together to move forward for progress after a demoralizing and insulting election cycle. One answer was Women’s March on Washington, an opportunity to send a message to the new president.

Not everyone can easily make it to Washington, D.C., for a Jan. 21 event. However, when it was suggested that cities throughout the nation host marches, Kanaly pledged to organize Women’s March on Oklahoma. With an Oklahoma State Capitol march, demonstrators can advocate for changes on a state level.

To her astonishment, Women’s March on Oklahoma, which began as a simple Facebook event, sparked fellow Oklahoma women to ask what they could do to improve the lives of women.

“Our goal is to bring people together, educate them about what is happening in Oklahoma and what needs to change,” Kanaly said. “Our legislators need our support. They can’t do it by themselves. They need to know what is important to us. If we are not vocalizing that, if we are not calling or writing, the legislators will do what they think needs to be done.”

One day following the presidential inauguration and about two weeks before the first day of the Oklahoma Legislative session, women and their allies will march around the Oklahoma State Capitol to unify on issues of health care, economic empowerment and prevention of violence. The march is Jan. 21.

“This is a call for unity,” said Cicely Johnson, who came across the group and reached out to Kanaly to assist in planning.

More than a dozen women are involved in orchestrating the march, which might be the first of its kind in Oklahoma.

“It’s not about race, religion, political affiliation or social class,” Johnson said. “We are all on the same team, which is humanity. We have to change our perceptions to bring progress.”

Emphasis will be placed on educating the crowd on social ills that are particularly detrimental to women and girls, like Oklahoma’s incarceration rate that almost doubles the national rate, the high number of human trafficking cases along the corridor surrounding Interstates 35 and 40, the high death toll linked to domestic violence, the gender wage gap and state funding cuts to mental health services, human services and education. The goal is to boldly advocate for realistic, longterm policies, to stage a sea change.

“Let’s stop waiting for something to change and hoping for change,” Kanaly said. “Let’s start making those changes now.”