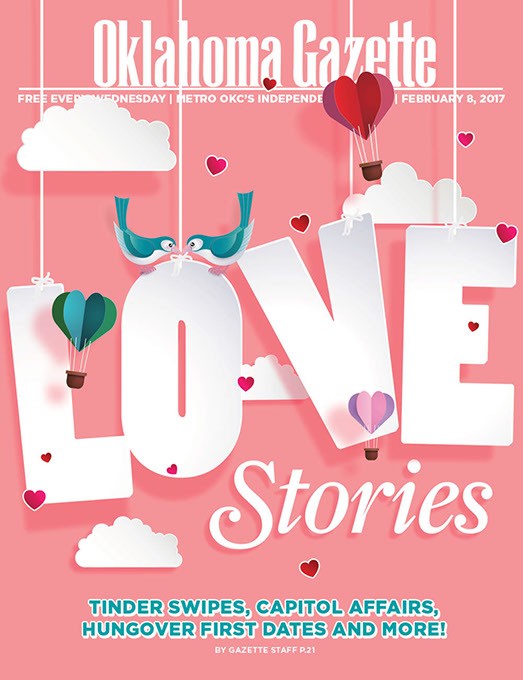 The funny thing about love is that so often, the reality behind a couple’s story is stranger than whatever fictional tale could be spun about the aim of Cupid’s arrow. “The one” always seems to show up when and where we least expect it. This Valentine’s Day season, Oklahoma Gazette’s resident love doctors — er, reporting staff — recently asked readers to share their strangest, cutest and most endearing stories of romance. From rare success in the hit-and-miss online dating world to back-up-plan proposals and holy matrimony inside the state Capitol, we offer proof that love always finds a way. 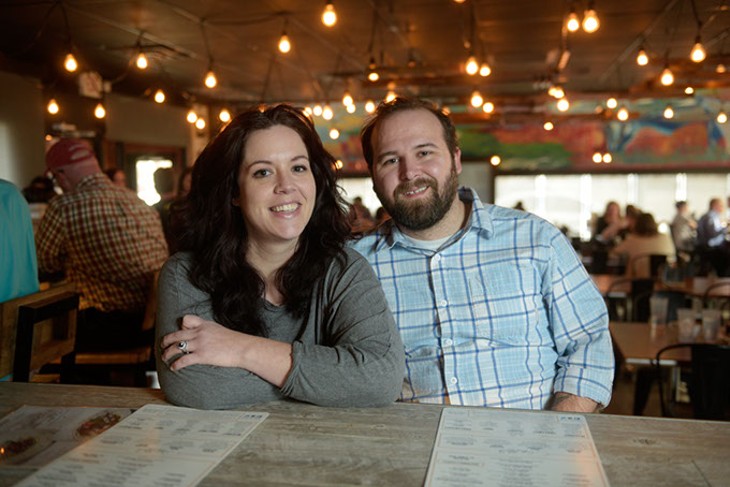 Shannon Sipes wasn’t looking for something serious, but she wasn’t looking to hook up, either. That makes the fact that she met her new husband Jordan Sipes on dating app Tinder, known for casual flings, all the more hilarious.

She had been on a few dates with another guy, but when he started describing how he wanted his wedding to be, she freaked out. They were at Norman Art Walk when she hatched a plan that might just crazy enough to work: get drunk and hope he hated her.

“He didn’t drink, so I thought if I got too drunk, he’d think I was horrible,” she said.

It turns out it wasn’t crazy enough to work.

“He thought I was super nice and sweet,” Shannon said.

In the meantime, she had been talking and texting with Jordan, but they had never met in person. She was hungover and not in the mood to socialize with anyone, but she didn’t want to blow him off again.

“I wake up and I’m like, ‘Great. I look a hot mess. Whatever. Take me as I am,’” she said. “So I drove over to Cafe Kacao and met him, and it was one of the most awkward meetings ever.”

They had planned to meet a few days prior, but they accidentally rescheduled it for the official day of romance, Jordan said.

Though she was hurting from the night before, Jordan said he immediately found her attractive.

“I saw giant hair and giant sunglasses,” he said. “I later found out she was hungover.”

Shannon said everything about the early days of their relationship seemed like it shouldn’t have worked out, including a fact he dropped during brunch.

“I was like, ‘Please don’t notice how sick I feel,’ and he was talking a million miles an hour,” Shannon said. “Then he completely says, ‘Okay; I’m divorced, too. I mean, not yet, but we’re in the process and I still live with my ex-wife, but in separate rooms.’”

Jordan said that he didn’t tell her on the phone, but he wanted to be upfront with her when they met. And it worked, Shannon said. His honesty was endearing, but she also knew from experience that going through a divorce means life gets so crazy it feels like no one will understand.

“There are so many weird things that happen that you cannot explain, the most bizarre things. I know some weird stuff happened to me,” she said. “I had a really good brunch with him. I drank a really good horchata latte, ate some really good French toast and we had a lot of things in common.”

So much in common that, about two years after their first meeting, they now share a last name.

Almost every proposal is unforgettable, but Jon Johnson wanted to take his to the next level.

Johnson was traveling with his current wife Mariah and other friends to the annual Lollapalooza summer music festival in Chicago. Jon loves Chicago, and heading in, he knew the big city exactly what he needed to make a moment that would last in time.

“It just came to me, ‘I want to be James Bond cool,’ so I was thinking helicopter,” he said.

Jon found a service that would take them up and over the city skyline on the music festival’s last day, where he planned on dropping the big question.

But just like any other Bond movie, things did not go exactly as planned.

A massive dark cloud rolled over them on the day of the flight. With it came on-and-off rain and insufferable humidity. A big thunderstorm was forecast for that night. Lollapalooza shortened and canceled shows. Jon’s helicopter pilot called and said the flight was off because the weather was looking bad. Things worsened after Jon checked his bank account and saw they had far less money than he expected.

It wasn’t the romantic day Jon planned. He was visibly down, and Mariah could tell.

She didn’t know the great extent to which the day had been going wrong.

Still, her positive energy was a boost. The couple returned to the hotel, got dressed up and took Mariah’s emergency $100 bill to Carmine’s Restaurant, a fancy Italian place in the city. Mariah thought it was their attempt to make the most out of a crummy day.

He saw it as a chance at redemption.

While in the restaurant, Jon told Mariah he had to use the restroom. Instead, he pulled the waiter aside and ordered a separate dessert with the little money he had left.

Jon returned to the table and told Mariah he just ordered cannoli.

“From the bathroom?” Mariah asked.

She wondered what kind of dessert one orders from a restroom stall.

Apparently, a pretty good one. When the cannoli were delivered to the table, Mariah thanked the waiter, not noticing the engagement ring resting on a dollop of whipped cream. When she saw Jon on one knee and finally processed everything that was happening, she cried tears of joy.

The couple has now been married for a happy three months.

“It wasn’t the most romantic lead-in,” Jon said, “but it couldn’t have ended more perfectly.” 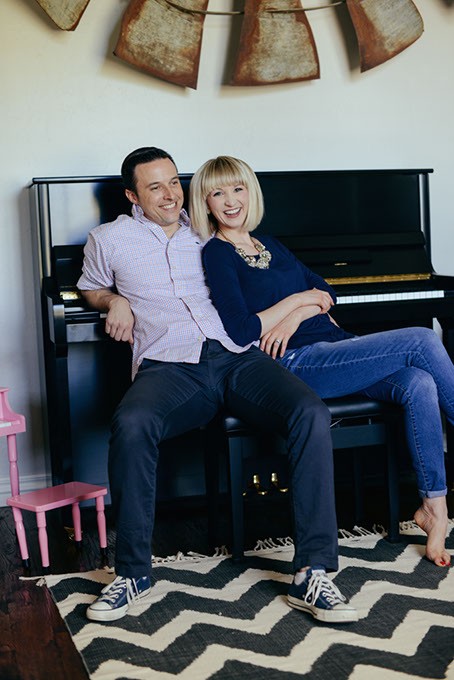 Kelli Depuy went to the Oklahoma Memorial Union at the University of Oklahoma to witness a trainwreck.

Tre Depuy went there to meet Kelli — and for an Applebee’s gift card.

“One of the events was a date auction,” he said. “The guys would be auctioned off, and we would get girls from different sororities to volunteer, or not volunteer, to be bid on.”

Kelli was one of those not-volunteers. She just went to see the spectacle. Growing up on a diet of terrible ’80s movies, she had plenty of fictional date auctions in mind.

“It was going to be a delightful trainwreck,” she said.

When she and her friend arrived, Kelli realized no one from their sorority, Delta Delta Delta, was represented. She was quickly conscripted into service.

“I grabbed the only guy there that I knew and I said, ‘You will bid on me, and I will pay you back,’” she said.

Tre did not know this. All he knew was he had seen Kelli around campus at a few events and was a little smitten. When she came up on the auction block, Tre was determined to win.

“It was very frustrating,” he said. “I’m a pretty shy guy, so I thought this would be an easy way to break the ice.”

As his intention to win the date grew more apparent, others continued to bid to jack up the price. Finally, Kelli gave her friend a signal that it was okay to stop bidding.

Afterward, they acknowledged each other but didn’t talk much. Tre had to go on stage to be auctioned off and while someone bid on him, he said, “she peaced out after that.”

A pre-date date was arranged to make sure Tre wasn’t going to murder her, Kelli said.

“He proved worthy and safe,” she said.

The couple was married in 2006. Now, they have a 3-year-old daughter named Kate and a little boy on the way. And, of course, they enjoyed that Applebee’s gift card. 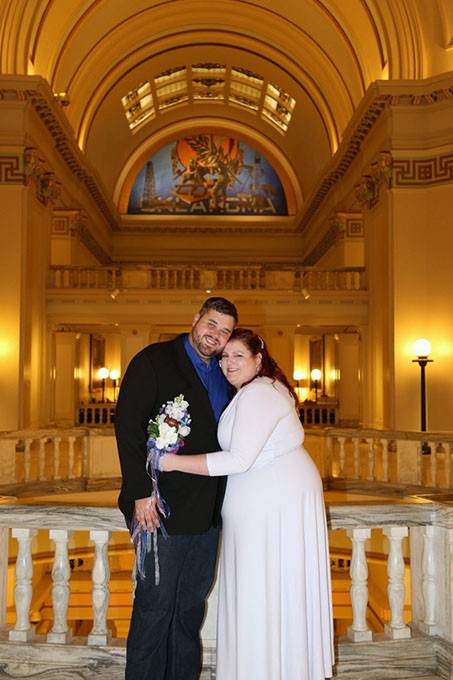 It wasn’t quite love at first sight, but Ceciley Thomason Murphy couldn’t deny she felt something when she was introduced to Jacob Murphy at the State Capitol.

“All I could think, as a tall woman, is ‘There is someone taller than me, and he is gorgeous,’” she said.

At the time of their first meeting, Ceciley, a Rogers State University (RSU) student, and Jacob, an Oklahoma Panhandle State University (OPSU) student, were among the participants in the Oklahoma Intercollegiate Legislature (OIL), a program that gives college students a chance to gain firsthand experience in the legislative process.

“We became really good friends over the course of a year,” Ceciley said. “We began to bond over the fact that we were both passionate about public education and making it accessible. He’s a Republican and I am a Democrat, yet we were able to come together on the issues.”

Politics and policies aside, time to travel between the two campuses was approximately six hours, a deterrent for dating. The two remained friends.

Three years ago, after surviving a car accident and being strapped to a backboard, a thought ran through Ceciley’s mind: “I missed my chance to go out on a date with Jacob Murphy.”

More than 350 miles away, news of the car accident traveled to Jacob, who quickly began to travel to northeast Oklahoma. When he reached Woodward, Jacob learned Ceciley was fine and would recover.

“He checked on me day and night,” Ceciley said. “I finally suggested, ‘Let’s meet in Oklahoma City.’”

Dec. 16, the two exchanged their wedding vows on the fourth floor of the Oklahoma Capitol, not far from where they first laid eyes on each other.

“I know it was possible to get married at the Capitol because of the weddings during OIL,” Ceciley said. “I wasn’t sure about the renovation schedule. We tried and tried.”

Eventually, the couple went for it, picking a date, inviting guests and gathering on the fourth floor, which is known for its artwork, to seal their bond.

“None of the artwork was up, so Sequoyah, Jim Thorpe and Will Rogers did not join us that day,” Ceciley said.

To honor her Cherokee heritage, the color blue was incorporated into their wedding details, and Tommy Wildcat, a well-known Cherokee musician on the river cane flute, performed.

The marriage ceremony represented the couple perfectly. As proud Oklahomans, the two encourage other couples to consider tying the knot in the people’s house.

“Just grab a minister or someone who has the power to do weddings,” she said, “get your friends together, meet at a spot and do it.”