Cover Story: Urban farmers cultivate community and a connection to the land 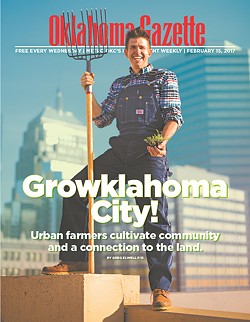 Area-wise, Oklahoma City is the eighth largest city in the U.S., ahead of Houston and Phoenix. At a hefty 606.4 square miles, it might seem like our modest 1.3 million population has nothing but room to wander.

“I grew up in the country, so I had access to a lot of land and a lot of space,” he said.

Living in the city, even one as spread-out as Oklahoma City, made him feel disconnected. Then he found gardening. As SixTwelve’s director of permaculture, he now helps introduce more people to the practice.

The community garden at SixTwelve, 612 NW 29th St., is one of a few popping up across the metro as more people become interested in sustainability, conservation and growing their own food.

Mays doesn’t talk much about his title, preferring instead to describe his role at the community education and art collective as “part-time gardener and part-time Pre-K worker.” 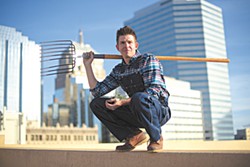 When he’s lucky, he said, those worlds collide.

“It gets kids to take a moment and go outside, even if they’re not interested in gardening as much as I’d like,” he said. “I want them to value the outdoors. When I look back on my childhood memories, I realize the influence nature had early in my life. I want to instill that in the next generation.”

None of the students are awesome gardeners right off the bat, but Mays said getting their hands in the dirt could make a huge difference.

Gardening started off as a hobby. Mays wanted to make his own salsa.

“It was a small garden, but I really enjoyed the peace I felt there,” he said. “It allowed me to drop a lot of stress.”

Home gardening soon became a passion, and he started spending more time planting, weeding and learning everything he could about how things grow. People began asking him to help them plan and build gardens at their homes.

One idea Mays became fascinated with is right there in his title: permaculture, the creation of sustainable agricultural ecosystems that require very little input. 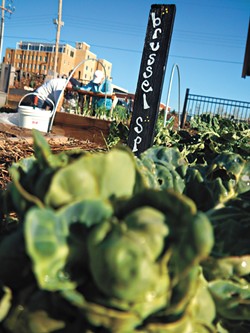 Mays said the best way to learn gardening is to do it. That’s not easy for people who don’t have their own space, though, so SixTwelve created a community garden.

“People are garden members, but we don’t have individual plots for everyone,” he said. “They can help out and volunteer to work on a Wednesday or Saturday.”

Mays plans what grows where, when to plant and when to harvest, but everyone who works reaps the rewards.

“We share eggs with members, and whenever we have produce, they get some,” he said. “It’s a shared garden more than a community garden.”

Planning Midtown’s Urban Neighbors community garden is more of a group effort, said garden co-chairwoman Shelley Pruitt. When the group meets March 11, members will pick and plan what to grow in the 10 raised-bed gardens for the next year.

Every Saturday, the group meets at 417 W. Park Place to work and welcome newcomers. The garden started in 2013, a few years after Pruitt moved downtown.

“In my business [as a mortgage broker], I found I was getting a lot of inquiries in housing downtown, and I started working with developers who were building condos,” she said. “I had one child left at home, so I asked him if he’d want to move downtown, and he said it would be fun.”

It was a great decision, but Pruitt said there was something missing: dirt. She and her son would walk around downtown, gathering up plastic water bottles and taking them to the recycling center, but she wanted to do more to make Oklahoma City sustainable.

So she found some partners. Urban Neighbors provides a budget, and Midtown Renaissance lets them use the land and water.

“When I met with [Midtown Renaissance president] Mickey Clagg, he said any land we use is still developable, so the garden has to be moveable,” Pruitt said.

Sometimes, as she drifts off to sleep, she dreams of loading the 10 raised beds her father built and the community compost pile into a U-Haul truck and moving it somewhere else and thinks, “Yeah, we could do it.”

Not that she wants to relocate. The Midtown community has embraced the garden, and people often just show up and ask to help.

“They’ll be at the dog park or having breakfast at Waffle Champion and just pitch in,” Pruitt said. “We’re connecting people with the community and the soil.”

CommonWealth Urban Farms of OKC cofounder and farm manager Elia Woods said she sees it, too, when people visit their farm at 3310 N. Olie Ave.

“We have a hunger inside of us to be connected to the natural world,” she said. “No matter how happy you might be at an office job, you still have that need.”

Like SixTwelve and Urban Neighbors’ garden, CommonWealth’s centralized location makes it a popular place for volunteers. Every Saturday from 9 a.m. to noon, the farm hosts CommonWork, which is a chance for community members to come by for a fun, hands-on experience.

“You don’t have to live in the country to have a big garden,” she said. “We’ve gotten such a fantastic and increasing response from volunteers. We hope we can help other people start their own market farms and urban gardens.”

CommonWealth sells its organic produce to families through its Veggie Club and to local restaurants, including The Red Cup, but Woods doesn’t worry about competition. She wants more people take to the land and grow food for themselves and others.

The zeal of volunteers has grown so much that the farm will launch an apprenticeship program this year that puts people in the mix for eight hours each week with a more specific curriculum. To offer it to more people, the program runs for three months at a time in spring, summer and fall.

“It’s for people who want to be a serious home gardener or want to learn the essential skills for growing on a larger scale,” Woods said. “It’s a chance to see if they really like it that much.”

Gardening is physical and mental work, and it requires an investment of time. But Pruitt said the benefits are glorious.

“For me, it’s a real meditation,” she said. “Tuesdays were my day to water, so I would go after the gym.”

She dragged the hoses around the gardens, usually over the course of an hour or more, and it became a time of reflection rather than a chore.

Mays said the same is true for many gardeners.

“I don’t know the exact science on that, but it’s in the realm of meditation,” he said. “You have to have serious patience to stick with plants all season long.”

While gardening is good for short-term mental health, it provides long-term good for the community and the planet, Mays said.

“I try to diversify what I’m teaching, like mushroom cultivation, and I’m branching out and learning about hydroponics,” he said.

He said water is essential to gardening and to life. While Oklahoma gets a significant amount of rain before and after summer in a few big rain events, much of the growing season is spent in drought.

“If I can capture as much of that as I can and store that, it makes a huge difference,” he said. “One of the city’s biggest expenses is pumping and treatment of water from Lake Hefner. If you capture water on-site, it doesn’t need to be treated.”

His advice: Get dirty and start small.

“The first step for a garden is not to overbuild it the first year,” he said. “Start with a 4-foot-by-8-foot garden. It needs to be small and manageable. It will become overwhelming if it’s too large.”

Put a few plants in and see how you do, Mays said. With enough space and a small investment, gardeners can supercharge their soil by making their own compost and extend the growing season with a hoop house.

Pruitt said it just takes a little effort to grow your own food.

“We have a few younger people and a few older people in our garden, from every socioeconomic level,” she said. “It costs nothing for them, unless they want to contribute.”

The next step for Urban Neighbors’ community garden is growing up, not out, Pruitt said.

“We’re going vertical with our space and developing it more every year,” she said.

That becomes possible because new generations of metro residents are returning to downtown but don’t want to lose their connection to the earth.

“People are growing more aware of where our food comes from,” Pruitt said. “This generation is a little more conscious and more interested in sustainable living. It’s easier to run to the grocery store, but gardening is more rewarding.”