“I will probably be one of the first girls who will try to compete against the guys if I can, if I’m on that same level,” she said.

In a back corner of Sunny’s Game Lounge, a group of young men hunch around three LCD televisions. The screens sit among a line of many against a red wall painted with video game characters. The Oklahoma City establishment offers an array of video games and consoles that guests play on an hourly basis.

Around 5:30 p.m. on a recent Tuesday, the men played Street Fighter V on Sony PlayStation 4 consoles. Some use standard controllers provided by the lounge, and others bring large, heavy-duty, rectangular boxes with dedicated joysticks and large buttons that resemble upright arcade games of yesteryear.

“They come out every Tuesday, and they just like to get together and play,” said Sunny Summon, owner of Sunny’s Game Lounge.

Along with renting televisions, video games and controllers, the venue sells drinks and snacks and offers a community area so gamers can hang out with each other.

Sunny’s also hosts tournaments. To those new to the world of competitive gaming, or eSports, the prizes and number of participants can be shockingly large. In late February, Sunny’s hosted a two-day event with multiple tournaments involving Nintendo’s Super Smash Bros. fighting game series. More than 300 participants from 14 states battled for a total prize purse worth approximately $7,000.

Twenty-seven-year-old New Jersey native Jason Zimmerman, known in the eSports world as Mew2King, is considered one of the best Super Smash Bros. players of all time.

He has earned just south of $150,000 in his gaming career, according to eSportsEarnings.com, a competitive gaming website. He also earns revenue from sponsorships. To many, Zimmerman attending a regional gaming tournament is like Kobe Bryant entering a basketball one-on-one contest.

Throughout the city, eSports and the gaming community are gaining momentum.

Sunny’s is one of multiple area businesses bringing competitive gaming to local residents across the state. To understand how high stakes can be for the Oklahoma gaming community and for gamers who desire to play professionally, one must understand how big eSports is outside of the Xbox in their living room.

Oct. 19, 1972, a Spacewar! tournament known as the Intergalactic Spacewar Olympics was held at the Artificial Intelligence Laboratory at Stanford University, according to “Today is the 40th Anniversary of the World’s First Known Gaming Tournament,” a 2012 post to Kotaku, a Gawker Media network gaming blog.

The lab was one of the few that housed a computer powerful enough to play the early video game. The winner received a year’s subscription to Rolling Stone magazine.

Amateur tournaments exploded in popularity after the advent of home video game consoles, especially Nintendo Entertainment System (NES), Super Nintendo Entertainment System (SNES) and Sega Genesis, whose influence began in the mid-1980s and lasted through the mid-’90s. Tournaments happened with regularity at local department stores and movie rental establishments across the country. Players who could maneuver Sonic the Hedgehog to capture the most rings within a set time limit received gift certificates.

The Nintendo-Sega era began to bleed into pop culture about that time, too. In 1989, The Super Mario Bros. Super Show! entertained 5-to-13-year-olds after school on weekdays with its Mario Bros. and The Legend of Zelda cartoons. That year, The Wizard, a film starring Fred Savage, told a story about three youths who travel down the West Coast to participate in a Nintendo tournament. Sonic the Hedgehog landed a TV series in 1993.

First, gaming wasn’t a phase, as many never outgrew the pastime. Consoles became fixtures in dorm rooms and apartments. The year 2000 introduced a new millennium and the first generation of adult gamers.

During this time, a wildly popular video game genre called first-person shooter (FPS) was born. The mainstreaming of the genre began on PCs with Wolfenstein 3D in 1992 and Doom in 1993. Classic Nintendo 64 James Bond game GoldenEye 007 hit the market in 1997.

The third revolution in gaming was, as with all media, the Internet. Gamers could test their aim, fighting chops and strategy against others across the world. They could share tips or gloat after Call of Duty matches. Social media expanded gaming communities and sprouted competitive tournaments and organizations.

This isn’t just an American story. The phenomenon spans the globe. However, a content-rich chapter continues to be written in South Korea.

For eSports, particularly strategic battle PC games like League of Legends, Dota 2 and Starcraft II: Wings of Liberty, the largest tournaments and prize pools are found in the east Asian country.

“They fill stadiums,” said Johnny “Icychiller” Weaver, perhaps Oklahoma’s best-known professional gamer, of South Korean eSports. “They have had events for up to $87 million.” 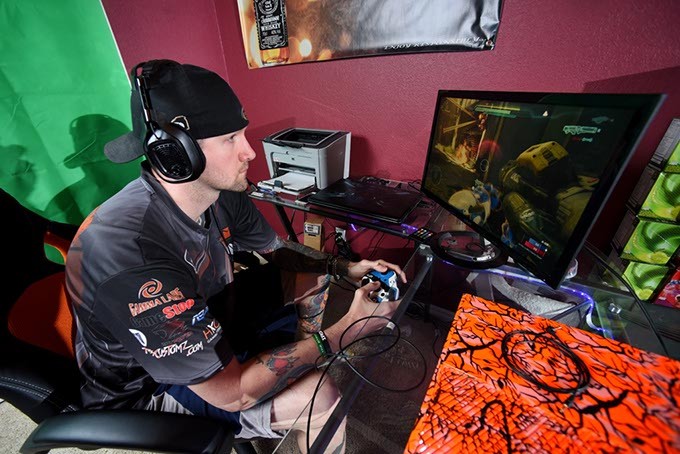 “My very first tournament was in 1992 at Blockbuster Video — Donkey Kong Country on Super Nintendo,” said Weaver, 31, who won the event. “You had five minutes to get as many bananas as you could.”

He went on to challenge competitors in Mario Kart and GoldenEye 007 tournaments, familiarizing himself with the winner’s circle. He participated in Major League Gaming’s inaugural event, now a major North American eSports organization that hosts world championships for Call of Duty, Super Smash Bros. and others.

Weaver read about the event online and traveled to New York City, where the tournament, hosted in the basement of league CEO and co-founder Sundance DiGiovanni’s home, consisted of just over 30 gamers.

Weaver earns his living playing eSports. Initially, the majority of his income was earned through competitions, especially with the first three Halo games on Xbox. However, after an accident left him with chronic back problems, he became a tournament organizer via his company Click Gaming.

“I do YouTube content for sponsors and host events, help with merchandise and distributing for them,” he said. “Most of my cash comes from out-of-staters wanting … knowledge on hosting LANs.”

A LAN, or local area network, is the technological backbone of any tournament setup. Depending on event size, eSports competitions might house three to dozens of gaming consoles, each with their own screen. Possessing equipment and network knowledge can make someone indispensable.

“In order to get good, just like in basketball, baseball, you got to play against other guys who are just as good as you,” McNeal said. “If you don’t, you are going to be only as good as your brother and sister.”

He also wants one of his key events, Summer Madness, to become part of the biggest stage.

“We want to make Summer Madness a Major [League Gaming event],” he said. “Hopefully if it gets big enough, it will be added to a large organization like Capcom Pro Tour.”

Capcom bills itself as a premiere destination for competitive fighting games such as Street Fighter V.

Oklahoma has a talent for playing eSports games. Weaver believes a Call of Duty: Black Ops IIII team named Ladykillers could go professional if it continues practicing and competing. The team includes Blake Borchers, 19, of Tahlequah; Cody Tinker, 20, of Inola; Tyler Grimes, 19, of Ottawa, Kansas (but soon moving to Tahlequah); and William Hetherington, 16, of Norman. They have made the rounds at regional tournaments and usually finished in the top two positions.

Success takes a lot of work.

“We practice most days for a few hours,” Borchers said. “We revolve our practices around Tyler’s work schedule.”

Competitive Call of Duty foregoes the “kill everyone” death-match game mode, instead favoring strategic modes with specific missions such as search-and-destroy, hard-point and uplink.

“For me, you have to have chemistry with your fellow players,” Hetherington said. “You have to build a bond.” 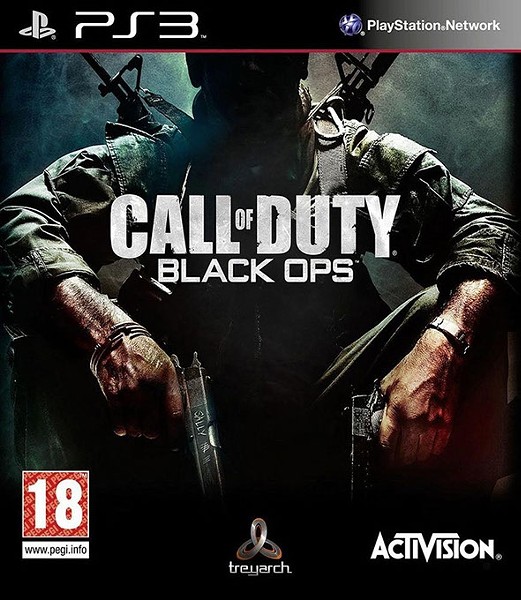 An aspect often missing from competitive gamer teams is female participation. It wanes around middle school.

“I’ve played video games since I could first hold a controller,” said Hoffman, 24. She grew up with Nintendo 64 and Super Mario 64, The Legend of Zelda: Ocarina of Time and GoldenEye 007.

Counter-Strike: Global Offensive, a popular tactical, first-person shooter PC game, is her game of choice. She said she has experienced positive and negative interactions in its online lobbies.

“Some people start to harass me,” Hoffman said. “Usually the ones who harass me are the ones that are doing worse than me. I have found that they don’t like to lose to a girl.”

“I will probably be one of the first girls who will try to compete against the guys if I can, if I’m on that same level,” she said.

She is creating a female gaming team. One of its members is Holly Cherry, who dates Arnold Marquez, owner of RTZ eSports in Oklahoma City.

Marquez wants Cactus Jack’s Family Fun Center to become a premier eSports arena for the Midwest. The establishment is phasing out older arcade and ticket games to make room for state-of-the-art flat-screen TVs and monitors. The arena will feature consoles from past and present as well as PCs.

RTZ eSports also hopes to bring big-time gaming to Oklahoma and often works with local organizations to accomplish this.

If Oklahoma’s gaming community has a unifying theme, Marquez said, it’s teamwork. Whether setting up the state’s largest gaming tournaments or meeting with friends to play Street Fighter V, gaming always has been and always will be about coming together.

Print Headline: Virtual sport, Video gaming gets serious as it morphs into a network of professional, dedicated eSports devotees.