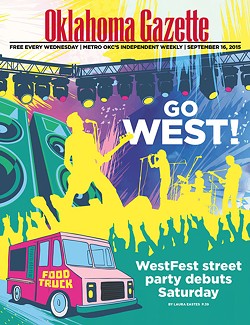 The first time Brian Haas heard about the inaugural WestFest, he knew.

The free, daylong street party flaunts the businesses that call the Western Avenue district home as it showcases the talented musical acts building Oklahoma’s music scene. It runs noon-10 p.m. Saturday along Western Avenue between NW 41st and NW 43rd streets, which will be closed to traffic as an expected 5,000 guests fill the corridor.

Haas, the founder of Tulsa’s Jacob Fred Jazz Odyssey (JFJO), remembers arriving in Oklahoma City during the mid-1990s to perform jazz-influenced music at VZD’s Restaurant & Club. At the time, Haas was looking for a place to get the band’s music in front of a local audience. He found the spot, along with listeners-turned-fans, at the Western Avenue club.

In recalling those early shows, Haas remembers a vibrant and diverse audience that emerged from neighborhoods nestled behind the historic merchant district. Mixed with restaurants, bars, boutiques, retail shops and businesses, it holds a long tradition of being a playground for city residents who embraced and encouraged local art and music.

In those 20 years, JFJO became a regular Western Avenue performer as it passed through on world tours and created more than two dozen albums.

When Haas was approached about WestFest, he knew it was the ideal spot to roll out the group’s two-month tour. It also coincides with the release of its comic book, The Battle for Earth, which features a download of its new album.

“During the first conversation, they made me want to do it because they are fans and they care about the music,” Haas said of event organizers. “It is great to be able to play for people that are building a cultural scene.”

Through initial discussions, its board members decided a music festival would highlight the area and expand community engagement by featuring local music, bringing fans out to listen and admire the area’s evolving streetscape project.

As construction began to install larger sidewalks, traffic-slowing medians, bicycle parking, lighting and new landscaping, committees developed, including one composed of musicians and music festival lovers. It set out to bring a variety of genres and crowd-pleasing acts with family-friendly sounds to WestFest. A total of 124 musical acts, each with Oklahoma ties, applied for a spot.

“It is a very big variety,” Taylor said. “We have 10 acts on the outdoor stage and nine acts on the indoor stage. The indoor stage is the eclectic stage … The main stage varies with everything from bluegrass and country all the way to alternative rock, singer-songwriter and hip-hop.”

“A lot of the acts are doing great locally,” said Kerby, a local musician performing as Chase Kerby & The Company Men and co-owner of the district’s 42nd Street Candy Co. “At the same time, they are great musicians. They’ve got great sounds, they’ve put in the legwork and they’ve played a lot.”

Jennifer Maynord, one part of folk act Willow Way, hits the indoor stage at 4:30 p.m. The OKC-based sisters seek out community gigs and have performed at Paseo Arts Festival, Edmond Arts Festival and OKC Festival of the Arts.

“Willow Way is locally focused,” Maynord said. “We want to be part of our local music scene and take part in local festivals and events. It is a really cool way to be part of Oklahoma City as an artist.”

Like Willow Way, a majority of the musicians play local venues and festival stages. Event organizers hope those acts bring their fan bases to WestFest but believe crowds will pile into the northwest part of the city for other reasons. An estimated 50,000 residents live within the immediate area of the Western Avenue district.

“The momentum gained before the event … shows people are excited,” Taylor said. “I’ve heard from so many people that they are excited for this type of event to be happening on Western Avenue.”

WestFest joins a number of seasonal festivals and events hosted by metro-area neighborhoods and merchant districts. Unlike other events that might invite outside vendors, WestFest features a children’s area, food trucks and drink offerings from local breweries to complement the live music.

Kerby said this festival flatters existing events in the city.

“The city is growing at an exponential rate, and the council is pouring money into the different districts, which is coming from the MAPS 3 projects,” he said. “Think of the city as one big house party, and we are just bringing some fun.”

Western Avenue, which begins at NW 36th Street and continues to Wilshire Boulevard, has much to showcase when crowds arrive Saturday.

Last fall, the association unveiled five murals strategically placed on district buildings. The public works were created by local artists and tied into the group’s Taste of Western Culinary ART, an event that brings guests to the area to sample cuisine from its restaurants.

In efforts to improve community safety and create a pedestrian-friendly street, in late 2014, the Oklahoma City Council approved a streetscape project along Western Avenue. While construction continues, WestFest crowds will notice larger sidewalks and traffic-slowing medians in front of Will Rogers Theatre at 43rd Street.

“It very recently became a community district,” Taylor said. “The area has really grown up in the last few years with the addition of Chesapeake Energy to the north side of our district. But at the same time, we have a historic side, and some of those businesses have been a foothold in the district for a very long time.”

As OKC’s music community also continues to flourish, event organizers believe WestFest will connect new listeners to music made in the state. It joins a list of regional events that include Norman Music Festival, OKCFEST and Backwoods Music Festival.

“Anything to get people out to shows is really important,” Kerby said.

He believes the addition of more venues would bring big acts to the area. Local musicians would also benefit from the invitations to open for those shows.

“Right now, [festivals] give local acts the chance to play in a different setting than they normally would,” he said. “It gives viewers a chance to come out to see bands for free. In that case, it can be a win-win for all parties.”

“I think [festivals] are great additions to our local music scene, and I know it will keep growing,” Maynord said. “I have no doubt.”

Haas said OKC residents are fortunate in the range of live music offerings.

“I think there is a diverse attitude to Oklahoma City when it comes to music,” said Haas, who has played across the U.S. and participated in seven European tours. “Every genre under the sun is located in OKC.”

At WestFest, a plethora of genres will be represented. The main stage is located between Western Avenue businesses VZD’s Restaurant & Bar and Beck’s Garage. A second stage is housed inside The Barrel, 4308 N. Western Ave.

JFJO performs at 9 p.m. on the main stage. The trio — Haas on piano, Fender Rhodes, bass and Moog; Chris Combs on lap steel, electric guitar and synthesizer; and Josh Raymer on drums — view this gig as a homecoming and a chance to celebrate their success, launched from the flourishing OKC music scene.

“I think in all three cities — Oklahoma City, Norman and Tulsa — there is a great starting point for something that could flower into a true cultural happening,” Haas said. “It is all about persistence.”

Print headline: Go West(ern)!, WestFest launches its inaugural street party with over a dozen bands and thousands of fans on Saturday.