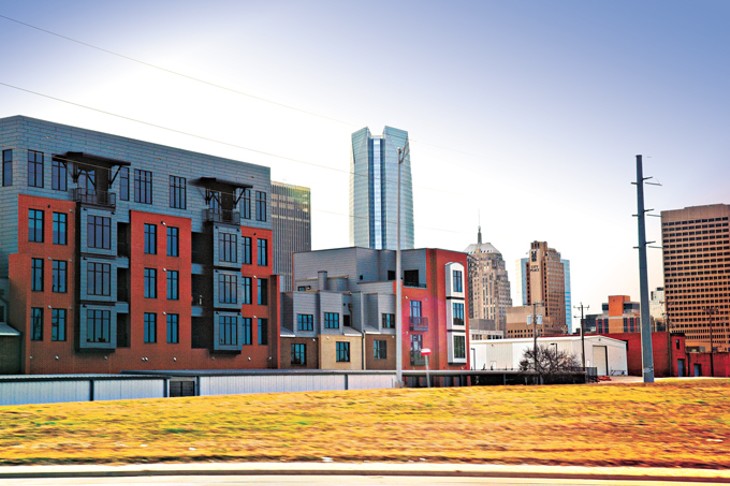 The 1989 blockbuster Back to the Future II depicted a 2015 with flying cars, hoverboards and self-lacing shoes. This year, Nike announced it’s making a self-lacing shoe, but many of the film’s predictions haven’t (and likely won’t) happen.

However, in many ways, 2015 is much more advanced than even Hollywood could have imagined.

“There aren’t any cellphones in the film. Instead, we see banks of phone booths,” wrote Adrienne Lafrance for The Atlantic in her piece “The Actual Future Is So Much Cooler Than Back to the Future II Predicted.” She also noted the now-obvious lack of Internet in the film.

Hollywood’s grandest predictions for city life 25 years from now would likely fall short, too. However, if Oklahoma City’s rate of change remains as constant in the next 25 years as it has been in the last 25 years, we will likely live in a city that’s much different than it is today.

Oklahoma Gazette examined demographic data, interviews with business and city leaders and dozens of reports, and the following is our best guess of how our city will look in 2040.

While we avoid talk of flying automobiles, it is likely that new technologies like driverless cars for consumer use could exist in coming decades. Business models like Uber and Lyft stretch the imaginations of city officials, and evolving city demographics will further impact everything from culture to politics. 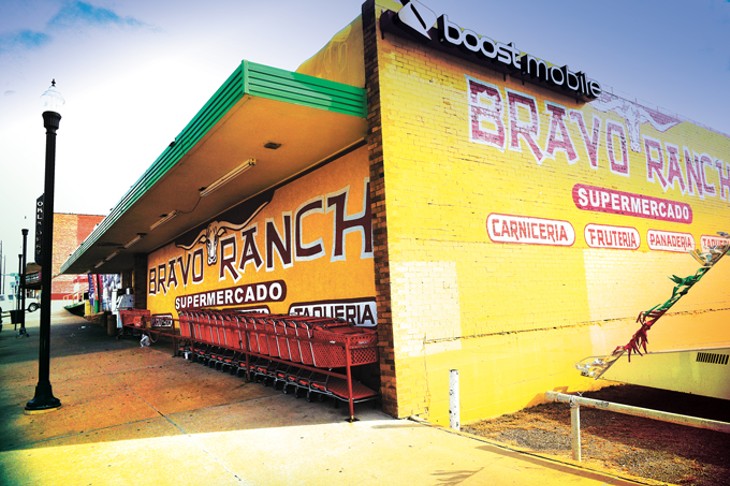 Oklahoma City is a 622-mile drive up Interstate 35 from the U.S.-Mexico border. This highway slices up America’s heartland and is a growing thoroughfare for Mexican immigrants who settle in mid-sized cities across the Midwest, including OKC.

In a series of 2014 dispatches for The New York Times, journalists Damien Cave and Todd Heisler filed reports along I-35, including a piece on Oklahoma City hamburger processing plant Lopez Foods. It’s a successful example of the city’s growing Hispanic and ethnic communities, including those from Korea and Vietnam.

“Everything is getting blurred,” John Patrick Lopez told the Times, referring to the multicultural blend of Lopez Food and OKC workers. “That’s the norm.”

In many ways, the diversity that has been an American standard for several decades just recently became more visible in Oklahoma.

An increase in visibility can often be seen via community festivals and sporting events, which bring together diverse ethnicities in ways not previously common here. But population trends over the past several years have created a city that, while diverse, remains segregated.

Oklahoma City’s next few decades will bring a growth of our immigrant community, a rise of cultural hubs and new challenges for city services and school systems that attempt to work with residents who do not speak English.

“We were once a black-and-white country,” Paul Taylor wrote for Pew Research Center. “Now, we’re a rainbow.”

Even as America champions itself as a melting pot nation, our multiculturalism is about to enter a new era. 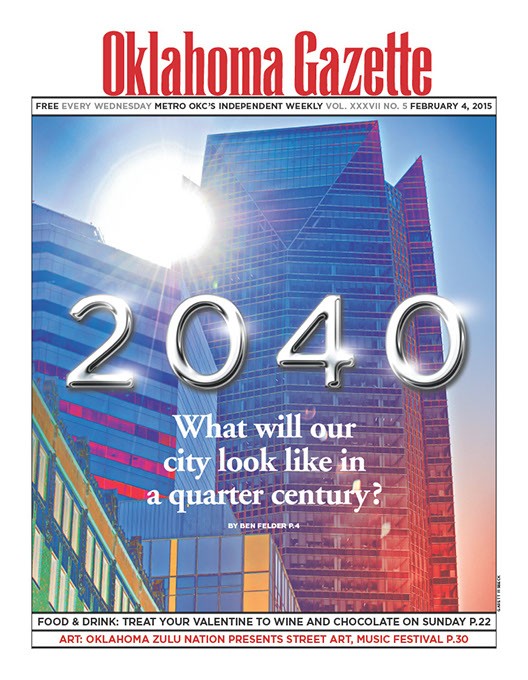 OKC’s Hispanic population expanded 95 percent from 2000 to 2010, which increased our city’s Hispanic population from 5.2 percent to 8.9 percent. The numbers will grow, but the rate depends on many factors, including state and national immigration policies and the continued viability of the energy sector.

Because OKC is expected to remain one of America’s cheapest places to live over the next 25 years, it should continue to be a popular destination for immigrants, especially those from Latin America.

“There is a good quality of life in Oklahoma City,” said David Castillo, president of the Greater Oklahoma City Hispanic Chamber of Commerce. “This is an attractive place for families, and that is something that is important to all people, including Hispanics.”

Castillo said he believes the shift will become more visible in coming years as groups transition from “hidden” communities mostly based in south OKC into bigger players in the local business community.

“We are starting to see the [Hispanic] community evolve,” Castillo said. “Before, what we had was landscapers working for other companies, many Hispanics working for roofing companies and in construction trade, stuff like that. Now they are becoming owners [of their own businesses], and that is the next step.”

The growth means the city must find better and more ways to communicate. These challenges already face local schools. Oklahoma City Public Schools’ student population is nearly half Hispanic, and 30 percent of its students come from homes where English is not the primary language.

“The school district really is just a small microcosm of what our community is and will be,” said Gloria Torres, an OKC school board member appointed last year. “Whatever comes into our city, we get to see it first. We are very much at the front line, and we are preparing our city.”

Like many medium-sized cities in the South and Midwest in recent decades, Oklahoma City’s foreign-born population has grown. However, most of our immigrant population growth takes place in urban areas, not suburbs.

“Three quarters (76 percent) of the growth in the foreign-born population [in America] between 2000 and 2013 in the largest metro areas occurred in the suburbs,” wrote Jill H. Wilson in a research paper for the Brookings Institution.

Oklahoma City was one of 12 cities across the country where foreign-born growth was larger in the urban core.

High on many residents’ list of reasons to love Oklahoma City is its relatively low traffic congestion. OKC ranks No. 44 out of the largest 51 metros for traffic congestion, according to data from the Texas Transportation Institute (TTI). However, many officials think the data-gathering methods used are outdated and don’t take into consideration how far motorists actually drive to work.

A report, Driven Apart: How Sprawl Is Lengthening Our Commutes and Why Misleading Mobility Measures Are Making Things Worse, evaluated distance traveled during peak times, such as morning and evening rush hours, and ranked the metro as the second worst in the nation for congestion.

Sprawl is projected to continue in OKC as Norman’s and Edmond’s populations — and commuters — increase. However, several area cities have been working on a regional transit plan that could reach voters in coming years.

“I don’t think that the type of regional transit [system] we envision for Oklahoma City is just around the corner; I think it’s a ways off [from completion],” OKC Mayor Mick Cornett told Oklahoma Gazette last year. “But keep in mind how far we’ve come.”

Cities like Charlotte and Nashville were added to the top 25 list for traffic congestion by TTI. They both experienced growth trends in the past decade that Oklahoma City will likely to see in coming years.

“The … metro is one of the fastest-growing metro regions in the United States,” said Eric Dyer, an assistant planner with the Association of Central Oklahoma Governments (ACOG). “With Oklahoma City poised to grow even more over the coming years, more severe traffic congestion is inevitable.”

ACOG proposed a regional, rail-based transit system that would feature streetcars in the urban center and commuter rail service to Edmond and Norman. Because city and business leaders in multiple cities across the region vocally supported the plan, it is realistic that some voters could be asked to approve a sales-tax increase for the system in five to seven years. Transit could be operational well before 2040.

City and business leaders say Salt Lake City’s regional transit system is one to emulate. It features a combination of rail and bus lines.

“There are a lot of similarities between Salt Lake and us,” said Roy Williams, president of the Greater Oklahoma City Chamber of Commerce, noting similar growth patterns and political culture.

The chamber supports a regional transit system, and Cornett believes area cities will start public meetings as early as this year to discuss the details and tax structure.

Our city’s expected growth might be impressive, but it’s nothing compared to north Texas. From 2010 to 2030, the 10-county region of the Dallas-Fort Worth metroplex will add a projected 4 million new residents, according data from Vision North Texas. That type of growth would be like placing eight OKCs in Dallas over 15 years.

North Texas’ growth will impact OKC’s future. The cities of Dallas, Houston, Austin and San Antonio were the four fastest-growing economies in the nation between 2008 and 2014, according to Brookings Institution. Oklahoma City was No. 5.

The Texas Triangle is one of 11 U.S. “megaregions,” as defined by the Regional Plan Association (RPA). Megaregions are clusters of cities with strong connections of commerce and travel. Other examples include Cascadia (Vancouver, Seattle and Portland), Northeast (Boston to Washington, D.C.) and Piedmont Atlantic (Atlanta to Charlotte).

The Texas Triangle includes Houston, Austin, San Antonio and Dallas, and RPA planners believe Oklahoma City could someday be included as transportation along the I-35 corridor continues to grow.

Numerous studies promising rail corridors based on current and future travel trends also support OKC’s future connection to Texas. The Rockefeller Foundation’s future high-speed rail study ranked hundreds of potential corridors across the country and scored the Oklahoma City-to-Dallas route high. In fact, OKC-Dallas was the fourth highest rated corridor within the Texas Triangle and viewed as a likely thoroughfare for increased rail service because of the growing connection the two metros are expected to have in the coming years.

Oil and gas are staples of our city’s economy, and while the city’s economic landscape is more diversified than it was in the 1980s — even after a dramatic drop in oil prices crashed OKC’s economy — the city is still heavily dependent on the energy sector.

The success of oil and gas over the past decade allowed OKC to weather the national recession. It also helped it become one of the few cities with steady employment growth since 2008. However, as prices have fallen, concerns arise about what that could mean for the city’s future.

“We are an energy economy,” State Treasurer Ken Miller said. “I enjoy like everybody else to pay less for gas at the pump, and it’s good for consumers for a while, but if it is sustained, we would feel other effects that would mitigate the positive feeling we get at the gas pump.”

The city is likely to remain an energy hub, but it might expand its role as not simply a location for such companies but a base for technology and research centers that look for ways to expand energy options and technology.

“New technological breakthroughs in oil and gas are transforming the world’s energy landscape in ways unimagined just a decade ago,” said Michael Ming, general manager of General Electric’s planned global oil and gas research center here. “The new center’s close proximity to many of our customers and the state’s great university network and engineering talent will allow us to accelerate the development of new technologies.”

The city’s future might include jetpacks and Jetsons-style buildings, and while those types of developments are hard to predict, it’s almost certain its future will be shaped by continued population growth, an emerging Hispanic community, new modes of transit and the evolution — for good or bad — of the energy sector.

Print headline: The next 25; Oklahoma Gazette examines the culture, population, transportation and industry changes that most impact our city.