From immigrants to lifers, this holiday, we’re all thankful that we’re Okies. 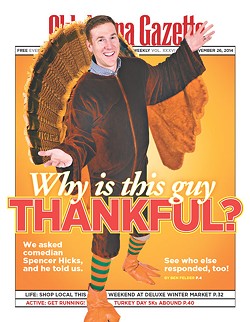 It’s easy to be thankful in Oklahoma City.

We know this because we asked.

Everyone here has a unique perspective on why this is a great place to call home. From athletes to artists, professional funnymen to wordsmiths, these days, it’s easy to be grateful for opportunity, creativity and maybe even the quirkiness we sometimes otherwise might complain about.

As family and friends gather around the table this week, here are five residents who are thankful to call this town home.

For a 27-year-old from north Wales, OKC is another world from his childhood home.

Since he moved here this year to play for the OKC Energy Football Club expansion soccer team, Gareth Evans has made OKC his long-term home and signed a three-year contract extension that could make him a local for quite some time.

“Everything about [OKC] is up-and-coming,” Evans said. “Everywhere you look, there are new things being built. And even with the Energy, we go to a new stadium next year and, long-term, are looking to build a soccer-specific stadium. I’m really excited to be here, and that was one of the reasons I signed the contract. It’s an exciting place to be.”

Evans enjoys living in a community that’s in the process of reinventing itself, but not every aspect of living here leaves him feeling thankful.

“The least favorable thing here was the weather,” Evans said. “Blowing, gale-force winds every day took awhile to get used to.”

Like most people who are grateful to call OKC home, Evans appreciates a local charm that is not always visible to the rest of the country.

“I came here with no expectations because a lot of people from outside of Oklahoma don’t say a lot of good things about Oklahoma,” said Evans, who has played soccer in Austin, Texas; Maryland and North Carolina.

“This is a good place to call home,” he said.

Jack Fowler came to OKC five years ago and decided to make a run as a full-time artist. That’s no easy task, but he is thankful to live out his passion in a city like this one.

Fowler sees OKC as a city where “sparks are flying” and there is a blank canvas, so to speak, to develop the city how he chooses.

“As a guy trying to do something on his own, I think places like New York, LA or even Dallas would be terrifying,” Fowler said. “I can’t imagine trying to hack your way through that in another town.”

Fowler realizes that his progressive politics might be more appreciated in another big city on the coast, and his pride for calling Oklahoma home is not a blanket statement on the entire state.

“We all know where we live, and as much as we like Oklahoma City right now, when we talk about Oklahoma City, we know we are talking about a small bubble,” Fowler said.

“But I’m thankful for the opportunity that we have here to fight for a counterculture, and I love that. We are Austin in 1971. We can do whatever we want to this town if we all recognize it.” 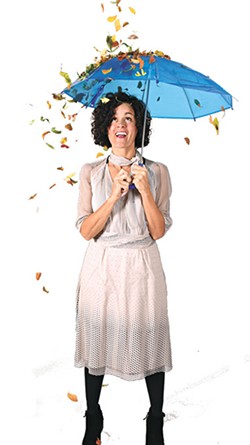 Tracey Zeeck: What we want

Tracey Zeeck, owner of Bumbershoot PR, is thankful to start each day at Elemental Coffee. In addition to the brew, she enjoys opportunities to connect with others in a space that is near and dear to her heart.

“I am thankful for Elemental Coffee because it is our town square,” Zeeck said. “I can’t go in there in the morning without finishing something on my checklist for the day because of the people I see there.”

“A big city with a small-town feel” is a moniker given to many medium-sized cities, but OKC perfected it. It’s not just that you might run into someone you know at a coffee shop; it’s that the interaction is likely to lead to some type of new idea for a business, festival or campaign.

“There is a feeling here that you can help create something,” Zeeck said.

High on most residents’ list is our low cost of living, which has important meaning to Zeeck.

“We get to own a home, own my office building and get to kind of do whatever we want in these spaces ... It’s still inexpensive enough to live here and do business here that we can carve out our niche,” she said. “I don’t have to take clients that I don’t believe in and do work that I don’t want to do because there is room for all of us.”

“How cool are all these things we get to do?” Zeeck said. “We love it here because it feels like change — a change that we get to make happen.

“Right now, we are literally doing whatever we want, and it is working. I’m thankful for that,” she said.

There are many things about Oklahoma that make poet Lauren Zuniga less than thankful. At the same time, she appreciates those things because they also give her inspiration.

“I am thankful to live here because there is such good writing material,” Zuniga said. “There is always something to be mad about.”

Zuniga travels to cities around the world — many of which are home to much larger communities of progressive citizens who share her views on life — to share her poems.

Even so, she is always happy to return home to OKC.

“I tour about four months out of the year. I travel so much that when I come home, it just feels great to know where the best taco place is or the best thrift store is,” Zuniga said. “It’s slower-paced here than a lot of the cities I visit to do shows.”

Zuniga’s poetry has become a rallying cry for many locals who share her love-hate relationship with this state.

“There is what the media perceives of Oklahoma, which is very backwards,” Zuniga said. “Then there is the Oklahoma that you and I actually experience, which is really cool people doing really cool things.”

Those “cool things” result in a dynamic city that Zuniga said makes her thankful to call OKC home.

“I get to watch this city change. Every time you turn around, there is always something new popping up,” she said. “And I’m thankful for that.” 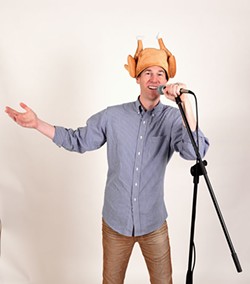 Spencer Hicks is grateful for traffic, or more specifically, the lack of it.

“Traffic plays a big part of that,” Hicks said about why he is thankful to call OKC home. “And, yeah, I guess also family and friends.”

Hicks, a comedian who worked for years to grow our local comedy scene, said there are times when he considers moving to another city.

“Usually, whenever elections come around, I think about leaving,” Hicks said. “But I love it here too much. It’s got pockets of cool everywhere. I just wouldn’t be happy anywhere else.

“I do try to stay away from political stuff when I’m onstage because I know most crowds won’t be on my side.”

Hicks has been a practicing comedian for 10 years and said OKC offers opportunities to grow that might be more difficult in more established markets.

“Oklahoma City is an amazing place to start,” Hicks said. “Having done open mics in Chicago and New York, I would have absolutely quit comedy [there] if that’s where I started. The comedy scene here is growing, but it is also very supportive. If you go to an open mic in New York, no one gives a shit. It’s just other comics in the crowd. Here, you find an honest crowd.”

Print headline: Bleeping awesome! From immigrants to lifers, this holiday, we’re all thankful that we’re Okies.

What our readers said:

I’m thankful to be a woman in America with opportunities and rights that are denied to so many in this world. — Laynie Llach

I am thankful for all the great songwriters I have worked with for the past 20 years. — Greg Johnson

I am thankful for my family, friends and OKC’s wonderful art community. — Michelle Metcalfe

I am thankful for my cat. — Gabriela Velazquez

Well, considering the election results, I guess I’m thankful I’m not radioactive or being eaten slowly by fire ants. — @BeardedSkeptic

I am thankful for the State of Oklahoma helping subsidize this poor boy from a true blue-collar background in Oklahoma and helping him realize his dream of going to both medical and graduate school. I couldn’t have done it without such, and it forever changed my life. — Brett Shepard

I am thankful for having Kari Tompkins in my life. — Anthony Tompkins

I am thankful for my super handsome and incredibly supportive husband. — @ferrrrn

I’m thankful for really great friends. I couldn’t live, work and raise kids here without them. I don’t have family here. It can feel daunting and a bit lonely at times, but I’m grateful for the network of friends I’ve been able to make. They are blessings in everything from work to dating to parenthood and all the stuff in between. — Jen Knight

We are very thankful to be able to make and sell our products in the great state of Oklahoma! — Sugar Sisters

I am thankful for my eyesight. Colors, shapes, textures, patterns — everything is eye candy! — Julia Summers

So very thankful that @JHarpman showed up to run 6 miles on the cold January morning in 2013 when we met. — Kristin Davis

I am thankful for my mom’s blueberry pancakes, because they are yummy. — @TheLittleBubble