Cover story: Why our lawmaking system is dysfunctional

Joe Dorman “loved every minute” of his time in the Oklahoma Legislature, but he admits he will enjoy 2015 as he finds himself outside of public service for the first time in 20 years.

“I think I have an opportunity to reflect and rest,” said Dorman just a few months after terming out of his House role and losing his state governor run.

Dorman’s two decades of work inside Oklahoma’s political machine proved to him it’s more dysfunctional in recent years than ever before.

“Term limits have dumbed down the process,” Dorman said. “You do not see [as many] legislators that understand the job responsibilities and really what they should be doing as a legislator.”

That doesn’t mean Dorman is against restricting years of statehouse service. He credits the 24-hour media cycle and an explosion of campaign funding for heightening partisanship and aiding our Legislature’s transition into a “dysfunctional body.”

Examples of Oklahoma’s legislative dysfunction are sometimes best found early in the session. Hundreds of bills and joint House and Senate proposals are pitched by 149 lawmakers from across the political spectrum.

This year’s oddest legislation contender might be the “hoodie bill,” which, if passed, could immediately outlaw the use of hooded clothing to conceal one’s identity. However, it’s debatable whether Senate Bill 13 would specifically ban hooded sweatshirts. The bill’s author says it won’t. The legislation is one of several legislative proposals in recent years to earn national media scrutiny, including one push to ban fetus- eating and another to allow students to form food into gunlike shapes.

“The new year brought a new Legislature in Oklahoma, and it’s wasting no time destroying what’s left of civil liberties in the deep-red state,” wrote Mark Joseph Stern of the proposed hoodie bill in a Jan. 12 Slate column.

Dorman said he believes Sen. Don Barrington filed the bill because protesters wore masks last year at the capitol, which made some lawmakers uncomfortable. Several area pastors protested the bill by wearing hoodies in their pulpits. 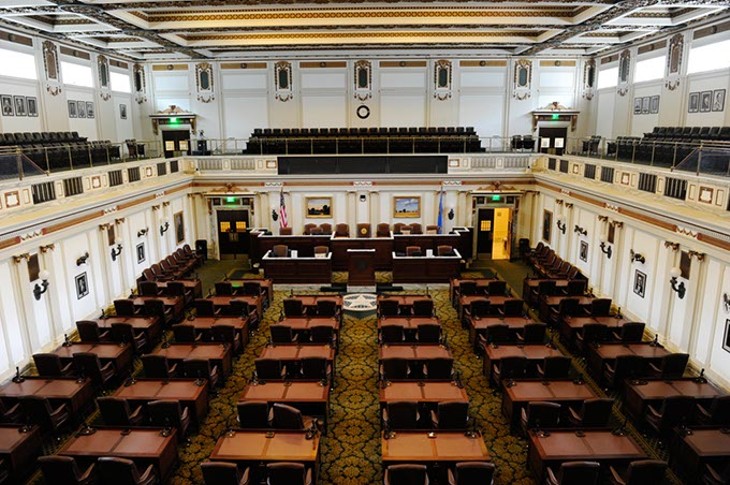 “The bill, as written, takes direct aim at the Guy Fawkes masks that were used as part of the Occupy movement, and hoodies, which became powerful symbols after the death of Trayvon Martin and as part of the Black Lives Matter movement,” Oklahoma Rev. Jesse Jackson (unrelated to the civil rights activist) told Religion News Service.

Media outlets run with these types of stories. However, our state also faces serious issues in this session. A projected $300 million budget shortfall, low academic performance, teacher shortages, poor health outcomes and dozens more challenges will require much of the Legislature’s attention.

The Legislature’s critics point to the proclivity to hyper focus on trivial legislation as one example of how our lawmakers are headed in the wrong direction. Then again, maybe the problem is the media attention frivolous bills receive compared to ones dealing with more mundane — but more critical — matters.

“[The media] used to be the referees and educators of the issues and breaking down the walls and spin,” wrote Daily Kos in a post on the media’s role in political dysfunction. “[Now] they fill their time with ginning up something called resentment politics to keep people coming back.”

In a highly competitive media landscape, stories on outlawing hoodies might be easier to attract readers and viewers with than reports on budgetary items and health standards.

With its coverage of heavily partisan politics, the media also might exacerbate the public’s hunger for political showmanship. Last year, Pew Research Center reported that America is more partisan than ever before.

“The share of Americans who express consistently conservative or consistently liberal opinions has doubled over the past two decades, from 10 percent to 21 percent,” said Carroll Doherty, director of political research at Pew. “As a result, the amount of ideological overlap between the two parties has diminished.”

While lawmakers and media deserve blame for dysfunctional lawmaking, so do voters, and there are fewer than there used to be.

“Oklahomans are patriotic, but our voting record is undermining that reputation,” said Sen. David Holt, R-Oklahoma City, who has proposed a series of bills to help increase voter turnout. “Our plunging levels of civic participation are reaching crisis levels.”

Some of Holt’s bills would allow for mail voting, consolidating local races into fall and spring dates and providing online voter registration.

More than 70 percent of Oklahoma’s eligible voters participated in the 1992 presidential election. Twenty years later, turnout dropped to 52 percent. One- third of eligible Oklahomans are not registered to vote.

Lawmaker turnover, a salacious media culture and low voter turnout combine to challenge our state’s political culture. But for those who devote their lives to public service, there is hope for positive change.

“It’s a tough time right now, but I think there are ways for us to move forward,” Dorman said. “It’s grown more dysfunctional as time has gone by, and it’s not because of the political party changes. The duplication of the attitude that we see in Washington, D.C., is to blame, but I think more people are growing tired of that culture.”