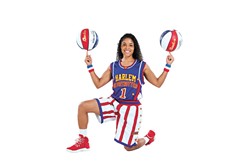 Ace Jackson is in her third season as a basketball player for the legendary Harlem Globetrotters, a team of goodwill ambassadors charged with spreading basketball and smiles to fans around the globe.

She will arrive with the team in its return to Oklahoma City for a game against rival team and perpetual underdog Washington Generals 2 p.m. Feb. 10 at Chesapeake Arena, 100 W. Reno Ave. Tickets are $24-$170.

Jackson, known on the court simply as Ace, is one of four female players on the current Globetrotters roster. Though some unfamiliar with the team might be surprised to hear it includes female players, Globetrotters have a lengthy legacy of including women.

Lynette Woodard made history in 1985 when she became the first woman to play with the team. Several other female players followed in her footsteps, and Ace is the 13th woman to don an official Globetrotter jersey.

“When people come to the games, they’ll see how well we play on a team with the guys,” Ace said. “We like to say how we women are just as good ballplayers as the guys on the team. We’re all ballplayers; we all love the game; we all love what we do. We just happen to be women.”

Ace said she sees a lot of young girls at the game but added that pretty much every type of person can be found at a Globetrotters game. She is aware of her status as a role model for younger fans and likes hearing positive words not just from girls in the crowd, but young boys as well.

“They come up to me and they’ll always say, ‘Girl power!’” she said. “I love hearing that. I love the sense of empowerment that we bring to the team.”

Life is not always fun. Ace knows this and welcomes the chance to provide a distraction from the day-to-day grind.

“They come to our game and they forget all those things that are going on,” she said. “All they know is that they’re having a great time with their families and with their friends. It becomes a lifetime memory.”

Ace’s father began teaching her how to play basketball when she was 7 years old. At around 11, she was already starting to spin the ball on her finger and pick up some other basic basketball tricks.

Aside from humor and showmanship, the Globetrotters are known for demonstrating expert-level basketball tricks on the court. YouTube and the internet have spawned a golden era for interest in trick shots and fancy dribbling. Young players now have the opportunity to learn from the best from the comfort of their homes.

“Back in our day, when you had dial-up internet, it was more like you had to see it in person or pick up a DVD that was specifically made for basketball,” she said. “Kids these days have a wider base to learn from.”

Ace likes how young basketball enthusiasts have more resources at their disposal. She makes it a goal to stay active on social media with tips of her own.

She owes part of her career with the Globetrotters to current teammate Chris “Handles” Franklin. Both players grew up in Harrisburg, Pennsylvania. Ace would attend basketball camps held by Handles in the city. One day, when the Globetrotters were having tryouts, he invited her to compete for a spot.

“I thought it was a joke at first,” she said. “But he was like, ‘No, they’re really having tryouts.’”

Ace aced her auditions and has traveled the world with the team for the past three seasons. She still remembers seeing her first Globetrotters game when she was 10. She has a photo of herself getting an autograph from Sweet Lou Dunbar, who is now one of her coaches on the team.

“Now I’m on the side where I’m not getting an autograph, but I’m giving it to others,” she said. “It shows you how my world has just turned upside-down for the better. I never thought I would be in this position.”

It goes without saying that travel is a big part of what the Globetrotters do. Ace said the team plays 300 games a year with tours that span across North America, South America, Europe and elsewhere.

With all that moving, it makes staying in shape and keeping the body sharp for the long grind a challenge. Ace was a professional trainer before she joined the Globetrotters, so fitness is particularly important to her.

“Time is very precious for us,” she said. “Our schedule is very hectic, so for us, it’s more about maintaining.”

She said some players on the team stay fit with mobile TRX System suspension training equipment. An expert training staff keeps the players’ shoulders and joints sharp for the long season.

Ace said she is a big proponent of high-intensity interval training methods, often called HIIT. These types of exercises, often utilized by long-distance runners, are able to squeeze a more efficient exercise session into a smaller time window with short but explosive bursts of energy.

“It’s not long, but it’s intense,” she said. “You’re sweating, you’re getting active and you’re working out, but it just doesn’t take as long.”

Ace advised young basketball players to establish a good work ethic if they would like to play professional ball someday. She is forever thankful for the long hours she spent training with her dad because they helped her realize her greatest dreams.

“Your talents and your strengths and your abilities aren’t going to be handed to you,” she said. “You’ve got to work to get better.”