COVER The rise of conspiracy theories

Conspiracy theories have always been a part of American lore but the internet and social media exponentially increased both their visibility and their appeal to the point where even the president of the United States is quoting them.

Conspiracy theories are as American as apple pie. Just after the fires of the American Revolution had smoldered, rumors of the Bavarian Illuminati began spreading in New England. At the same time, theories of the Freemasons' control of the country was reported due to construction techniques in Washington, D.C., which was under construction. These and adjacent conspiracy theories were widely represented in American politics — electoral and otherwise — through the 19th century. In the 20th century, there were conspiracy theories about faked moon landings, hidden alien spacecraft crashes and encounters, as well as a number of theories about the assassination of John F. Kennedy. While baked into the American mythos, only in recent years have such theories become ubiquitous in the daily culture, as social media give them new life and the president breathes life into them for his base. At a time when a deadly novel virus holds the country in thrall, theories about its origin, its spread and governmental and societal reactions to it have become rampant, with many making potential life and death decisions based on which side of the issue they stand. Jim Foster straddles both lines. While he believes that COVID-19 is not only real and deadly, he also thinks that its appearance has allowed shadowy political cabals to gain further foothold in the culture. Foster does not dispute the fact that hundreds of thousands of Americans have died due to the novel virus, which appeared in China last winter. His own father is among those who have lost their lives to its deadly effects. But to Foster, the masks signify something much greater than a flimsy barrier to trap respiratory droplets. "From the very beginning, I haven't worn a mask," Foster said. "People were going, 'You'd be wearing a mask if your dad died.' Well, let me tell you some about my family. My uncle was in the Air Force. He was a doctor. A surgeon. A United States Air Force doctor. My stepmother, an ICU nurse for 45 years. I already knew this instinctively. I knew that masks don't do anything. It's a control mechanism. And the analogy that I got was that stopping the virus with a mask was like trying to stop the mosquito with a chain-link fence, so there is no benefit for a mask. We can always have that debate about how viruses spread, what they are, all that kind of good stuff. And just FYI, my dad contracted COVID. He went to Mercy Hospital for something else. He contracted COVID in the hospital where everybody wears masks. He went there for something else, got COVID and died. There you go. This whole what I call a sham of a virus was to crash the US economy, to usher in mandatory vaccines. Hello, Bill Gates. The Bill Gates Foundation and to usher in the goal of digital currency and then on top of that, the one-world government. That's kind of the byproduct of it. But they're just going to all one total domination of the United and globally." 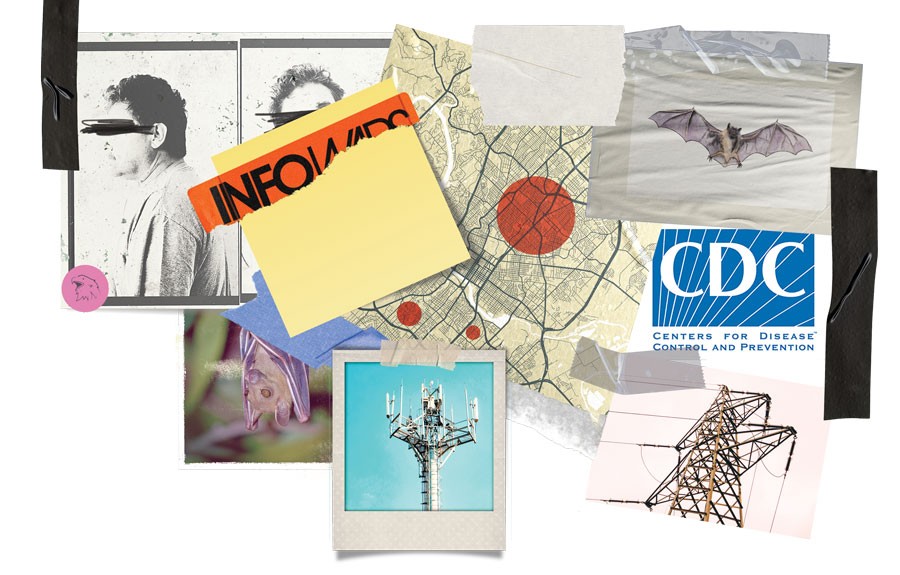 This line of thought is not a new one, and Foster mentions some of the most common talking points of this umbrella theory of a globalist elite that is taking control of the planet one step at a time. Some signposts along the way are George H.W. Bush's "new world order" speech as well as surrounding the events of Sept. 11. For Foster and many others, this theory also encapsulates elements of Christian belief as well as occult systems like numerology, though he says his personal beliefs are irrelevant. "You have to realize that the people that are running this show are Luciferian control people. They believe in the devil and they believe in a god. This goes all the way back to the Jesuits in the 1500s. I want to get that clear. It's like I'm not coming at this from a religious standpoint, or monotheistic standpoint at all," he said. And politically, he also straddles lines. "I'm not left or right. I'm more of a, I guess what you call a libertarian. I say, legalize everything. Let's let people make their own decisions in their own life and then fiscally, just stay out of my back pocket. I don't need the government telling me what to do with my money," Foster said. Foster's beliefs closely align with those of Austin conspiracy theorist Alex Jones. Jones was a fixture of the Texas capital city and college town, where he was known to drive around town with a megaphone when he wasn't hosting his fringe radio program. Former U.S. Congressional and libertarian presidential candidate Ron Paul was a repeat early guest on the show. Jones moved firmly into the arena of conspiracy theory after the Oklahoma City bombing and gained a broader following after the 9/11 attacks. A fringe figure known for explosive outburst and confrontational, in-your-face barrages, Jones received Donald Trump as a guest during the 2016 presidential campaign and was later deplatformed by most social media for his proliferation of misinformation. While Foster has the same amount of energy in his delivery, he is decidedly different from Jones. When challenged, Foster doesn't become confrontational or defensive but works through the discussion to find common ground. He said he spent more than a decade in Los Angeles and now works in real estate, among other ventures. Affable and engaging, he comes across as a colorful character, a reasonable man with some less reasonable beliefs coupled with savvy social skills. Were you to find yourself seated next to him over a happy hour cocktail, you'd be more likely to end the exchange with a swap of business cards rather than a rushed, flimsy excuse. Foster views Jones and QAnon, the most popular current conspiracy theory faction, largely as a red herring, or "false flag" in his eyes to distract from the globalist elite conspiracy. QAnon was born from the ashes of the "Pizzagate" conspiracy theory, which played like a humorless version of the scene from the 1984 film Peewee's Big Adventure, in which Herman is told that his stolen bicycle can be found in the basement of the Alamo. The Alamo, of course, has not basement and neither does Comet Ping Pong, the Washington, D.C. pizzeria that was supposed to be the epicenter of a Satanic child-trafficking conspiracy involving liberal elites like John Podesta and Hillary Clinton. It was definitively revealed that Comet Ping Pong, too, had no basement when a man fired shots inside while attempting to free enslaved children and was subsequently arrested. He was sentenced to four years in prison. The pizzeria was set aflame by an arsonist armed with the same conspiracy. He, too, pleaded guilty.

Both "Pizzagate" and QAnon arose from the "chan" boards, with the former being promulgated through 4chan and the latter through 8chan, as well as on social media. For the conspiracy theory literate, the QAnon phenomenon is nothing new. It reads almost exactly like one of the earliest modern conspiracy theories, The Protocols of the Elders of Zion, written by Russian propagandists at the turn of the 20th century. Protocols was the modern manifestation of the "blood libel" that arose in the Middle Ages. To wit, there is a cabal of ritualistic murderers using the blood of children to gain control of the population. To the authors of Zion, whose work was later adopted by the Nazis, that group was the Jews. To the QAnon crowd, the same deeds are ascribed to the liberal elite through a process known as "spirit cooking." To QAnon, the impending roundup of these cannibalistic pedophiles will be known as "The Storm." The description of the purported atrocities ascribed to the Jews were published a Nazi propaganda newspaper published by a citizen sympathizer. Its name? The Stormer. Its publisher? Hanged after World War II for crimes against humanity. Flashing forward, the QAnon set of theories spread like wildfire during the shutdowns that the country endured in the spring. On March 30, the Pew Research Center published the results of their poll showing that 76 percent of the country had not even heard of QAnon. Pew on July 24 published a poll showing that not only had 71 percent of the country heard about the group, but 24 percent of adults polled thought that there was at least some truth to it. In the length of just one presidential term, conspiracy theorists have gone from relative obscurity to an instrument of Donald Trump's campaign via appearances on Alex Jones' program to retweeting many of the theories they advance. And in the length of the pandemic to date in 2020, the shift has been made from three-quarters of the country being ignorant of them to a quarter of them confessing belief in at least some of its tenets. The shift is panicking not just academics, but the technology industry. In the recent Netflix documentary, The Social Dilemma, architects of the social media world most of us inhabit daily have expressed reservation, if not outright horror, at the speed with which disinformation now spreads throughout the social sphere. For example, when Pizzagate began being spread via Facebook users during the 2016 presidential election, its algorithm picked up on it and began recommending those posts. "As the groups got bigger on Facebook, Facebook's recommendation engines started suggesting to regular users that they join Pizzagate groups. So if a user was, for example, anti-vaccine or believed in chemtrails or had indicated to Facebook's algorithms in some way that they were prone to conspiracy theories, Facebook's recommendation would serve them Pizzagate groups," said Renee DiResta, the technical research manager at the Stanford Internet Observatory. "We've created a system that biases towards false information. Not because we want to, but because false information makes the companies more money than the truth. The truth is boring," said Sandy Parakilas, a former Facebook operations manager, in The Social Dilemma. Reality is far more mundane and can most often be explained by Occam's Razor, which states that the simplest solution is usually the correct one. About the same time comic book writer Alan Moore was penning Watchmen and V for Vendetta, he was also commissioned to write a graphic novel about the history of the CIA. In a documentary about his work, The Mindscape of Alan Moore, he summed it up thusly: "What I learned during the frankly horrifying research that I had to slog through to accomplish this, was that yes, there is a conspiracy. In fact, there are a great number of conspiracies that are all tripping each other up and all of those conspiracies are run by paranoid fantacists and ham-fisted clowns … The main thing that I learned about conspiracy theory is that conspiracy theorists actually believe in a conspiracy because that is more comforting. The truth of the world is that it is chaotic. The truth is that it's not the Jewish banking conspiracy or the gray aliens or the 12-foot reptiloids from another dimension that are in control. The truth is far more frightening. Nobody is in control. The world is rudderless."