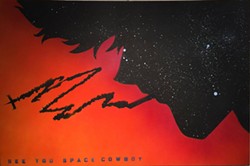 In the year 2071, bounty hunters track criminals across the solar system as they hide among the rocky moons of planets. During downtime, the hunters hang out at bars infused with jazz and blues music, waxing philosophically about the state of themselves and society.

It’s not often an art show chooses a theme based on an animated series, much less one the average American might not recognize. Then again, Hardboiled Space Boogie: A Cowboy Bebop Art Show isn’t your typical exhibition.

“These art shows, to me, are mini festivals,” said comedian and show creator James Nghiem.

Hardboiled Space Boogie is the latest in a series of themed art shows produced by Nghiem. The first, H-O-R-S-E, was based on the basketball game. In October 2015, he created Fierce Punch, an exhibition influenced by Street Fighter, a popular gaming franchise. Last February, A Very Wes Anderson Art Show had most guests dressed liked characters from Wes Anderson-directed films.

“There were so many Margots,” Nghiem said, referring to Margot Tenenbaum, Gwyneth Paltrow’s character in The Royal Tenenbaums.

Cowboy Bebop aired in Japan from September 1997 to June 1998. The series’ 26 episodes chronicle a space bounty hunter crew led by protagonist Spike Spiegel. A former member of the Red Dragon crime syndicate, Spiegel faked his death to escape the organization after falling in love with Julia, the girlfriend of Red Dragon’s leader, Vicious.

The series explores the philosophy and meaning of life’s emotions as the squad battles lethargy and feelings of cynicism toward society and the past. Cowboy Bebop hints at Western drama styles, including pulp fiction, film noir and American Western.

“It’s a very eclectic series. It’s transcendent,” Nghiem said. “There’s not a lot of Japanese humor in it. It’s a lot of whiskey drinking; it’s a lot of jazz.”

Hardboiled Space Boogie features work from 20-30 local artists including Micah Moad, Kassy French and Michael Tran. A portion of each sale will be donated to Regional Food Bank of Oklahoma.

Nghiem said not all of the participating artists are thoroughly familiar with anime.

“I told them to create art through this lens,” he said. “I tried to get people out of their comfort zones. Even the artists. I’m trying to pull people in different directions.”

“It’s going to be a very intimate setting,” Nghiem said of the comedy show. “Maybe 15 seats.”

Nghiem was inspired by an exhibition he attended while living in Los Angeles in which all the work was influenced by Teenage Mutant Ninja Turtles. His only qualm with the event was that it was only an art show.

After moving back to Oklahoma City, he staged H-O-R-S-E. In hindsight, the show was a glorified test run. Nghiem returned with Fierce Punch at 51st Street Speakeasy. Around 150-200 guests attended, and Nghiem’s style began to fall in place.

“I wanted to do it different from them, to where it wasn’t just an art show,” he said. “I wanted it to feel like a festival, like an experience. So I had DJs, I had cosplayers show up, I had retro video games going on.”

Nghiem believes 800-1,000 guests attended A Very Wes Anderson Art Show. He said his purpose behind the events is to have a good time and to bring people from different backgrounds and areas together to create.

“I see people out on festivals and shows, and it seems like everybody is closed off in certain bubbles,” he said. “This [event] is my way of taking people out of those bubbles.”

Nghiem said Oklahoma City should take advantage of what it is: a metropolitan area with a wide array of people and interests, yet not overcrowded. In the end, he wants to entertain people and feels this is the perfect place for that.

“LA doesn’t need guys like me,” he said. “Here, when I put on a show, it matters more to people. It amps people up.”