Social Capital’s love of craft beer does not end with its 120 taps, as beer-can pulled chicken and beer ice cream highlight its food menu. 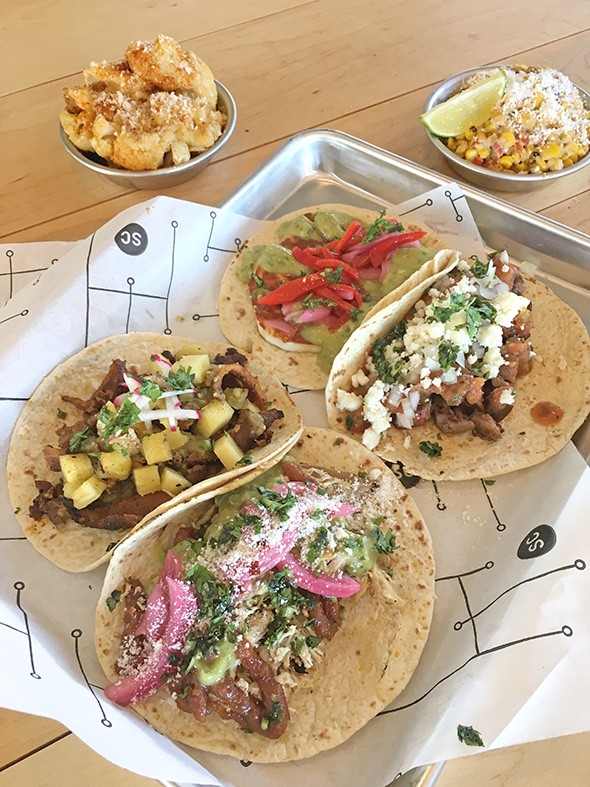 As guests arrived at the grand opening of the first phase of Scissortail Park in downtown Oklahoma City, Social Capital was ready to offer the city’s largest commitment to independent craft beer with an inventive food menu.

Founded by Community through Beer LLC, the same group behind The Patriarch Craft Beer House & Lawn in Edmond, Social Capital, 517 S. Hudson Ave., celebrated its grand opening Sept. 21 after a two-year process that transformed an old filling station and transmission shop into a 30,000 square-foot space with multiple patios, two kitchens and 120 beers on tap.

Community through Beer is the product of friends who bonded at church through a love of craft beer, said co-owner Brad Mullenix. They opened The Patriarch as a side project and a labor of love because they wanted the city to have more craft beer options. Social Capital expands on the concept started by The Patriarch but adds more dining options and more taps.

Mullenix left his full-time job in the oil and gas field to work with The Patriarch full-time and find its next location. Community through Beer took over the space that is now Social Capital two years ago with the idea of getting it ready for Scissortail Park’s grand opening weekend.

Outside The Patriarch and Oak & Ore, Mullenix said there isn’t another concept in the city that offers a 100 percent selection of independent craft beer.

“Even five years ago when we opened The Patriarch, we had only 13 Oklahoma breweries,” Mullenix said. “We’ve lost one (Mustang Brewing Company), and we’ve gained 25 more. It’s crazy how it’s blown up.”

"We’re supporting people we know that are in a 15-block radius of here. We’d rather put money in their pockets." — Brad Mullenix tweet this

Social Capital celebrated its grand opening with all 120 taps pouring Oklahoma beer, but that selection will add out-of-state brewing as long as they’re independently owned and haven’t sold a portion of their businesses to a large brewing company.

“I think Oklahoma’s brewing scene per capita is one of the best in the country,” Mullenix said. “We’re supporting people we know that are in a 15-block radius of here. We’d rather put money in their pockets than somebody who has sold out of Anheuser-Busch or Coors or whatever.”

“It’s happening slowly,” Mullenix said. “Places that were medium-sized like COOP [Ale Works] are now getting grocery distribution deals and see them highlighted on the shelves instead of Bud Light.”

At Social Capital, large digital screens display the day’s beer selection complete with its origin and alcohol by volume to allow customers to choose from such a wide selection. The focus is on the beer and conversation. There are no large television screens, except for big sporting events, and Social Capital doesn’t offer complimentary Wi-Fi access because they want people off their phones and meeting people.

Its non-beer alcoholic offerings extend to five white wines, three red wines and a collection of house cocktails that focus on gin. It also offers standard cocktails like margarita, Manhattan and Moscow Mule, plus drinks made by customer request.

“All of us owners really like gin,” Mullenix said. “We drink beer 95 percent of the time, and it seems like if it’s not bourbon or beer, it’s a gin and tonic. There’s not anyone doing it, and it’s a chance to be different. 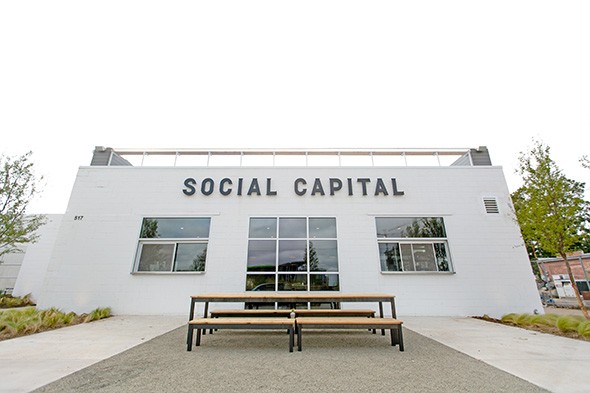 The food menu is the product of A Good Egg Dining Group alum Grant Clements, who joined Social Capital after working at The Drake Seafood & Oysterette. There are two registers and kitchen sections separated into hot and cold offerings, but any of the menu items can be ordered at either register.

“We’ll eventually get to 10-12,” Mullenix said. “We’re trying to have the most extensive salad menu in the city, and we want a lot of variety for vegan, vegetarian crowd, and they all have protein options.”

There is a Spanish-style charcuterie board along with cheese from Lovera’s in Krebs. The kitchen is making chocolate, vanilla, blueberry acai and a seasonal ice cream in addition to a pair of beer ice creams: Stout Ice Cream, made with Prairie Artisan Ales’ Chocolate Bomb! and Everything Rhymes With Orange IPA from Roughtail Brewing Company.

“I had to remind everyone to I.D. for those two flavors,” Mullenix said.

Beer is involved on the hot side of the menu, too. Pulled beer-can chicken is showcased on a taco while beer cheese is highlighted on the nachos and Nashville hot fried cauliflower. There are three additional varieties of taco: double caramelized carne asada, roasted al pastor that cooks on a spit for everyone to see, and seared cotjia cheese.

Clements is excited for the opportunity to run the kitchen. Mullenix said he has free range to change the options as he sees fit.

“It’s a great group of people, and I like the challenge of a large restaurant with nice, high-end food,” Clements said. “It’s why we went with a small menu so that we can execute, and once we get the flow, we can build from there. A larger menu will come.”