pass through the doors at the massive Hobby Lobby distribution complex in southwest Oklahoma City and scan the code on their badges, clocking in for work.
The sun is yet to rise, but it’s a warm and humid July morning. And inside, the un-air-conditioned warehouses are already steamy.

As the legions file in at 5 a.m., they learn how long they’ll be expected to stay, driven by the total number of orders their group must fill. On this Thursday, when outside temperatures are set to eclipse 100 humid degrees Fahrenheit, workers in sprawling Building 2 are informed they will be working around 10 hours, which means quitting time will come at 3:30 p.m. rather than the standard 1:30 p.m.

The next day is a Friday, customarily one of the busiest days of the week; employees will be back at 5 a.m. with the strong likelihood of a 10- to 12-hour shift on another day over 100 degrees.

Because not everyone returned after a monthlong forced furlough and many others have taken jobs at the Amazon Fulfillment Center near the airport, there are scores of open jobs. The result is the current workforce is left to handle the multitude of orders from stores experiencing high demand from Americans with copious free time forced upon them by the COVID-19 virus.

As the Hobby Lobby campus is approached by car, the full scale is difficult to register.
The dozen warehouse buildings are low to the ground and seem to stretch out forever, so large and spread out the only way to have more than two in your field of view is via a helicopter or airplane. But with each being set back from the main roads with multiple entrances and signs, the impression is not particularly overwhelming.

Yet Building 2 — the company’s first mega-warehouse — is almost 2 million square feet alone, the equivalent of 35 football fields under one massive U-shaped roof. Employees park in the center, and hundreds of trucks dock all along the outside perimeter, some dropping off big product shipments in bulk, others dispatched with orders destined for one of 900 stores as far away as Washington, Maine and Florida.

In all, the company has more than 10 million square feet of space on nearly 1,000 acres between Will Rogers World Airport and the fast-growing bedroom communities of Mustang and Yukon.

Every single item sold by Hobby Lobby and sister company Mardel come into and then out of these warehouses, most of it imported from China. Even as the company continues its aggressive nationwide expansion, there are no plans for regional distribution centers.

The complex is one that many will never see and configured in such a way that few will recognize Hobby Lobby as the largest private employer in Central Oklahoma. Most are surprised to learn the company employs almost four times the number as does Devon Energy in its landmark 50-story downtown skyscraper 10 miles to the east.

In 2018 alone, the company generated over $5 billion in revenue.

Carla (name changed to protect her identity) has been working in Building 2 for several years but increasingly dreads her job.

Although Hobby Lobby provides masks and gloves at the entrances, few wear either. We spoke with a dozen Hobby Lobby warehouse workers who all reported that only 10-20 percent of the thousands of employees wear masks.

Carla worries about catching COVID-19 but is sympathetic toward her coworkers.

“It can get incredibly hot in there, and most people are working very hard,” she said. “The tasks require walking several miles every day and lifting heavy boxes. We have production quotas, so we have to work fast. The masks make you sweat, and it’s not as easy to breathe.”

Like the majority of those in the warehouses, Carla is a “puller” receiving orders from stores and briskly walking long distances with her cart to retrieve the necessary items before placing the boxes on the massive conveyor system for shipment. It’s hard, frantic work, especially in the excessive heat of the summer months. Carla carries her own bandages and antibiotic ointment due to frequent injuries from box cutters and paper cuts.

Pullers are a very diverse lot. Many are younger people not far removed from high school, but a good percentage are over 40 as well. There are slightly more women than men, all of varying races, colors and creeds.

Amid this mix of thousands of people working relatively close together in enclosed spaces, Hobby Lobby does not perform body temperature checks upon entry, although the company does employ workers dedicated to sanitizing surfaces throughout the day.

Starting at 5 a.m. means the 30-minute lunch interval comes at 9:30 a.m. with a few 15-minute breaks scattered throughout the day. Workers congregate in one of the many air-conditioned break rooms or sit outside to get fresh air. Many use this time to check their mobile phones, which are prohibited in the warehouses.

Carla and most others have been hearing rumblings about several positive cases of COVID-19 in her own building. Workers from her zone have been transferred to others to cover for sick employees and then return to work alongside her.

We spoke to Jennifer (not her real name), who recently came down with the virus and is certain she picked it up at work.

“I only go to work and home,” she said. “There is really no other place I could get it.”

After a week of not feeling well, Jennifer finally went to be tested and received a positive result. She informed her manager, who immediately mandated a 14-day quarantine without pay. Any existing vacation pay would be applied instead.

Jennifer later learned that there was no announcement within her work group about a positive case, although word of mouth flows freely on the warehouse floor. Fear runs rampant, but the people working there need every full paycheck.

Unlike typical corporate settings, the warehouse workers are not connected to a companywide email system. In many ways, Hobby Lobby is old-school; it famously eschews bar codes for inventory control, relying instead on physical counts.

Instructions come one-on-one or through occasional meetings in which large groups are gathered into a break room. Because of what many describe as a large communication void, there is a lot of gossip and speculation about what is happening around the campus, and many don’t believe they are getting the complete story from the company. Most of those interviewed expressed concern about losing their jobs if they were to talk openly about the perceived problems.

Carla casually mentioned that one of her primary concerns is that coworkers aren’t getting tested and in the case of a positive result, might not tell managers, fearing a forced, unpaid 14-day quarantine.

With the aid of millions in taxpayer subsidies, in August of last year, online mega-retailer Amazon opened a 2.5 million square foot fulfillment center near Will Rogers World Airport.

Although Amazon uses a regional distribution model, its facility is very similar to those at Hobby Lobby with some key differences: 1) it is air-conditioned; 2) it utilizes thousands of robots to retrieve storage racks, thus greatly reducing many miles of walking for employees; and 3) it now offer two weeks’ paid sick leave.

While pay and benefits are similar, the first two points led hundreds of Hobby Lobby warehouse workers to move to Amazon. And although the Seattle-based company has received criticism of its own for employee working conditions, the paid sick leave is another big point of differentiation.

Both companies are seeing big surges in the volumes processed through their warehouses as the result of COVID-19. 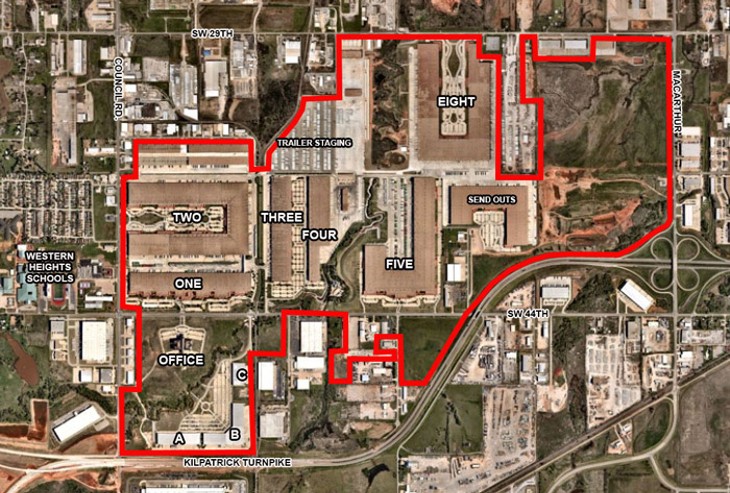 Hobby Lobby is privately owned solely by the Greens, a devoutly religious family. Those views are the primary driver behind Hobby Lobby; the Greens use the proceeds to further the word of God and invest in causes toward that same end.

$70 million of the family’s fortune was donated to Oral Roberts University to rescue the university, and Mart Green, David’s son, became chairman of the university’s board of trustees.

The family also bought the campus of defunct St. Gregory’s University in Shawnee for $8 million and then donated it to nearby Oklahoma Baptist University.

Large donations have also been made to National Christian Foundation, which has been criticized for funneling millions to anti-LGBTQ groups.

The “About Us” section of the Hobby Lobby website states the following:

We are committed to:
All Hobby Lobby facilities and stores are closed on Sundays.

Over the last several years, Hobby Lobby has been the subject of a good deal of controversy.

In 2012, citing religious beliefs, CEO David Green publically denounced the Patient Protection and Affordable Care Act, specifically the provision that companies provide access to contraception and the morning-after pill. Ultimately, the case went all the way to the U.S. Supreme Court, which narrowly ruled in the company’s favor.

In the early 2000s and toward the establishment of a Museum of the Bible in Washington, D.C., Hobby Lobby began purchasing artifacts from Iraq and other countries in Middle East. In 2009, the company was warned that some of the items had likely been illegally looted. Ultimately, American courts required the return of many items and ordered a fine of $3 million. In April of this year, fragments of the Dead Sea Scrolls, which have been the centerpiece of the museum, were determined to be fakes. There have been several other successful legal actions brought against the company, resulting in the forfeiture of other artifacts.

More recently, it made the news for refusing to close stores even in areas in which it was legally required to do so, which resulted in citations in Denver and Dallas before being forced to shut down. Amid this controversy, owner David Green shared a letter with employees that spoke of his wife Barbara’s revelation.

“In her quiet prayer time this past week, the Lord put on Barbara’s heart three profound words to remind us that He’s in control. Guide, Guard, and Groom,” Green reportedly said in the letter. “We serve a God who will Guide us through this storm, who will Guard us as we travel to places never seen before, and who, as a result of this experience, will Groom us to be better than we could have ever thought possible before now.”

Many employees felt this view indicated why the company was not taking a more proactive role in protecting them during a pandemic.

Warehouses also were kept in operation until March 26th before reopening along with Hobby Lobby’s stores in the first two weeks of May.

Hobby Lobby did not respond to Oklahoma Gazette’s request for comment.