Many of Oklahoma City’s urban neighborhoods have stepped up their efforts in recent years when it comes to biking and pedestrian infrastructure.

However, moving from one community to the next by bike or foot remains challenging, especially when having to cross Classen Boulevard.

“How do we start rethinking Classen?” said Jon Dodson, who lives near Classen and helped establish Alliance for a Better Classen Boulevard. “Right now it divides the city. It divides Gatewood and Ten Penn and the Plaza [District] form Midtown, Heritage and Mesta [Park]. So we started thinking, ‘How do we do this in a low-impact way?’ and then, ‘How do we dream big?’”

Classen, which was once a major streetcar line, serves as an urban highway, snaking six lanes of traffic from west of downtown north through some of the city’s largest inner city residential neighborhoods. From 16th to 23rd streets, Classen is especially treacherous to cross, as a lack of sidewalks, short crossing times and messy intersections make it challenging, if not dangerous, for bikers and pedestrians.

“I cross [Classen] every day, so I’m very knowledgeable of the flaws in it,” said Dodson, who last week hosted a group of citizens and urban planners on a walking tour of a portion of Classen to dream up ways to improve the road.

This type of re-imaging of an urban corridor has been done before as the Institute for Quality Communities (IQC) has helped develop a streetscape plan for Western Avenue, a parking plan for the Plaza District and a streets plan for the 23rd Street commercial district.

“We want to see if there is way a to make it safer for people to cross [Classen],” said Shane Hampton, a fellow at IQC. “There are only a few safe crossings for people biking or walking.”

Any plans developed by IQC will be shared with the city, and the hope for Dodson and his group is that Classen improvements will be incorporated into any future plans or potentially a future bond issue.

“I think there is a lot of interest from everyone to see this happen,” Hampton said.

Dodson said he has alreadyhad conversations with Ward 6 Councilwoman Meg Salyer about the city funding a study of Classen and potentially developing a plan.

“Right now, we are waiting to hear about what the outcome is going to be,” said Kim Cooper-Hart with the city’s planning department. “We need to know how we know we are done with our research. That piece right there is what is helpful to all of us, and I know that is just right around the corner.”

Connecting neighborhoods separated by Classen is not just a quality-of-life issue but could boost economic development, said Kristen Vails, director of the Plaza District, which is six blocks west of Classen Boulevard on 16th Street.

“We would love to be a part of the [city’s] bike share program and be a part of any future transit that a happens here,” Vails said. “This intersection is really important in connecting the [Plaza] District with the downtown and Midtown areas.”

After last week’s walking tour, the group shared initial impressions, which included an unsafe feeling walking on a sidewalk so close to a busy street, the lack of time given to cross at a crosswalk and the speed of traffic.

Short-term solutions could involve streetscaping, sidewalk construction and pedestrian infrastructure at intersections. However, Classen has also been identified by the Association of Central Oklahoma Governments (ACOG) as a potential route for a streetcar line. In its regional transit plan, the new downtown streetcar line could be extended up Classen, which would make issues of bikeability and walkability even more important.

Dodson said the walking tour was an initial step that he hopes to follow with discussions with area neighborhood associations, businesses and other interested parties.

“We didn’t really feel like we could open up to public dialogue without first coming out here and walking it,” Dodson said. “We really want public engagement because we really feel like if we can get families on both sides of Classen to say, ‘This is a project that we can utilize,’ it will help boost this project.”

Dodson said he has been encouraged by conversations with city officials and believes improvements are a real possibility, especially with the city looking for ways to improve neighborhood connectivity.

“[The city] believes we can find a way to make this work,” Dodson said. “This is the absolute right time to do this.” 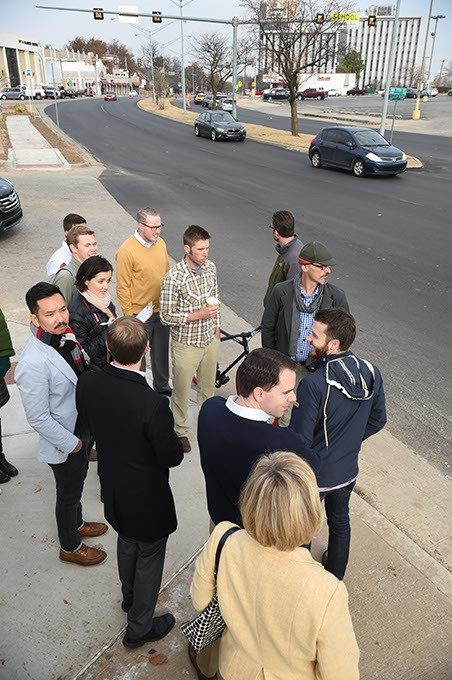