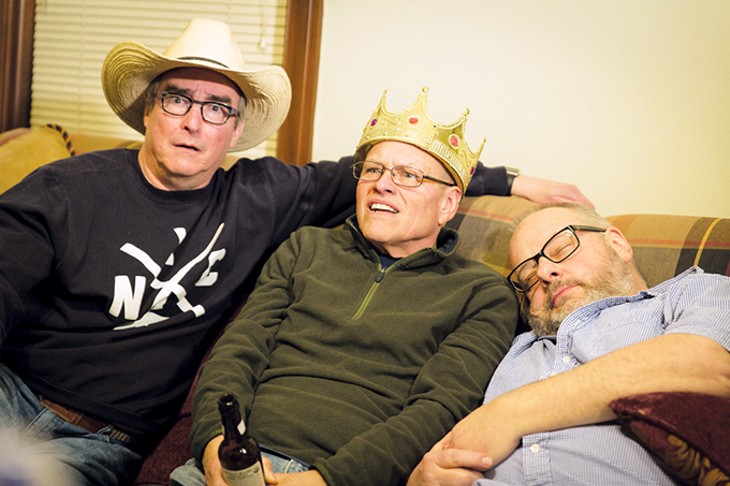 It’s 1 a.m. on a Tuesday morning. You’re in Taos, New Mexico. Ethereal music drifts from the radio speakers until an electronically altered bass voice says this:

“Did you hear that change in tempo? You must’ve heard it. It slid right in there. What’s going on around here? You probably fell asleep with your radio on again, and now there’s no controlling what’ll happen. Now just relax. You might have an alligator climbing right up inside your mind. Or you might just have tuned in to The Alligator Farm radio show.”

Alligator Farm proprietors Davy Wells, Mike Waugh, Pete Young and Darren Dunn are all from Oklahoma City, but until they began posting old episodes on their Facebook page recently, the only way to visit the farm was to tune in live at 1 a.m. Tuesdays, Mountain Standard Time, to KNCE 93.5 FM “True Taos Radio.”

“It’s a really great group of people that are up at that hour in Taos,” Young said.

Wells contradicted Waugh’s figures, calling Alligator Farm the “No. 1-rated radio show of all time, worldwide,” then adding, “in our minds.”

“I think you have to have some experience with psychedelics and computer programming to really be a fan,” Dunn said.

The show began two years ago when an old mutual friend and bandmate began working at KNCE, which had recently begun broadcasting.

Wells, Waugh and Dunn became friends while attending Putnam City High School in the late 1970s. Interested in theater and inspired by Monty Python, George Carlin and Firesign Theatre, they began recording comedy tapes together, which Wells said were “strictly for [their] own amusement.” Waugh and Wells studied the improv comedy methods of Del Close and started the troupe Baloney Rodeo, which performed locally for 20 years and still reunites sporadically. Dunn, Waugh and Wells began making videos in the 1990s, and Dunn wrote and directed the short film Birdhead, which debuted at deadCenter in 2012 and featured Wells and Waugh in memorable roles. Young, who graduated from Midwest City High School in 1992, met the rest of the Farm crew through the local theater scene in the late 1990s.

With more than 150 episodes released, The Alligator Farm is prerecorded at Waugh’s house and extensively edited together by Dunn, who takes cues from culture jammers Negativland. It was originally broadcast early on Fridays before a listener complaint prompted the move to Tuesdays.

“There’s nothing offensive about the show,” Young said. “We just take care of alligators.”

The listener might have meant The Alligator Farm offended their sense of normalcy.

“A lot of people get confused by our show,” Wells said.

The currently show has no sponsors.

Surreal, improvised sketches pop in unexpectedly between lengthy musical interludes featuring artists ranging from Throbbing Gristle to Big Freedia. Wells, Waugh, Young, Dunn and a variety of guests including Rebecca McCauley (who voices a human-alligator hybrid), Lance Farley (sent to the farm by a temp agency), Beth Swales, Doug Brown and many others from OKC and beyond explore metaphysics, religion and ideas that defy summarization.

“We’re sitting there with the microphones on, the tape rolling, and Darren’s got the headphones on,” Wells said. “Mike and I will start talking, he’ll interject, Pete will come in, and pretty soon, we’ve just gone off into some place that we’ve never expected to, and the truth is, an hour after we’ve done it, I couldn’t tell you what we’ve done.”

“But we know it must be important,” Waugh added.

Though many are schooled in theater and improv, the show’s guest stars sometimes have a difficult time becoming acclimated to its format.

“It’s kind of hard to get used to,” Waugh said, “because it’s all about give-and-take, and if you feel like it’s going in a direction, you need to get onboard and go with it. There are some people that are better at that than others.”

“It’s kind of that improv idea that it is usually a ‘yes, and,’” Wells said. “You usually don’t block what the other person is saying. No matter how outrageous it is, you go with it. You go, ‘Of course you’ve got three arms,’ and all of a sudden you start talking about how they look with three arms and you add to it. Pretty soon, it becomes bizarre, but we’ve done it long enough that we kind of have a sense of when to reel it in.”

“We used to have this janitor at our high school named Floyd, and he was in charge of picking up the cigarette butts in the parking lot,” Dunn said. “Every time you’d walk by, he’d go, ‘Get some laughs out, boys.’ And it really is that. If I can sit and laugh uncontrollably once a week or whatever, I feel a whole lot better for the next few days. I don’t get to laugh as much as I used to, for some reason.”

When alligators actually are involved, they’re being read bedtime stories, led in prayer or listening to self-help audiotapes.

“Remember, humans don’t hate you,” a soothing voice reassures an alligator through its headphones. “They hate each other. … Relax in knowing that just because they’ve evolved from one species to another with such mind-blowing effectiveness to where they now rule over you doesn’t mean they’re better than you. Relax in knowing that you can kill them and there’s not an alligator in the world that’s on death row.”

The Alligator Farm only has 11 rules.

“Seven and four are the same, I think,” Dunn said, “and one of them is unwritten, so we don’t really know what that is. ‘Keep your arms and hands inside the car at all times,’ is one of them. I’ve forgotten most of them. ‘Don’t ever cut a part off an alligator,’ was one of them.”

No one remembers how the idea to set the show on an alligator farm came about, only that they knew they needed to set it somewhere.

“The weird part is just north of Taos, there’s a real alligator farm in Alamosa, Colorado, so people often confuse us for those guys,” Dunn said. “I don’t know what they think, but occasionally we’ll get a question about, ‘Why do you keep alligators in the mountains?’ … But there’s going to be a lot of jealousy and bitterness when we do meet them because we’ve got a radio show and they’ve just got alligators.”