A new fitness club in Norman aims to help patrons get healthy. 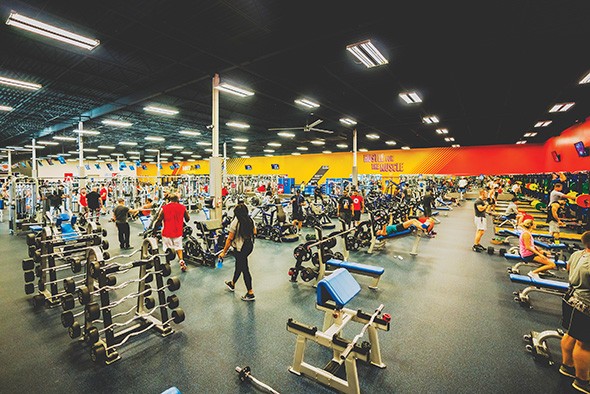 The owner of a new fitness center in Norman, the latest expansion in a growing nationwide chain, said it’s a great time to look at getting back in shape, no matter where you are today.

“My dad used to always tell me, ‘How do you eat an elephant? Well, you do it one bite at a time,’” said John Armatas, one of the owners of Crunch Norman. “What people have to do is make a conscious decision that they want to improve their life on the physical side, on the health side.”

From there, it’s a one step at a time, day by day process, Armatas said, that could start by walking in the doors of the new fitness center.

And whether you are a fitness newbie or a top-level athlete, the club wants to welcome you with open arms.

In the case of assistant general manager Joshua Guerrero, a former Marine who has been both a competitive bodybuilder and powerlifter, the arms are probably pretty well-toned.

“We like to create a culture of fitness here,” Guerrero said.

“We’re very no-judgment,” Guerrero said. “We like to create a facility where anyone can reach their fitness goals.”

Those goals are measured in a variety of ways, including a 3-D body scan. At times, weight loss will stall as muscle is being added, and Guerrero said the metrics at Crunch Norman allow people to see beyond the scale and not get discouraged if that number isn’t always moving down.

But it’s not just about being fit; it’s also about having fun. Armatas told Oklahoma Gazette that a culture of friendliness, enjoyment and fun will help get people in the doors to work on their own personal fitness goals.

“Our team members, they get it; they are all there for the same reason,” Armatas said. “It’s an important piece of what we do. Take the economics out of it — this is really about impacting people.”

Norman was specifically selected for multiple reasons, including the location of University of Oklahoma and the town’s interest in fitness as a category.

“We want to make sure the community in general has an interest in fitness, which we believe in a town like Norman, just driving around, seeing people outside running, doing outside recreation, that kind of community is the place we want to be,” Armatas said. “So Norman was specifically selected. Some of our other locations are in similar type towns, like Athens, Georgia, where the University of Georgia is, or Lubbock, Texas.”

Armatas said each city they’ve opened a Crunch location in has been heavily researched.

“Before we go into a city, we spend 90 to 120 days sort of on the ground, driving it, looking at where the traffic patterns are, seeing the community in general, the activities; spend time looking at the local newspapers, watching the local businesses,” Armatas said. “We want a community where we will get a strong sense of community, as that’s what Crunch stands for — it’s a no-judgment philosophy, so we want to be open to everybody.”

That philosophy was echoed frequently by both Armatas and Guerrero.

“We really do believe it and live it,” Armatas said. “We recognize that less than 15 percent of the population exercises on a regular basis. We recognize the escalating cost of health care. It is important for people to find an environment that they like going to so that they will go.”

He said making the trip to the gym fun and social will lead to better health outcomes. And whether that’s making time for a short workout or following a more intense regimen, Armatas said Crunch staffers want to meet you where you’re at and make you feel welcome.

“Take out the fact that you gotta strap on your shoes and get in the car and go.  If you’re not having a good time while doing it, not meeting people or having fun engaging with staff or other members, you’re probably not going to go,” Armatas said. “You’re probably going to drop out. And we really, really do want people to stay with us. Because we know that it impacts them. And we’ve seen it.”

To make things easier on parents, a babysitting service is offered inside the gym for children age 6 months to 12 years. That’s one of many services that can be part of your membership at Crunch, but there are also multiple levels so members don’t pay for services or amenities they don’t need or won’t use.

Crunch offers proprietary classes in several 30-minute formats, including HIITZone, a high-intensity interval group training program. With a very open layout to the gym, those working out will see many of the other classes and offerings that are available, possibly demystifying the process.

“When you get a couple thousand people working out in a day, people are talking about it,” Armatas said. “It becomes part of their life; it becomes part of what they do every single day. Some people pay for a gym membership and they have it with the hope that they’ll go one day. Well, we think one day is today. And if you don’t start, you’re never going to realize who you are and what you can actually do in the fitness environment.”