A local artist brings her creativity to city hall as its first artist-in-residence. 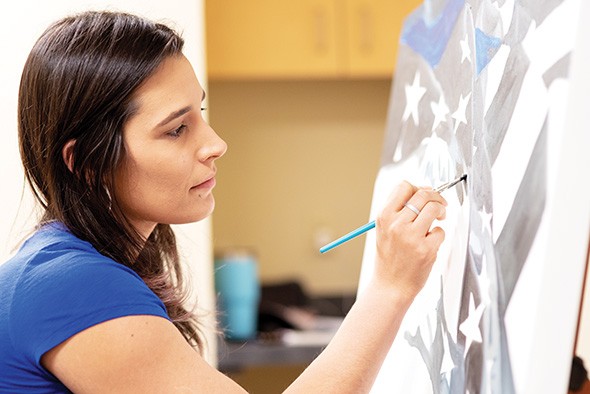 Erica Bonavida brings color and texture to Oklahoma City Hall. The artist was hired in February to serve as City Hall’s first artist-in-residence.

Bonavida finds art fulfilling, but there was a time when she avoided the subject altogether. An admitted perfectionist, she said she struggled when she was younger to understand why she would create art while knowing it would never be “perfect.”

“I was adamantly against art; like, I’d avoid art, really,” she said. “In high school, they required two classes. I tried to get out of the credits, but that didn’t really work out for me.”

So she took an introduction to art course and a class on painting, which is where she began to appreciate art.

“I was awful; everything was terrible, but it was really fun,” Bonavida said. “I just really enjoyed playing around with the paint and just the feel of it, and so I tried to develop the skill a little bit more.”

She attended University of Central Oklahoma with the intention of getting a business degree, but that did not happen. Instead, Bonavida switched to an art major and has not stopped pursuing the craft since.

“It was a really scary choice to choose art because it’s not a certain field, and it is really hard to make your way in something like that,” she said. “But I just decided [a business degree] wasn’t going to make me happy.”

Bonavida is a realism painter whose work focuses on a variety of textures and fabric. She said her love of fabrics was born out of a still-life project she did in college. Tasked with painting a statue, fruit and a piece of fabric, Bonavida found herself immersed in how fabric lies.

“I really enjoy trying to capture the creases and the way the fabric moved, so I spent way too much time on that and then I neglected the statue. Later in the semester, they had an assignment where you had to paint a still life, but of something you were obsessed with,” she said. “I thought back to that first project and how I could not stop working on that fabric. … I ended up painting a still life of fabric that was all sort of a French royalty-inspired theme.”

Her body of work grew from there, and when it came time for her senior art show, Bonavida said her work was basically all fabric-based still lifes.

“It never stops because there’s an unlimited amount of textures that you can paint, and you’re constantly trying to figure out how do you make it look like the fabric itself is lifted up and moving, but how do you also capture the texture and even the weave of stuff,” she said. “It’s also developed a lot more. From those first projects, it was subconscious. … And now, whenever I paint something, I try to convey a little bit of a narrative in it so that there’s some sort of backstory or there’s some significance to choosing those particular fabrics and pieces.”

Now working at least 12 hours a week from City Hall, Bonavida gets a $750 monthly stipend to create art projects, display her pieces for sale and collaborate with downtown officials to market and promote events.

Bonavida has been on the job for about two months and said interacting with city employees and residents has been a great experience and a welcome departure from her private home studio.

“It just feels amazing that the city itself is recognizing that the arts are important and that they’re wanting to bring that into the public domain a little bit more in a way that you can interact,” she said. “For me, getting to interact with the public in that way is completely different than any kind of experience I’ve had before.”

Robbie Kienzle, City of OKC’s arts and cultural affairs liaison, said some city leaders requested looking into an artist-in-residence program for the city, and Bonavida was the perfect candidate.

“She is great; we got super lucky for our first artist-in-residence being such an amazing person,” Kienzle said. “She’s great with people. She loves to get interrupted. She’s just perfect.” 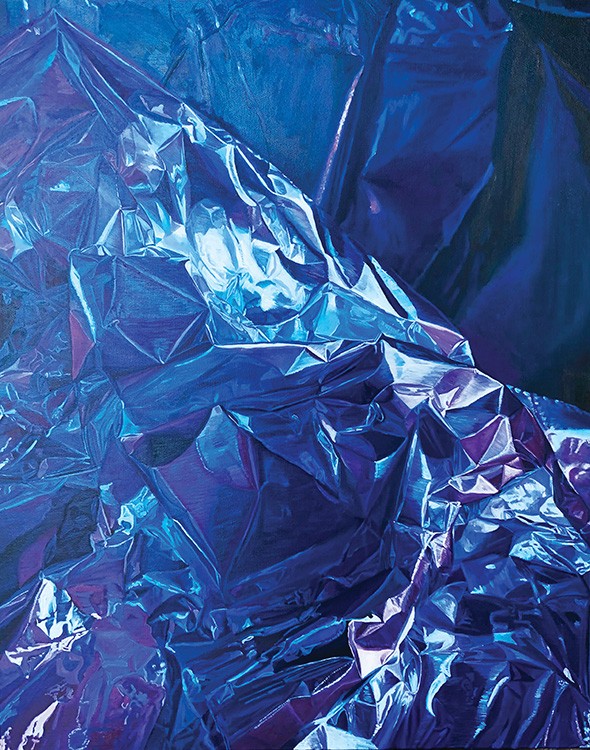 “She has a great willingness to utilize that studio space, a lot more than even our minimum requirement was,” Kienzle said. “The other thing is it seemed like a great way to kind of launch her career beyond what she’s currently doing. Like the coaching that our staff is doing with her. We’re already working with her on our first public art project.”

Kienzle said Bonavida is the type of artist to thrive on contact with people, which made her a perfect fit and served as a great way to help expand her audience. Since City Hall’s walls are marble, they are currently in the process of buying a system to hang her work.

“You could tell by her interview that she was a real people person and would be a great ambassador for the city,” Kienzle said. “There was something she did during the interview that was just really amazing; she brought a piece of work and talked about it. She talked about her philosophy behind the work, and it was almost like, by the word choices she would use, she would almost help you just kind of feel the texture of the painting.”

Bonavida said she hopes the opportunity can push her career forward and allow her to be a self-sustaining artist.

“I’m hoping that between the exposure and all the mentorship, that I’m able to come out of this as somebody who can continue to function throughout my career with a lot of new skills that are going to help me stand on my own two feet,” she said.

Bonavida’s contract is active through December, but if the Office of Arts and Cultural Affairs receives a Mid-America Arts Alliance grant in June, the contract will be extended until June 2020. Kienzle said the city is measuring the success of the program to see if it will propose it again in the same way next year or make changes.

Bonavida’s City Hall studio is on the first floor. She typically works 10 a.m.-3 p.m. Mondays and Tuesdays, and she encourages public visits.