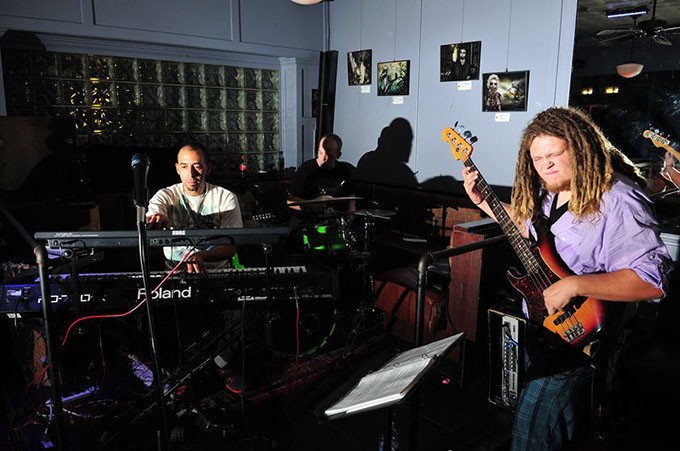 Culture Cinematic, a genre-bending collective based out of Oklahoma City, showcases diverse sounds and talents, the combination of which helps separate this developing outfit from the pack.

The group, consisting of T.J. Haverkamp on keys and synthesizers, Eric Harris on bass, Jonathon Thomas on drums and Lacy Saunders and Jade Castle on vocals, got its start a few years ago when Haverkamp and Harris first met. The group has seen different personnel since its birth, but the current lineup has been intact for nearly a year.

“This January is when we started writing all our new material together, and it really all came together,” Harris said. “We kind of decided what the direction was that we wanted to take.”

The group’s members don’t like to classify themselves into a single genre, and they feel capable of playing many types of music. But listeners can hear a blend of many musical elements, including soul, hip hop, jazz, electronica and R&B.

“I tell people ‘ultra’ when they ask us what genre [Culture Cinematic is],” Haverkamp said. “Because that’s the goal: to create something new but also familiar at the same time.”

The group’s influences — which include Outkast, John Coltrane and Charles Mingus — are not surprising given the diverse sounds featured in its music.

Each member of the group brings something important to the table, and everyone contributes to the creative process. They have different schedules, but they still try to meet at least once a week and they are constantly finding ways to collaborate, even if they can’t all meet in person.

Typically, any new music begins with one person. But as the process continues, everyone does his or her part.

The collective has performed in a number of diverse venues, and they occasionally play without the full lineup, but they welcome the challenges these differing situations provide.

“The way that we’ve all developed a relationship with music has led us down a path of being able to be A) multi-faceted and B) capable in different situations,” Harris said.

Harris and Haverkamp described their shows as lively, noting that they love to get the crowd involved.

“It’s not really something where people just stand back and are quiet and just watch us,” Haverkamp said. “It’s more like we’re trying to feed off of everybody and have them feed off of us too.”

The group’s first EP, Medusa/Madonna/Mona Lisa, is nearly ready to drop, and they have plans to complete a full-length LP within the next eight months or so.

Beyond the album, their plans include further developing their brand and expanding to regional and national touring. They described their current fan base as a sort of cult following, and they intend to add to that in the near future.

“We want to be the people’s champ,” Haverkamp said. “We’ve got a little something for everybody.”