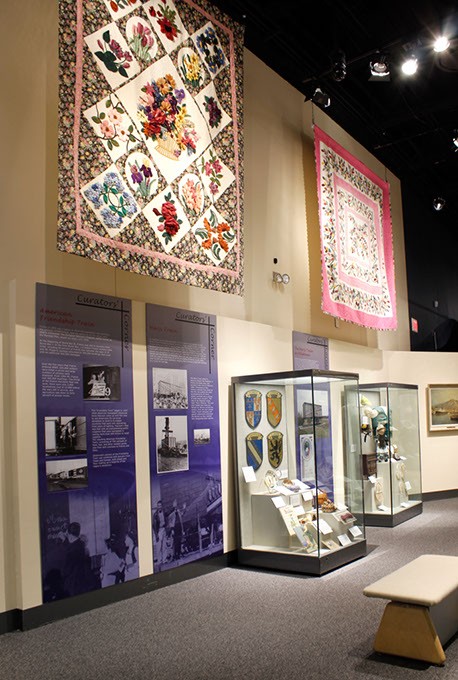 Oklahoma History Center receives dozens of donations in any six-month period. These artifacts donated by people from all over Oklahoma tell the stories of the lives of their parents, grandparents and beyond. No matter how compelling the story, the museum doesn’t always have a place for them in its established collections. That’s why museum staff decided to establish Curators’ Corner, a new exhibit that allows them to showcase objects that might otherwise not have a home.

“Ninety-nine percent of our collection is stored away behind the scenes in the collections area, so it’s always difficult to choose which artifact goes along with the story that we’re trying to tell,” said Amy Hildebrand, curator of collections at the Oklahoma Historical Society.

Many of these donations spend the rest of their lives stored away from view, either because they’re not in optimal condition or because they don’t fit in with any of the other exhibits, which are typically up for between two and five years. It can be a challenge to pick and choose what to display, but Curators’ Corner gives museum staff a flexible space they can experiment with if there’s something particularly compelling they want to showcase or if they want to address something timely.

“There’s just some really interesting lives and stories from individuals that represent the story of a lot of other people,” Hildebrand said.

Even though some of the items appear to be simple, everyday objects, they help tell the story of Oklahoma and its people, as is the case with several quilts on display made by one woman over the years.

“Her whole life, essentially, was hard work on a tenant farm, but she managed to create these beautiful works of art for years and years just by using what little time she had in the evenings and what fabric she could afford to buy or pieces of clothing that were worn out,” Hildebrand said.

Among the items currently on display are military memorabilia and Caddo women’s dance regalia. Also included are items from the Merci Train, an offering of friendship between the United States and France after World War II. In 1947, Americans sent what was called the Friendship Train, which included trainloads of fuel, food, clothing and other essential items, to France and other European countries struggling after the devastation of the war. In response, France sent the U.S. the Merci Train, which included 49 train cars of items as diverse as pottery, fruit trees and wedding dresses. The exhibit also includes “Trail of Tears” by painter Elizabeth Janes, a 1939 mural that was recently conserved at the history center. It was made as part of Janes’ work for her master of arts degree from the University of Oklahoma.

The exhibit also gives visitors a peek behind the scenes at what museum curators and conservators do. While people might think this primarily involves arranging objects, Hildebrand said they also answer questions from the public and catalog the many artifacts stored at the museum. The exhibit includes a section introducing people to the field of artifact conservation, something that Hildebrand described as revolving around the idea “First, do no harm.”

“Everything they do should prolong the life of the artifact without changing the original intent or work of the original painter,” Hildebrand said. “Things they do are generally reversible and not a permanent change, and the intent is not to bring it back to its original form, but rather to help that piece exist into the future.”

When choosing artifacts for Curators’ Corner, museum staff looks for items that not only have interesting and visually compelling stories to tell, but are also in good enough condition to be on display for six months or more.

Items in Curators’ Corner will be rotated approximately every six months. The exhibit is located in the Noble Foundation Gallery on the third floor of the Oklahoma History Center, 800 Nazih Zuhdi Drive.