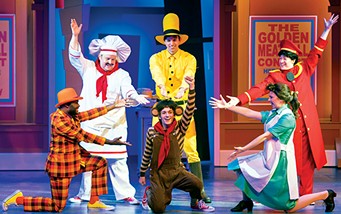 Young theatergoers will soon be able to enjoy the hijinks of a famous monkey and his human companion with the yellow hat when Lyric Theatre of Oklahoma, 1727 NW 16th St., stages Curious George and the Golden Meatball starting this month.

George’s onstage adventure begins on All-You-Can-Eat Meatball Day. George and his friend, Chef Pisghetti, cook for the crowd but are outdone when Phinneas T. Lightspeed starts up his Meatball O’Matic 9000. Discouraged, Chef Pisghetti decides to give up cooking, but George still wants to enter his recipe in the Golden Meatball contest in Rome. The characters’ journey teaches kids about friendship, determination and more.

The Golden Meatball comes to Lyric Theatre as part of the Theatre for Young Audiences (TYA) initiative, which aims to produce shows for children and their families. The target audience for this production is preschoolers to second-graders, although all ages are welcome.

The show’s director, Matthew Sipress, said the theater has made a commitment to have at least one TYA production every year, and this is its third. 2017’s show was James and the Giant Peach, and 2018’s was Junie B. Jones: The Musical.

One of Lyric’s actors, Justin Larman, has participated in all three TYA productions so far. In The Golden Meatball, Larman is playing Chef Pisghetti, along with a couple of secondary parts. (Lyric’s TYA productions often utilize smaller casts, with actors filling multiple roles.)

Larman said he auditioned for shows throughout his time at University of Central Oklahoma. Since getting cast for the first time in 2017, he has performed in five productions with Lyric. He is coming to The Golden Meatball after performing in a Colorado production of Elf.

His own childhood involvement with live theater inspired his educational and career path.

“I remember there was a production of The Wizard of Oz at Jewel Box, in their outdoor theater,” he said. “And I think that we went four times to see that show.”

This memory is likely of Jewel Box Theatre’s 1994 production. Some time afterward, while looking at pictures of his younger self with the Wizard of Oz cast members, Larman realized that one photograph featured a performer who would later become a close friend.

“It’s just so crazy how much live theater can impact kids,” he said.

At Lyric, Larman is also in charge of leading the question and answer sessions after every TYA performance, which allows kids to ask questions about the actors and the production. He said he thinks engagement with the young audiences helps them retain the show’s lessons more firmly. He also loves to see their excitement at getting to interact with actors and said it is one of his favorite aspects of performing.

“Who knows; maybe we’re inspiring them to maybe want to get into theater,” he said. “The Q&A is the educational aspect of it, where they get to learn about live theater and what we do as a job, what we all put into it. I think it’s super important.”

Larman pointed out that books have inspired all the previous TYA productions, which is another element that can benefit young theatergoers. Curious George originally appeared in children’s books by Margret and H. A. Rey.

Larman said Curious George teaches readers about optimism, friendship and a world where anything is possible.

“A kid getting to read a book, and then [getting] to see those characters live onstage, is, I think, super fun,” Larman said.

Larman is looking forward to working at Lyric again, but the most important thing to him is entertaining the young audience members.

“I always joke around that actors are like Tinker Bell and we need applause to live,” Larman said. “Hearing the laughter of kids is just such a rewarding thing. It makes you feel like we’re doing a good job here. These kids are getting to see real people up on stage performing and singing live.”

The cast also includes Gavin Guthrie as Curious George, Greg Gore as The Man With the Yellow Hat, Jenna Mazzoccoli as Netti, Bailey Maxwell as the Doorman and Elvie Ellis as Phinneas.

Sipress also brings experience to his role as director. He has been with Lyric Theatre for 12 years and serves as company manager. He stressed the importance of the Theatre for Young Audiences program as well.

“Truly, they’re our next audience,” Sipress said. “If we can grab them now, let’s work their theater knowledge and get them coming early and learning how to not just [see] shows, but learning how to be in a theater.”

Lyric Theatre strives to be accessible and offers shows to children who might have sensory sensitivities or need American Sign Language (ASL) translation. Sipress said the sensory-friendly performances are exactly the same content, but with no flashing lights, loud noises or total darkness. A quiet room is also provided to audience members who need to step outside.

“There are all kinds of kids out there, and we want to make sure that every kid can get the experience that they deserve,” Sipress said.

Sipress said Lyric’s version of the show is intimate, which he feels benefits their young audiences more than a larger-scale production.

“I think kids will react more positively to it because they’re closer to it,” he said. “It’s not a big, giant arena where they could be a literal city block away from the stage.”

Set design by Dawn Drake Toney will take the audience from San Francisco to Rome, and children will learn about maps and travel as Curious George decides to make his journey overseas.

The show’s music director is Mary Brozina Wierick, with lighting design by Fabian Garcia and costume design by Jeffrey Meek. The production has roughly an hour runtime.

Sipress expressed pride in Lyric’s contributions to the local theater scene and Oklahoma theater as a whole.

“Everybody’s got their area and their niche, and I think everybody is doing such good work,” Sipress said. “And the work is only improving year after year after year. As we are. Not only are we adding our TYA component to our season, but for the past couple years, we’ve had our New Works component added to our season.”

Curious George and the Golden Meatball runs Wednesday-Feb. 17, with all daytime shows. Concessions, including a Curious George Snack Sack that contains healthy snacks, juice, stickers and a pencil, will be available to purchase. Guests age 21 and older can enjoy limited bar service.

Curious George and the Golden Meatball