Current Studio joins the Nasty Women movement to give artists a platform. 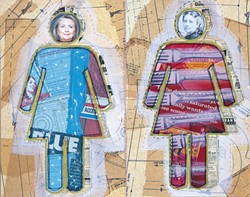 What started as an off-the-cuff snide remark during a presidential debate has morphed into a rallying cry and creative impetus for artists around the world.

Republican presidential candidate Donald Trump sparked outrage in October during the last presidential debate of the 2016 campaign when he called Democratic hopeful Hillary Clinton “such a nasty woman.” The insult was quickly transformed into a banner uniting women everywhere who have felt dismissed by men or had their assertive behavior called bossy or mean. The movement was further galvanized after Trump’s November election victory.

Romy Owens, one of Current Studio’s founding co-curators, said the results of the 2016 presidential election combined with President Donald Trump’s past boasts and alleged sexual aggressions were enough to convince the studio to get involved in the movement and fight back against a potential rollback of women’s rights.

“It seems like such a ridiculous conversation for us to continue to have,” she said.

Current Studio put out a call for Nasty Women submissions in February and received very strong feedback — not just locally, but internationally. The exhibition includes 77 artists, many of whom are from Oklahoma, as well as participants from about 12 other states and two countries (the Netherlands and Norway). Two male artists are also participating in the show.

Owens said the call for artists was kept as open and inclusive as possible. The result is a collection of works that approach the Nasty Women theme in many unique ways.

“It demonstrates a super broad perspective of points of view, of aesthetic, of media,” Owens said. “There’s everything, and that’s really what’s awesome.”

Artist Kelly Rogers’ Nasty Women work “Lion Girls” utilizes an image of two girls that has popped up routinely in some of her other work through the years. The colorful embroidery of the sketch is a reminder of the future women whose rights and value are at stake today.

Rogers said she was one of many who falsely believed the United States had somehow moved on from sexism and other social problems — at least to the point at which direct activism was not necessary. Since the election, she has seen her art steadily become more of a statement.

“I think if you’re apolitical right now, you’re implicit in what’s going on,” Rogers said. “More and more, I think my work is about empowering and uplifting women and girls and talking about the condition of women and girls.”

Marilyn Artus has two entrants into the exhibit. In the past, Artus used over-sexualized images of women from magazines like Playboy and Hustler and repurposed them into different works of art. She takes that process a step further in “Her Boxes,” in which she cuts up those works and stitches them together to form colorful cubes.

“I’m interested in reclaiming images men have been putting out for years and putting them back out and making them think about that,” she said.

Her other piece, “Hopefulls,” is a stitched-together love letter and thank-you piece to Hillary Clinton and Victoria Woodhull, who was the first woman to run for president in 1872 (before women were even allowed to vote).

“It’s shameful that she is not in American history books and we are not taught about her equal to any other male of her era,” Artus said.

Suzanne Thomas also has two works in Current Studio’s Nasty Women show. “Removed from OKC Design House 2011” is an adapted earlier work that, in 2011, had been accepted for display in the Oklahoma City Symphony Show House until Thomas was informed that someone in the organization deemed it inappropriate. The multimedia work shows ’50s-era black pinup girls posed in a way Thomas said cannot be construed as sexual.

For Nasty Women, Thomas has added the phrases “keep out” and “no trespassing” and put black censorship bars over the women’s faces. She said her intent with the original piece was to show young black girls that they are beautiful despite society’s rigid beauty standards.

“I want little brown girls to understand you have a history of beauty and glamour that is phenomenal,” Thomas said. “I have nothing against Nicki Minaj, nothing against Whitney Houston, but those women come on the backs of these beautiful women from the 1950s.”

Thomas said tradition can be a wonderful thing, but it is also sometimes used as an excuse to oppress people.

Paintings, stitching and multimedia works are not the only things one will find displayed in Nasty Women. A few artists submitted websites, and the exhibit also includes a video station. Artist Nicole Emmons-Willis, for example, made “The Power of Now,” a fast-paced slideshow of inspirational women set to M.I.A.’s song “Bad Girls.”

Current Studio partnered with OKC Artists for Justice for the show and raised around $1,000 for the nonprofit dedicated to activism and support for women’s issues just from entry fees alone.

Though unified under one phrase, each artist participates in Nasty Women for their own reason. Emmons-Willis said the important thing is they all choose to use their skills in a positive way.

“We’re not all built to run for office or to try to battle things that way,” she said, “but this is a way that we can come together and show support, maybe just doing a piece that someone can relate to.”

The purpose of the Nasty Women movement is to turn negative remarks into positive ones. Likewise, Emmons-Willis said the show’s focus should not be about Trump, but about the participating artists and women everywhere whose rights and dignities are at stake.