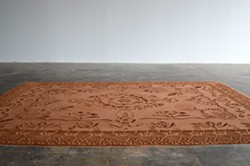 “You can’t have utopia without coffee,” Karper said.

“We were eager to develop an exhibition concept that would allow artists to submit their work and ideas to us,” Karper said. “Utopia was our first open call for artist submissions, and we received entries from all over the country.”

Utopia explores themes that are culturally relevant through the eyes of local and nationwide artists. The open call culminated in an exhibition that provides a multidimensional perspective of utopias and what they mean to artists and their communities.

Some of the exhibition pieces are existing works, while others were proposals for new works created specifically for the show. Karper and Owens selected pieces that represent a “broad diversity of media” and investigate the theme of utopia from new perspectives.

The idea of exploring perfect societies sprang from conversations Karper and Owens had within the artistic community about their collective futures and the place artists occupy within it. The recent election season also played a big part in the concept.

Karper said they wanted to “contribute to the conversation in a way that would encourage more optimistic views.”

Even so, Karper described some of the works as dystopian.

“[Through] bringing these varying perspectives together, it prompts additional questions: How can we collectively work toward common good when our definitions of ‘good’ can be so different?” she asked. “Can utopia ultimately be achieved, or is utopia found in small moments within our everyday lives? Can utopia exist without dystopia?”

The exploration and interpretation of the concept resonates with our cultural obsession with utopias and dystopias represented in fiction literature, television and movies.

Utopia exemplifies Karper’s and Owens’ dedication to creating a place for artists to create without restrictions. Current Studio’s mission is to foster emerging artists and provide them with opportunities to explore their work without worrying whether or not it must sell.

“Expect to encounter artwork in a variety of forms, some of which will invite interaction,” Karper said. “Visitors should also watch their step, as art may even be found underfoot.”