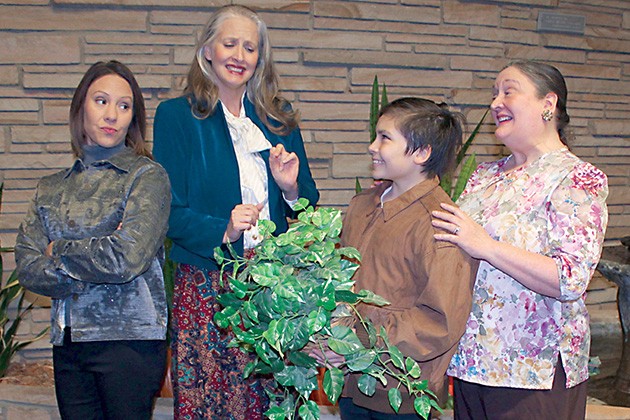 For the final play of Jewel Box Theatre’s 62nd season in its current location, director Deborah Franklin wanted to do something she’d never done before.

“It’s fun to revisit our old favorites,” Franklin said, “but this time I was just in the mood to bring something new. So when I found the play, I was really excited because I thought it was perfect for the Jewel Box audience, and I didn’t think most of them would have seen it because it’s not a really widely known play, but I think it’s one that they are really going to enjoy.”

The play, Little Old Ladies in Tennis Shoes by Sandra Fenichel Asher, runs Nov. 14-Dec. 8 at Jewel Box Theatre, 3700 N. Walker Ave. Franklin said she chose it because it offers substantial roles for several veteran actresses — something she loved about working on Jewel Box’s 2014 production of The Dixie Swim Club — and its valuing of intergenerational friendships.

“In our theater world, we’re used to that,” Franklin said. “We work with people younger than us and older than us, and we become very fond of those people and those friendships. … But it isn’t something that everyone experiences.”

Franklin chose to set the play, which chronicles “not lower middle age” Kate Corrigan’s attempt to settle in the suburbs without becoming one of the neighborhood’s titular old ladies in the mid-’80s, around the time Franklin began working with Jewel Box Theatre.

“I was a young woman during that time, just like the lead character,” Franklin said. “I was actually younger than she is, but still, I was a young career woman, so I really related, and I liked the message of the play about living life to its fullest no matter where we are in life. I just think you can’t go wrong with that message for an audience.”

Audiences will laugh, Franklin said, but not every scene is treated lightly.

“People call it a comedy, but it has some real serious moments in it, too,” Franklin said. “Sometimes in theater, we call those ‘dramedies’ because it’s that mixture of comedy and drama, which really reflects life when you think about it. If people are just coming in for the comedy, they’re going to be a little surprised but not disappointed by the poignant moments that balance out the script.”

Denise Hughes plays Corrigan. Franklin said she cast Hughes for her ability to appear “always in control of her life” in one moment and believably pivot to uncertainty when necessary.

“She’s very organized,” Franklin said. “She’s career-driven. I was looking for someone who could play the change when she ends up in this neighborhood around all of these people generations beyond her, because then she’s a bit of a fish out of water. She’s a very successful advertiser, but what works for her in the corporate world doesn’t always work for her in this new neighborhood. So she is discovering how to deal with different situations in life, things that are just unfamiliar to her. She even says at one point, ‘This isn’t like me at all. I’m usually so organized,’ so I wanted someone who could show the contrast between the really put-together career woman and the woman who was a bit disconcerted in her new lifestyle.”

“There’s so many people who have
seen us year after year, and we’re
so appreciative of them.”
— Deborah Franklin tweet this

While Corrigan sees an uncertain future in her new neighborhood, her presence gives her elderly neighbors a new perspective.

“The little old ladies in tennis shoes have kind of stalled out in their lives, and the young woman who is moving forward kind of shakes things up for them,” Franklin said. “You don’t want to give away too much about the play, but it is about these little old ladies who are really needing a path for going on in life and where they’re going, what they’re going to do with their lives at this point.”

Like Franklin and Hughes, Chris Harris, who plays neighbor Molly Blumenthal, is a familiar name and face to the theaters’ regular patrons.

“At Jewel Box, there’s this connection between actors and the audience,” Franklin said. “We were rehearsing the other day and … one of the audience members kind of peeked through at our rehearsal and said, ‘I love every time you’re on stage.’ They recognize her, and they feel a familiarity with her. We may not always recognize the audience members, but we feel the familiarity with them. … There’s so many people who have seen us year after year, and we’re so appreciative of them.”

Franklin, who first performed at Jewel Box in a 1983 production of The Star-Spangled Girl, said she didn’t realize until recently that Little Old Ladies in Tennis Shoes would be the final Jewel Box production in the current location at First Christian Church, but she is proud to direct it.

“There is certainly, I hate to say, pressure because I don’t want it to sound negative, but there’s definitely an honor in being the last show that is going on in that space,” Franklin said. “Jewel Box has been a really important part of my life, and I have such great memories of all of the fabulous actors and directors and tech people I’ve worked with there, so knowing that I am wrapping up at the theater is a real honor to me. It is bittersweet because I’m so excited to do my show, and it’s sad to see the theater close. But the theme of this play is living life to its fullest no matter where you are.”

“They haven’t found a definite place, but they’re definitely bringing the theater with them,” Dunbar said. “We’re still very successful. We’ve still got loads of season ticketholders and people who come for various shows. We don’t want to lose that or end that, so I’m going to do my best to make that continue to happen.”

Though the final play in the original location is one many people aren’t currently familiar with, Franklin said it has potential to become a new favorite.

“It’s a little scary when you pick a play that people haven’t heard of,” Franklin said. “I thought it was good, and the people who selected it thought it was good … and so far the people who’ve been working on the show, backstage and onstage, have been really excited about it. My cast is really honored and excited to perform this last show for the audience. … We hope they have a good time, and we hope we leave them with things to think about.”