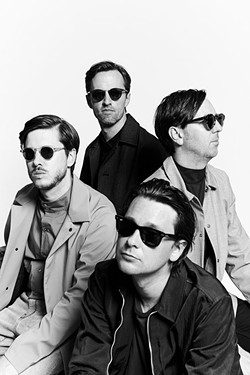 Technology is changing the world at a rapid rate. The changes in prevalence of information and the speed at which it travels are obvious to anyone who has been living in a digitized society.

Many have grown used to life in the information age and are now numb to frequently rehashed moaning on the future’s uncertainty.

Still, there is something jarring about hearing Cut Copy founder, vocalist and keyboardist Dan Whitford speak on the subject. If anyone is embracing change in the digital age, certainly it would be the self-starting synth pop DJ and former graphic designer whose band has crafted smooth electronic soundscapes that have been conjuring images of tomorrow since its debut studio album in 2004.

Haiku from Zero, released Sept. 22, is the Australia-founded indie quartet’s fifth proper studio album and its first since 2013’s Free Your Mind. Among other themes, Haiku from Zero touches on the idea of information overload in the modern era and the increasing complexities of life in the face of technology meant to simplify it.

Is Whitford afraid of the ever-evolving digital sphere? Is he excited for new possibilities or interested to see how it all develops?

The answer is most likely a blend of all these things.

“It’s like anything that’s a little bit new,” Whitford said in a recent interview with Oklahoma Gazette. “I think, without realizing it in the last five or 10 years, the way that we live has changed in this pretty insane and dramatic way. Just realizing that and thinking about that, it brings up all these thoughts.”

Whitford is intrigued by the idea of a changing world simultaneously being a positive and negative thing. In the midst of technological submersion, he wonders if man won’t learn something deeper about itself.

“A lot of it is kind of strange and disorienting, and some of it can kind of end up being something poetic and beautiful,” he said.

During the course of writing Haiku from Zero, Whitford kept a notebook that he filled with words, phrases and quotes that stuck out to him. Anytime he saw something interesting, he would write it down.

When he was picking out an album title with the rest of his bandmates (a roster that includes guitarist Tom Hoey, bassist Ben Browning and drummer Mitchell Scott), they went over some of the phrases he had jotted down. His colleagues liked some and didn’t like others as much. However, one phrase that particularly resonated with them was what became the eventual album title.

“It’s one of those things where I think you can kind of pull your own meaning from it,” Whitford said. “I certainly have my take on it — just this idea of finding poetry or order in chaos. But I think it could mean different things to different people.”

The album title makes sense in context to the record’s music. The tracks feel dense and busy with sound, but in a way that more closely resembles a vibrant rainforest than a frustrating big-city traffic jam.

Take, for instance, the album opener “Standing in the Middle of the Field,” which gives off a near-tropical groove with a well-executed blend of layered xylophones and cowbells.

Haiku from Zero might be Cut Copy’s best replication of what it is capable of in a live setting. In a world where electronic music can feel produced and polished to a fault, this project is a tangible release where real instruments don’t get lost in the shuffle.

“We wanted to work on something that was kind of the opposite of that,” Whitford said. “We’ve always been a band that played live instruments while having other kinds of electronic elements. This time around, we wanted to focus on what we do as a band on a stage and when we tour and explore that a bit more.”

Though Haiku from Zero is intricately arranged, it actually closes on a song that might be the band’s most stripped-down effort. “Tied to the Weather,” channeling simple but evocative songs like the Nine Inch Nails’ recent cover of David Bowie’s “I Can’t Give Everything Away” and Prince-written “Nothing Compares 2 U,” offers a closing respite from the more complex earlier tracklist. The song is by and large no more than a sobering, souped-up Whitford vocal track.

Cut Copy knew it wanted to close the album out on a note of restraint, but restraint can be a lot to ask of a band known for its sonic layering. Whitford said the temptation to tack more elements onto “Tied to the Weather” was a lot to overcome in the studio.

“It almost turned into something a little too grandiose, where the rawness of the emotion kind of got lost,” he said.

As it has been four years since the band’s last album, Whitford said Cut Copy wanted to switch up its recording process. While its most recent past releases were mostly do-it-yourself efforts with a nearly unlimited amount of time to experiment, Haiku from Zero was made with the help of producer Ben Allen (credited for mixing the band’s 2011 release Zonoscope) in a finite span of studio time.

“We actually had to launch and try and get things finished,” Whitford said, “which, in a weird way, was kind of good motivation for us.”

None of this is to say the band quit its experimenting altogether. Whitford said there was a tiny room in the back of the studio in which they set up two microphones. All four of the band’s members jammed into the tight space like a phone booth and recorded in close proximity in an attempt to capture a more raw and vivid sound.

“A lot of the final recordings that are on the album are actually a combination of our fully polished studio stuff but also bits of that gritty, tiny room we recorded in,” Whitford said.

As digitalization further injects itself into everything, some have wondered aloud whether physical instruments will one day be replaced by the synthetic sounds of software.

“If that happens, I’m just going to quit music and start a yoga retreat or something,” Whitford said.

The Cut Copy vocalist said while the tide seems to have turned on the popularity of live bands, things come and go in cycles. He does not foresee instrument use becoming extinct anytime soon, but then again, he is sure of little outside of future uncertainty.

“Obviously, our worlds revolve around technology now, so of course that’s how you’re going to make music,” he said. “But as far as where it goes from here, I’m as eager to find out as you. It’s a bit of a mystery at this point.”