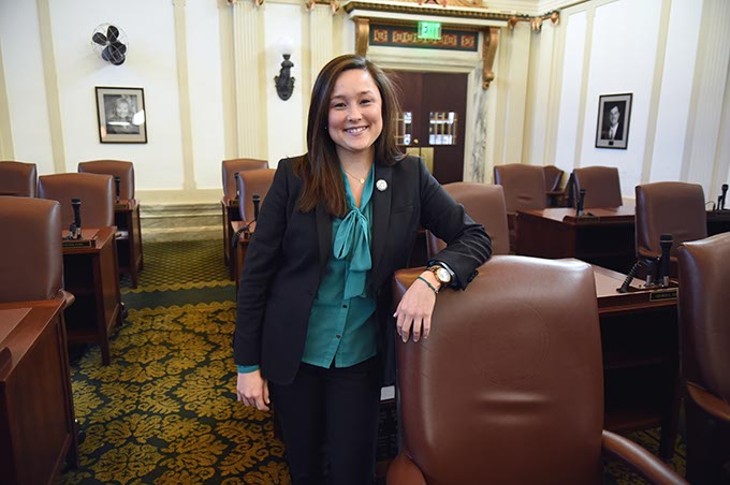 It was one of the first items the Democrat unpacked following her special election victory Sept. 8.

The well-known expression is Munson’s mantra; she exemplifies the Energizer bunny in her commitment to chasing goals. The 30-year-old Asian-American is living testament to following her own motto and now represents a section of northwest Oklahoma City, including neighborhoods near Lake Hefner and into Nichols Hills, The Village and Crown Heights.

Her quest to serve District 85 didn’t stop after losing in 2014 to incumbent Rep. David Dank, a Republican who had held the seat since 2006. The defeat stung, but not enough to quit politics. Instead, Munson redirected her energy to 2020 Oklahoma, a political action committee dedicated to increasing the number of women Democrats in the Oklahoma Legislature by 2020, exactly 100 years after the 19th amendment guaranteed all women the right to vote.

Munson didn’t anticipate seeking the District 85 seat so soon after co-founding 2020 Oklahoma, but Dank’s sudden passing in April left an open seat in the 101-member chamber. She filed a declaration of candidacy, rallied millennials and went door-to-door. During her campaign, she addressed education, jobs, and women’s issues, defeating Republican candidate Chip Carter.

“It was a surprise for a lot of people,” Munson said during a Dec. 18 interview with Oklahoma Gazette 101 days after the election. “I think there are people who doubt I will win again. My goal is to work. I know it is not going to be easy balancing being a new legislator while running a campaign at the same time.”

In the back of Munson’s mind is the statewide primary election June 28, followed by the Nov. 8 general election. Most house lawmakers have at least one legislative session under their belts when campaigning before primary elections. That wouldn’t be the case for Munson, who plans to start knocking on doors in January.

“I look at this as another opportunity to overcome an obstacle,” said Munson before pointing to her sign.

“My job is to stay focused and do every thing I can. I worked hard in my campaign, and I am bringing that same work ethic into serving as a representative.”

Come Feb. 1, Munson will take a seat behind her desk in the House of Representatives, a setting not entirely foreign to the freshman legislator. Munson frequented the gallery as a political science major at the University of Central Oklahoma.

Her public servant preparation began early; she credits her father, a 22-year U.S. Army veteran, as the one who inspired her to public service.

“We always talked about civic engagement, voting and this being our duty,” explained Munson, who was raised in Lawton. “When you have a father who puts on a uniform every day and tells you voting is your duty, you make sure you vote.”

On her 18th birthday, which fell during the American Legion Auxiliary Oklahoma Girls State program, Munson registered to vote. At the program, which provided citizenship training to high school students, Munson decided her involvement in politics would extended beyond the ballots.

On a recent visit to Oklahoma City Public Schools’ Roosevelt Middle School, students informed Munson that voting doesn’t matter. It wasn’t the first time she had heard that viewpoint, but she always counters.

“Everyone’s vote counts,” she said. “Sometimes things don’t go our way. But your vote counts. Anytime we yield our vote, which is what I tell students, we are giving an extra voice.”

It’s a tough paradigm to change in a state where younger voters aren’t the only group not participating. During the 2014 election, only about 40 percent of registered voters exercised their constitutional right.

Millennials, perhaps more than any other group, voice their opinions often. Munson argues that it’s not enough to post on social media.

“That is a place to voice your opinions, but you’ve got to put action behind it,” she said. “That means voting.”

To increase voting, Munson is pursuing vote-by-mail legislation, meaning a ballot is mailed to registered voters in advance of Election Day and traditional voting precincts are closed. In 1998, Oregon became the first state to conduct elections exclusively by mail. Proponents of vote-by-mail believe voter participation increases as voting barriers, such as transportation and limited voting hours, are removed.

The first Asian-American state representative, Munson is interested in what her constituents think of those issues and others. She spent her first 100 days speaking to residents, specifically those who didn’t check “Munson” on the ballot or didn’t vote at all.

“We should be listening to everyone,” Munson asserted. “Unfortunately, how the system is set up, it’s those that vote that get heard. That’s not a good way to stay in office nor to hold those in office accountable.”

Munson holds high hopes for the state’s future but believes it will require citizen participation in politics and civic life. She encourages women, minorities and millennials to seek office. It’s time candidates break the mold of politician stereotypes, including those of age, marital status and name recognition. According to Munson, a diverse Legislature will better reflect the state’s demographics.

“It takes hard work, thick skin and bravery,” responded Munson when asked about advice for women candidates. “We have to get away from questioning our qualifications and who we are in the community. We are important, vital voices. We have to step up to the plate and run.”

Munson knows stepping up isn’t easy, but it all goes back to her mantra: Never give up.

“When I look at my life and some of the things I’ve gone through, I think, ‘I shouldn’t be here,’“ said Munson. “There are a lot of meetings I sit in on where I think, ‘I don’t belong here.’ There is a reason I am here, and I will use my voice the best I can to bring about change in my community.”

Print Headline: Model millennial, As she prepares to take her place in the Oklahoma Legislature, Cyndi Munson focuses on citizen participation.