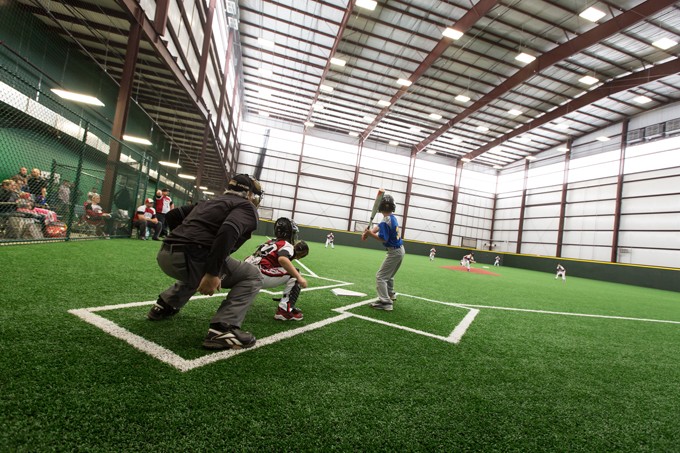 Business partners Todd Currie and Eric Dahlgren grew up playing baseball together at Casady School, graduating in 1993. They lacked a place to practice outside of school, so Dahlgren’s parents bought an empty lot next to their house and built a batting cage.

“That’s what we practiced on,” Currie said inside his new venture, D-BAT Oklahoma City Academy, 801 NW 122nd St. “There was nothing like this.”

Now parents themselves, the friends wanted a place for their children to play. Currie, the Oklahoma general manager and vice president of operations for TierPoint, a St. Louis-based IT company, and Dahlgren, who founded Oklahoma City-based Quail Creek Petroleum Consulting LLC in 2006, built a 50,000-square-foot, multimillion-dollar baseball and softball shrine. It includes 14 indoor hitting and pitching tunnels, a full-sized major league indoor infield and a fully stocked pro shop.

It is the first of two forthcoming metro D-BAT franchises. They are scouting locations for a Moore location that could open in 2016.

Founded in 1998, the first D-BAT location in Dallas had two employees, including former collegiate and professional baseball player Cade Griffis. Emphasizing well-lit, climate-controlled, pro-caliber facilities and player-centric individual instruction, D-BAT began franchising in 2008 and has grown to 23 locations across the country.

Currie and Dahlgren signed with D-BAT in late 2012, attracted by its nontraditional business model, including franchise fees on memberships only and multiple revenue streams.

“We really liked the people and their model,” Currie said.

The 23,000-square-foot indoor infield can be used for practices and youth games, and Currie said D-BAT is organizing youth tournaments and adult whiffle ball and kickball leagues. The venue also has meeting space, a birthday party room and a lounge. The pro shop offers D-BAT brand equipment.

“Our bread and butter is really that 6- to 14-year-old player who’s trying to get to that level to try to make his high school team,” Currie said.

The facility is located next to D-BAT SportsPlex, which offers 12 fields for league play and tournaments. The complex operated under several owners until Currie and Dahlgren bought it in 2014. They reopened it last year and are making improvements, including updating new scoreboards, lighting, dugouts, concessions and shaded spectator areas.

The property, which is under a 55-year commercial lease, is part of about 750,000 surface acres across the state under CLO management. Created under the federal Oklahoma Organic Act of 1890, the office predates statehood, Willis said.