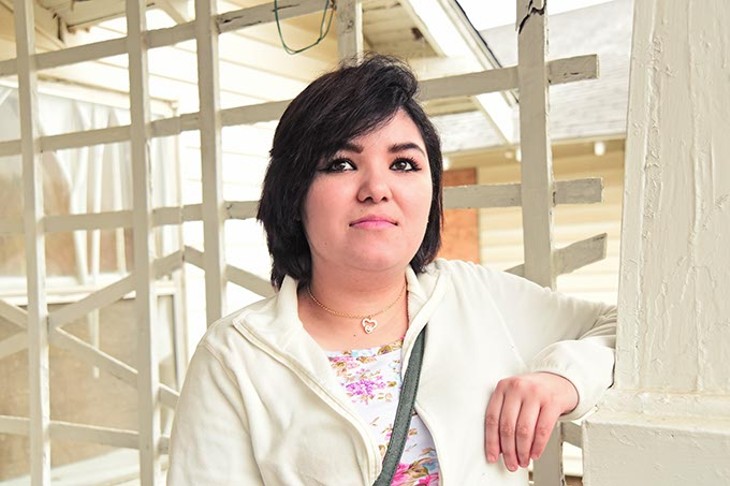 The temptation to go back to Mexico to be with her family was strong for Kenia Hernandez, a senior at Classen School of Advanced Studies (SAS) who was separated from her parents two years ago.

“My mom told me you have more opportunities over here than over there in Mexico,” said Hernandez, whose parents were deported two years ago. “She told me to try my best. Maybe someday I could become a [U.S.] resident and just go visit Mexico freely.”

Hernandez moved to the United States at age 6, and while she tries to stay focused on her studies, graduation day later this year presents her with a tough decision: stay in America without the proper documentation and risk deportation or leave the country she grew up in to be with her family.

But because of a $465 grant for a Deferred Action for Childhood Arrivals (DACA) application, Hernandez can apply for a work permit and obtain a driver’s license, providing her with some stability as she enters college.

“This means I won’t have to fear being deported from my home,” Hernandez said.

The grant was one of seven recently issued by Aspiring Americans Initiative, a local nonprofit that provides grants to help Oklahoma students file immigration applications. Aspiring Americans also recently presented two college scholarships for students who did not qualify for state or federal assistance.

Carolina Duenez, another senior at Classen SAS, was also awarded a $465 grant to pay for her DACA application.

“The grant meant a lot to me,” Duenez said. “It made my life a bit easier. I had slacked off on my application at first because coming up with the money was hard. [But because of this grant,] I was able to send it in the next day and get approved within a week.”

Aspiring Americans grants cover the $380 DACA application fee, along with the $85 biometric fee.

In two years, over 680,000 applications across the country were submitted to DACA. Eighty-six percent received approval, according to the Migration Policy Institute.

Controversial program In 2012, Oklahoma Policy Institute estimated the state was home to nearly 140,000 immigrants and 9,180 undocumented minors who would be eligible for DACA.

Oklahoma is in the top half of states with citizenship requests, ranking No. 22, according to the U.S. Department of Citizenship and Immigrant Services. But less than 1 percent of all DACA requests originated in Oklahoma.

However, state leaders have argued against DACA, and Oklahoma Attorney General Scott Pruitt joined dozens of other states in fighting Obama’s actions.

“We believe that not only the state of Oklahoma but states across the country have, in fact, been injured as a result of the president’s action,” Pruitt said in a November 2014 interview with National Review.

Patel does not have data on the Oklahoma City school district as a whole but said a survey last year at a local charter school found 25 percent of students were undocumented, offering an example that the need exists locally, especially in schools with high Hispanic populations.

Undocumented students are not always Hispanic, Patel said, but half of the district’s student population is Latino, according to data from the Oklahoma City Public School District.

“The grants may seem small, but they really are life-changing,” Patel said. “When a student has DACA, their entire concept of themselves completely changes. They don’t have to worry about living in the shadows.”

Not only does DACA allow students to legally work and apply for college, it also opens up the opportunity to get a driver’s license.

With DACA, Hernandez can focus on continuing her education after high school rather than wondering if she will be forced to leave her home.

“I want to get into college, maybe OCCC (Oklahoma City Community College), then transfer to the University of Oklahoma,” Hernandez said. “I think I want to major in criminology. I was really uncertain before, but now I can plan for my life.”