The tribe’s goals are, in essence, to protect water sources and sacred land and enforce government-tribal treaties and tribal sovereignty.

The conflict at Standing Rock pushed Sterlin Harjo, the Seminole-Muscogee director of Barking Water, Four Sheets to the Wind, This May Be the Last Time and his latest project Mekko, to use his talents and profile to shine a brighter spotlight on the issues of environmental spoilage and the ongoing violation of tribal sovereignty.

“Being an activist was never my thing — I always wanted to be an artist — but I found myself leading a rally yesterday in Oklahoma City to support Standing Rock, so you have to do your part,” Harjo said of the early November protest outside the Oklahoma State Capitol.

Harjo recently spoke with Oklahoma Gazette while on a short break during what is always his busiest month.

“It is pulling all these different tribes together. There’s a lot of apathy in the world — money always wins, corporations are too powerful — but at Standing Rock, they’ve stood up and said no, that we can do something about it, but we have to come together and we have to be peaceful.”

Peace is always a good policy, but for the people banding together to protest the DAPL, it is essential when going up against corporate and governmental power structures. Dallas-based Energy Transfer Partners planned the 1,172-mile underground pipeline to transfer oil from fields near Tioga, North Dakota, through Iowa and to a tank facility in Patoka, Illinois.

The pipeline is expected to cost $3.7 billion.

The issues that initially forced the Sioux Nation and Meskwaki tribes into action were the processes by which Energy Transfer Partners acquired the right-of-way for the pipeline and the potential long-term environmental impact.

The company secured the right-of-way through a combination of voluntary easements, or right-of-use agreements, and eminent domain.

The Sioux Nation argued that it was not properly consulted on the development and the underground structure, which was rerouted away from Bismarck, North Dakota, after city officials expressed concerns over environmental impact, could threaten the tribe’s water supply.

“Taking advantage of natural resources [on native lands] has been happening to Native Americans for years, and the cycle continues to repeat itself,” said Roberta Botello, president of the recently formed Native American Faculty and Staff Association at the University of Central Oklahoma (UCO). “When people don’t have a perspective on what ‘rez life’ is up in North Dakota with the Sioux, they don’t understand that they don’t have an infrastructure like Edmond or Oklahoma City. I know the best thing I can do is say my prayers and keep those people in my thoughts in everything I do today.” 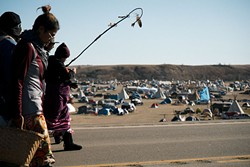 “The upside to Native American month is a lot of people I know wouldn’t have as lucrative of careers if not for Native American month,” he said. “A lot of artists get asked to go, and paid to go, to speak at colleges and show their work. There’s a lot of art shows that happen this month — some of these artists wouldn’t get as much exposure without Native American Heritage Month. As an artist myself, I’m always booked up in November. I leave tomorrow, and I’ll be back in 11 days, then I’ll be back out again.”

Those 11 days away from home include time at Standing Rock, where Harjo will shoot video as part of a documentary project with several filmmakers.

Because major news networks have expended few resources in covering the protests — likely a casualty of the incessant 2016 presidential election coverage, he said — Harjo and the other documentarians will capture the spirit of the protests as well as law enforcement’s treatment of protesters.

“It mobilizes you, because when you have 100 friends in jail, you have to do something,” said Harjo, who saw his friend and a frequent actor in his films, Casey Camp-Horinek, arrested during the protests.

“When you’re there, you feel like you’re in a really special place,” Harjo said. “You hear songs from all these different cultures, you see people taking care of each other, feeding each other, living the way humans are probably supposed to live.”

“I think when you go back to the Stone Camp [on the Standing Rock Indian Reservation], you see a lot of togetherness,” Rush said. “I think a lot of the individuals who have been on the front line need to step back, go pray down at the camp and to go back in. The togetherness is important. We have to understand why we’re even there. Don’t be there if you want to create violence. Don’t be there if you want to be disrespectful. It’s supposed to be peaceful.”

Nonviolent protest can be hard for many to process.

“It’s driving the Dakota Access Pipeline people insane, because they would love it if we were in the streets, fighting and throwing rocks and burning things,” Harjo said. “That’s what they really want us to do — to the point where they’re even lying about it. They would love us to do it, because they could strike back and not be vilified for it. Instead, they’re having to be violent against the water protectors up there and it looks really bad on them.”

While the protests have been largely peaceful, Botello said the peace is not always reciprocated.

She said that with mainstream media not paying sufficient attention, filmmakers like Harjo can do a lot to capture what is happening at Standing Rock.

“I absolutely hope that it will open more eyes. When I turn on the TV, I expect to see the reality of what is happening,” she said. “Our Natives are being maced and dogs are being released on women and children and people are being shot with rubber bullets and their faces are black-and-blue. We’re not seeing that in the news media — I’m seeing that on Facebook.” 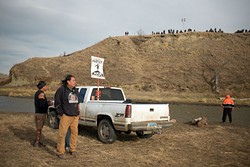 As early as George Washington’s presidency, the federal government regarded First Nation peoples and their use of valuable land as the “Indian Problem.”

Whether it was the displacement and relocation of the Trail of Tears or the opening of Indian Territory to non-Native settlement during Oklahoma land runs, a continuing thread through the history of the United States of America involves taking Native American property, disregarding tribal culture and history and neglecting the agreements made between tribal and federal governments.

Washington’s view was that Native Americans should be “civilized,” which meant teaching them European values, lifestyle and religion, thereby diluting tribal systems by assimilating indigenous people into Western culture.

Harjo said that variations of this doctrine continued well into the 20th century.

“My grandmother, who helped raise me, was part of a program where they relocated people to cities,” he said. “They offered them jobs. They’d say, ‘Come to the city and make money,’ but really it was to take them out of their communities and break up the tribes.”

With the Dakota Access Pipeline standoff, the “Indian Problem” is being handled in much the same way it has been for the intervening 300 years.

But now, with the prevalence of social media, it is much harder to get away with blatant land grabs and much easier to organize protests.

“It is such a prominent issue, and it affects the entire community,” said Jessica New Moon, a Ponca and president of the UCO Native American Student Association. “Even though we all come from different tribes, we’re all connected.”

But if the anti-DAPL protests have any impact beyond their immediate goals, it could be that they coalesce North American tribes and nations into a unified political force, one that can command attention during any month of the year.

“Just the fact that we’re alive is powerful,” Harjo said. 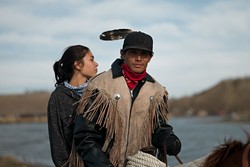