Dancing for a Miracle raises funds for Children's Hospital Foundation 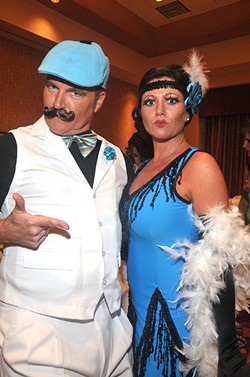 Nine years ago, four couples took the stage and danced their hearts out. They also created a fundraising legacy. Dancing for a Miracle, an annual Children’s Miracle Network Hospitals event that benefits Children’s Hospital Foundation, returns Saturday with a gala at Embassy Suites by Hilton Norman Hotel & Conference Center, 2501 Conference Drive, in Norman.

The evening begins at 6 p.m. with a cocktail reception. The silent auction, dinner and live auction begin at 7:30 p.m., and dancing begins at 8:30 p.m.

“He kept saying, ‘There’s money in dancing,’ and it was about the time that Dancing with the Stars began,” Dunham said. “So we followed that model and paired professional dancers with local celebrities.”

They also added a challenge: The person who raises the most money for Children’s Hospital Foundation wins.

Dunham has coordinated the event from the beginning and loves how much it has grown.

“That first year, we had about 200 people in the audience,” she said. “Now it’s expected to have more than a thousand.”

“Our goal for this year is more than $600,000,” Dunham said. “And it all goes to pediatric research and education programs.”

Over the past eight years, the event has raised more than $1.5 million.

It’s a commitment for the dancers, who, in addition to spending at least 20 hours rehearsing, also compete to raise money in a variety of creative ways.

Cathy Cummings, owner of Vito’s Ristorante, competes this year after she was asked in prior years. She laughed when asked how she became involved.

“You mean how did I get roped into this?” she said. “When I ran for lieutenant governor in 2014, we had taken a few ballroom dance lessons because we had to attend so many events. … I was approached to participate then, but I wasn’t sure of the time commitment.”

“You can be sure that 100 percent of your donation will stay right here in Oklahoma and will go toward helping children, which I am all about,” she said.

She acknowledges the challenge of such ambitious fundraising, particularly this year.

Cummings has held a benefit at her restaurant and will donate restaurant gift cards and other items for the Dancing for a Miracle silent auction.

A committee of about 20 people work year-round to orchestrate the event.

Dancing for a Miracle