The chefs at Guyutes have cooked up a bird that will definitely put a different spin on holiday get-togethers this season. 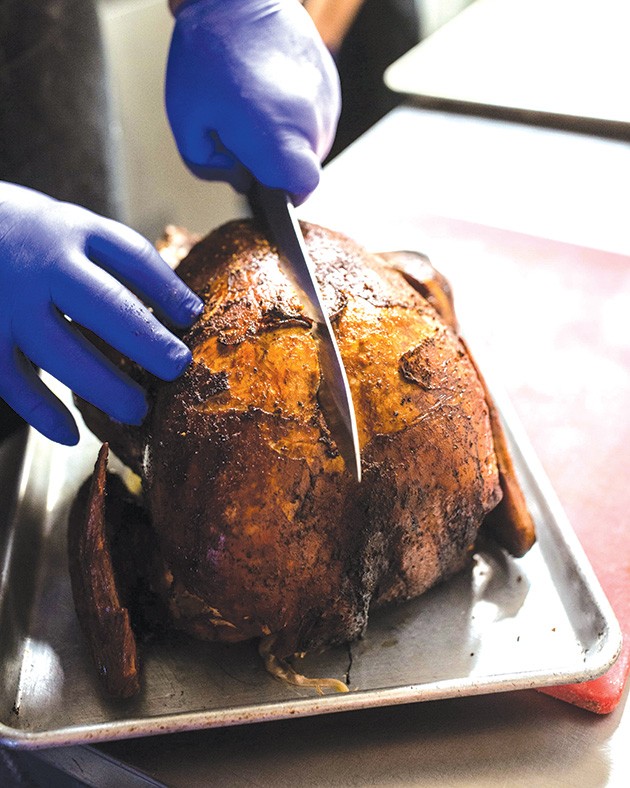 Your family, a smorgasbord of side dishes and a big ol’ turkey soaked through with cannabis butter — what could go wrong?

Each month, the chefs at Guyutes try their hands at a cannabis-infused recipe that brings cannabis-infused cooking into the 21st century. This month’s dish is their largest (by weight) endeavor yet. Jarrod Friedel and Matt Pryor took the same approach to their turkey as they did the Thai smoked hen back in July.

“Get a bunch of paper towels and dry it off. Pat-dry it as much as possible so that the rub sticks to it,” Friedel said. “You’ve got to do the inside too.”

After removing the innards, take the roasted onions carrots and, optionally, potatoes and stuff them inside the bird.

“Usually, turkey legs are long enough that you can wrap them around and stick them through this little hole and that seals that stuff up,” he said.

After applying the rub, inject the turkey with the infused budder.

“You're going to look for any sort of openings you can without puncturing the skin itself. Stick it right up in there and just start filling it slightly,” Friedel said. “It’s pouring out a little bit as it fills. You won't lose a lot of it, but you will lose a bit anyways. You’ll kind of see it puff up.”

Then put it in the smoker.

“Let it smoke 30 to 40 minutes per pound. Make sure you keep your eye on the wood and the water so you always have water in there, so you’ve got moisture going and you want wood in there so you keep smoke going, the heat up, and the smoke flavor in there,” he said.

Re-inject the turkey after four hours while still inside the smoker.

“I don't ever leave the smoker until I pull it out. I just stick my hand in there and find little openings,” Friedel said.

For this turkey, Friedel used a particular strain for its scent and taste.

“It was GMO, which is Garlic Mushroom Onion,” Friedel said. “And I chose it because it actually smelled like garlic, mushroom and onion, so I knew I didn't have to use as much herbs and I was also hoping the herb from the medical marijuana actually came back out.”

I’ve got a love-hate relationship with turkey. I tend to stick with dark meat on Turkey Day because it’s more flavorful and juicy than breast meat. It’s also a difficult meat to smoke because the low fat content provides less opportunity for the smoke flavor to infuse into the turkey. This recipe made me reconsider what I’ve thought about white meat turkey. It was juicy and flavorful while the smoke and seasoning rub added a nice blend of hickory flavor and some heat. Over three different doses, I didn’t receive any medical benefits of the budder infusion. I was concerned that the infusion would have too much of a high, so I went easy on the first dose but later ate an entire 6-ounce piece of breast and still didn’t feel much. It provided a little bit of a body high, which means that it’s possible to indulge in a true Danksgiving without falling asleep by dessert. —Jacob Threadgill

2) Peel and section off four carrots and two onions. Place them on foil, drizzle them with oil, sprinkle them with salt and roast them at 400 degrees Fahrenheit for 5-10 minutes.

3) Remove the neck and innards from the turkey. Wash the turkey inside and out with cold water.

4) Dry the turkey as much as possible with paper towels. This will help the rub adhere to the turkey.

5) Stuff the turkey with roasted onions and carrots.

6) In a mixing bowl, combine all the dry ingredients and mix them with a fork. With your hands, rub the mixture all over the turkey, inside and out.

7) Set up a double boiler for budder. Once the budder is melted, draw it into a syringe.

8) Inject the turkey with the budder, attempting to not break the skin. You should be able to find areas where the skin has peeled back to insert the syringe. Inject the budder slowly, and slowly remove the syringe as you are injecting. Try to inject all major meaty areas. (You will lose some budder in the process, so overdo the dosage slightly. Also keep in mind that you will be injecting the turkey again, so use the budder wisely.)

9) Place the turkey in the smoker, breast up, and set a timer. The general rule of thumb is 30 to 40 minutes per pound of turkey.

10) Baste the turkey every 2 hours with nonmedicinal butter or a flavored oil. (I personally use a garlic oil to baste my turkey.)

11) Watch the water to make sure it doesn’t evaporate, and add more mesquite to keep smoker smoking.

12) Inject the turkey again after four hours. Be careful; it will be hot.

13) Start checking the temperature of the turkey at four hours and continue every hour until an internal temperature of 165 degrees Fahrenheit is reached.

14) Remove the turkey from the smoker and allow it to rest at room temperature for 20 minutes.

1) To clarify the butter, melt it in a 2-quart saucepan on low to medium heat, being careful not to scorch it. Once melted, adjust the heat to maintain a low boil and cook off the milk solids and water.

2) After 45 minutes, the butter should be clear with a lot of foam on top. Place a cheesecloth over a jar and pour the butter into it. Do not squeeze.

3) After the butter has drained, remove the cheesecloth and pour the clarified butter into another saucepan. Add the decarboxylated marijuana.

5) Strain the butter over another cheesecloth back into the jar. Allow the budder to cool or use it immediately.