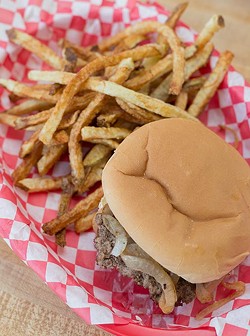 In retrospect, the armor was a mistake.

Time travel, as anyone knows, is a very tricky business. Step on the wrong butterfly and, suddenly, you end up with John F. Kennedy winning the presidency or George Lazenby only making one James Bond film.

So you take precautions. You try to get your outfit right and your lingo down pat. Don’t carry money printed after the time period you visit. Little stuff like that can make a big difference.

But I screwed up. I’m not sure why I thought Dan’s Ol’ Time Diner, 8433 S. Western Ave., was Dan’s Olde Tyme Dyner. Maybe I wrote it down wrong.

Whatever the cause, it turns out that Dan’s is an onion burger joint in modern-day Oklahoma City and not, as I surmised, a tavern in feudal-era England. 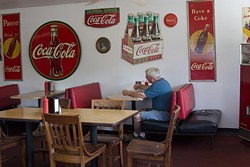 Still, people didn’t seem to notice the clank of my suit of armor over the general clatter of a pretty hopping hamburger place. Customers come and go frequently, and the staff works like a well-oiled machine.

As you might assume, the menu is somewhat limited. Unlike most diners, Dan’s doesn’t dally with breakfast. Dan is all about those burgers, and thank goodness for that.

A 1/8th-pound onion burger will run you $3.39. Slap on a slice of cheese for 60 cents more. They slice the onions up daily, and they’re extra thin, so when they sit on the griddle, they caramelize into a sweet, stringy heap.

Some people don’t like raw onions. That’s understandable. Raw onions are sharp, with a weird heat that people find unpleasant. But cooked onions, the kind you’ll find sizzling away on the flat-top grill at Dan’s, are a different beast altogether.

The application of heat changes the chemical structure of the onion, breaking down large starch and sugar molecules into smaller sugars in a process called pyrolysis. Those smaller sugars taste sweeter to the tongue. The scorching-hot stove also pushes the water out of the onions, which softens them.

So when you say, “I don’t like onions,” you probably don’t mean these onions.

You can dress up your onion burger with whatever you like. Bacon is 80 cents extra, but lettuce, tomato, pickles and condiments are free at the center bar. I like mine simple — a little mustard and a couple of pickle slices.

The Double Dan is more beef, more onions and more of that sweet Maillard reaction that makes hamburgers one of our most beloved national dishes. Dan’s Ol’ Time Diner makes a juicy burger, and the more meat and onions you stack on, the juicier it gets. 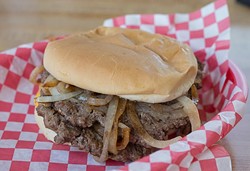 A Double Dan is like a flavorful sponge just waiting to spill all those beefy, cheesy, onion-y juices on your taste buds. I like mine with cheese, but I like everything with cheese. Sometimes I put cheese on top of cheese — I find it pairs well with cheese. On a Double Dan, the cheese holds everything together perfectly. I think it’s one of the best burgers in town.

There is no shame in not getting a burger, though, because Dan’s has a pretty wonderful BLT on the menu. Technically, it’s a bacon sandwich ($4.39), but you can apply the lettuce and tomato from the center bar at your leisure.

If you prefer to just eat a pile of crispy, chewy bacon on a couple pieces of deeply buttered Texas toast without vegetables, then I like your style, cowboy. 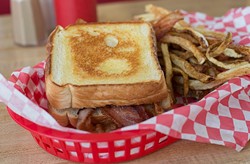 The bacon cheese tots ($4.29) are going to lure many of you in, but I urge you to save your stomach for worthier endeavors. Freshly fried, the tots are perfectly serviceable on their own. The cheese on top is melted American, and the bacon is a chopped-up version of the kind on the BLT. 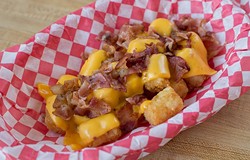 The ingredients all work alone, but together, they just don’t make much of an impact. It’s a dish that sounds good in concept but fizzles when it hits your mouth.

For the freshest side, you’ve got to get the french fries, which are cut daily and fried in peanut oil. Some are crispy, some have a little more give, but all of them are delicious. They’re each unique, like snowflakes, if snowflakes could be deep-fried and served with ketchup.

And even if you don’t go to town — or you’re dressed for a Ren Faire — you should definitely go to Dan’s Ol’ Time Diner. It’s a perfect example of a restaurant that does one thing and does it exceptionally well.

What works: A Double Dan with cheese is a half-pound slice of heaven.

What needs work: The combo of tater tots, cheese and bacon is surprisingly uninspiring.

Tip: Bare burger? Check out the condiment island in the middle of the dining room.