L.A. Witch returns to Oklahoma to cast its spell on Opolis.

The members of garage rock trio L.A. Witch are known as true road warriors. Their reverb-laden tunes filled with dark and moody 1960s and ’70s callbacks have taken them to every corner of the country and overseas multiple times — a great accomplishment considering their self-titled debut album was released just seven months ago.

This week, the band returns to Oklahoma for the first time since its album release, playing 9 p.m. Monday at Opolis, 113 N. Crawford Ave., in Norman.

L.A. Witch is hoping its return visit to the state is not as nerve-racking as the last.

“We thought we were going to die,” said Sade Sanchez, the band’s guitarist and charmed vocalist.

Though L.A. Witch has been lucky enough to see much of the world through music, the Southern California natives got their first taste of Oklahoma tornado season during a visit to Norman last year. Bassist Irita Pai said she had been in places where there were tornado watches issued but not actual warnings.

“This was the real thing,” Pai said. “It touched down in the city of the gas station where we were.”

As sirens wailed outside, Sanchez was cooped up inside a bathroom stall. She was literally sick from the stress of the nearby twister — not even well enough to pick up her phone and text friends or family about her situation.

“I got really sick, and I thought I was going to die,” Sanchez said. “I was on the bathroom floor, throwing up. I was like, ‘Damn, this sucks! I’m going to get sucked by a tornado, and I feel like shit.’”

Luckily, the tornado never ended up striking the gas station or sucking up the L.A. Witch crew.

Though L.A. Witch toured for around three years before releasing its debut album, the recording aspect of being a band was never on the backburner. Drummer Ellie English said it just took a while before the band got everything right. L.A. Witch recorded its album three times before arriving at the final version.

“We were touring at the same time we were recording, so the songs would evolve on the road,” English said. “We would come home and listen to the recordings, and it was like, ‘Oh, well this song kind of changed now.’”

L.A. Witch began five years ago. Pai had been jamming with some friends and was introduced to Sanchez through them. The two formed a trio with another drummer, but when that drummer left the band, Sanchez reached out to English, who had played in bands with her previously. 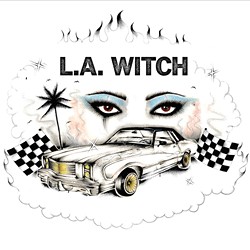 Recording its almost entirely self-produced debut while balancing a relentless tour schedule proved to be quite a challenge. Furthermore, the band imposed a very high standard for itself. It was hard for Sanchez to not get caught up in the permanence of its first release.

“The majority of [the recording process] was really a lot of suffering and struggle because you have all this pressure on you,” she said. “It’s such a permanent thing, and you’re totally aware of that. You want to put something out that you’re going to be happy with for the rest of your life.”

For a long time, the bandmates were aiming for perfection, but as the months went by, they began to realize that music — and particularly rock music — is not about achieving perfection. Understanding that was a liberating feeling, and soon, recording turned into a more enjoyable and informative process.

Sanchez is relieved to finally have an album out and have a tangible accomplishment under the band’s belt. The debut makes the band seem more legitimate in the eyes of some listeners.

“Obviously, there is YouTube and Spotify and stuff like that,” Sanchez said, “but really what you want is something you can hold on to and listen to on a record player.”

The album did more than increase L.A. Witch’s credibility among fans. It raised the band’s confidence in itself.

“You don’t really feel like a band until you have a record,” Sanchez said. “It’s almost like you don’t have anything to show for it.”

L.A. Witch does not hide from its ’60s and ’70s garage-rock feel. Sanchez credits her parents for bringing her up around that kind of music. But while the band might be rooted in The Rolling Stones, Black Sabbath and producer Phil Spector’s Wall of Sound, L.A. Witch is more than a tribute to past eras.

“A lot of people do tend to put us in that category,” Sanchez said. “We’re influenced by so many different genres of music as well, but I would say our roots as a band are definitely within that realm.”

There are a lot of psychedelic and shoegaze influences from bands like The Brian Jonestown Massacre and My Bloody Valentine on the debut. The song “Untitled” carries an intriguing mix of country and psychobilly influence inspired by Jeffrey Lee Pierce.

“[Pierce] came from a really blues, rock, punk kind of background,” Sanchez said. “The Gun Club (of which Pierce was the founding vocalist and guitarist) was a big influence, and that song is an example of that influence.”

Sanchez is noticing something different at L.A. Witch shows. Since they put out their debut record, fans have actually started singing along to their songs.

“Now you know that if people are at the show, it’s probably because they’ve heard the record before, and that must mean that they liked it,” she said. “For us, it’s kind of a little bit of confidence for the band and it’s cool to see that happening.”

L.A. Witch comes from a do-it-yourself punk mindset that still pays dividends even as it works with the successful Seattle-based Suicide Squeeze Records label. Sanchez recalls the band’s early days before they could afford to order proper shirts and merchandise. On at least one occasion, they went to a thrift store and found the cheapest possible shirts and spray-painted their own designs onto them for resale to fund their tours.

“We always found a way to make it work,” Sanchez said. “I think that is kind of the mentality you have to have when it comes to any form of art. The money is not always going to be there. Sometimes you’re fortunate to have that, but as long as you’re passionate about it, you’re going to find a way to make it work using whatever resources you happen to have.”

L.A. Witch has worked hard to get where it is today. But it was a labor of love every step of the way.

“This band is our baby,” Sanchez said. “It’s what we’re all really passionate about.”