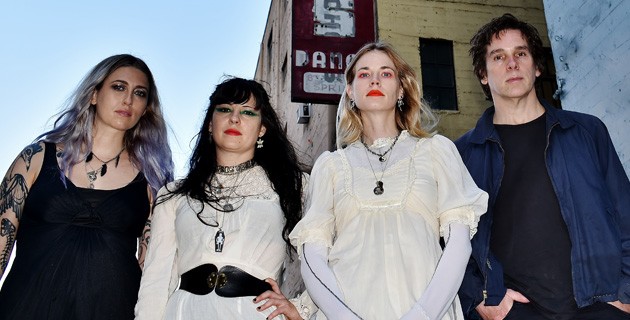 “The years leading up to Darkness Rains was all about learning, trying to just really dive in and see how people perceive death — what death is, what we think it is, what we think happens after we die and all these things,” said vocalist/multi-instrumentalist Bonnie Bloomgarden. “And sort of along the way, it led us to certain beliefs, mainly because of Terence McKenna and such, and this song, it sort of led us to a happier place. You can’t change death, but you can change the way you view it.”

Los Angeles’ Death Valley Girls plays 9 p.m. Nov. 9 at Opolis, 113 N. Crawford Ave., in Norman. Bloomgarden said playing Darkness Rains’ morbid freak-outs such as “More Dead,” “(One Less Thing) Before I Die” and “Born Again and Again” night after night is “always really intense, for sure,” but the band’s jazz-influenced “anything goes” approach to songwriting means being open to performing whatever music is “channeled.”

“We didn’t really know, exactly, before we wrote it, what it sounded like,” Bloomgarden said. “We wrote a lot of it in the studio, so playing it around, it’s definitely cool to see how it affects other people, but I don’t know exactly how it affects each of us. But that’s not necessarily the point. We just like playing together. ... It just sort of comes to us in a weird way, and then we lay it down. Then we realize what the words are, and we sing it once and add layers. It’s kind of magical.”

“I’m trying to find how to write in advance, but that’s not really the way I do it,” Bloomgarden said. “They all just flop out at once, on that day, for whatever amount of songs we’re going to do. If it’s five, then all five songs, the lyrics come, and it’s not my business to tell the universe how to work. I wish it was a different way, but so far, I haven’t been able to crack the code to whatever that is, to non-procrastination, or maybe I should do more magic. I’m not sure. This is just the way that it happens for me, but I don’t recommend it.”

As the band name and song titles “Unzip Your Forehead,” “Occupation: Ghostwriter” and “T.V. in Jail on Mars” make clear, the occult-obsessed blues rock is laced with at least as much humor as menace, and band interviews reveal more reverence for Billie Holiday and The Gun Club than Satan or Charles Manson. Death Valley Girls’ music, Bloomgarden said, is meant to be fun.

“It’s a hard time out there, and during the Depression, instead of all movies being about how hard and horrible life was, they made movies that were, like, extravagant about millionaires and all this stuff, and they tried to uplift people,” Bloomgarden said. “And I felt like there needs to be people that are politically angry, but there also needs to be people to serve the entertainment needs. We find ourselves kind of on that precipice, trying to do both, because we do want to entertain and uplift, and sometimes that’s hard to remember. But that’s the only personal battle is just remembering that people need to sing songs and people need to be happy.”

Music can work as a magical force, helping listeners cope with negative and overpowering emotions through cathartic sing-alongs.

“There’s a lot of songs on Darkness Rains that I think are good for people to sing,” Bloomgarden said. “Most people’s experience isn’t seeing the songs live, but in their car or going through a big life change or when you’re kids, a certain song or record is just totally your whole persona for a time, and I think the songs are kind of mixed on Darkness Rains — songs to sing when you’re mad or sad. Everyone’s got to sing a song.”

Working with idols — opening for Roky Erickson and filming the Andy Warhol-inspired music video for “Disaster (Is What We’re After)” with Iggy Pop — Death Valley Girls saw the transformational power of rock ’n’ roll in the flesh. 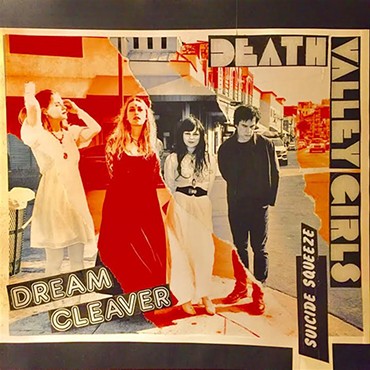 “Nobody gets to be those guys — Roky or Iggy or anyone — without having something so, so, so special, just an energy that comes off of them that you could spot, like, a mile away,” Bloomgarden said. “It’s like an incredible magic power. I think that is really cool. Sometimes you want to be like, ‘I don’t get why that person’s famous,’ but there’s a reason. There’s always a reason, and they are magical. Even if they’re awful people, they emit some sort of magic that can’t be taught. They’re born that way, for sure. We’re just lucky that the two people we’ve met, Roky and Iggy, are the coolest people ever. They radiate awesomeness.”

In an interview with LA Weekly, guitarist Larry Schemel called The Stooges’ Fun House “the height of human accomplishment,” but Bloomgarden said hanging out with frontman Pop was surprisingly unintimidating, and the resilience of both Pop and son, who re-emerged for multiple comebacks in their careers, is inspiring.

“You would think it would be, like, overwhelming terror, but it’s just super chillness,” Bloomgarden said. “They just totally have this aura about them that makes you feel good. There’s one point when I was sitting next to Iggy, and I was like, ‘What is going on? What is happening?’ I thought if I could see myself doing this I would explode, but it just felt so chill. ... Also those guys made it so many times. ... That’s a really cool thing; that’s something to learn, to keep on keeping on. People need you.”

While Bloomgarden doesn’t consider herself the same kind of force, she said she also wants her shows to have a positive effect on the audience.

The band’s macabre aesthetic isn’t meant to intimidate anyone, Bloomgarden said. Death is nothing if not inclusive.

“It’s just what we think is cool,” Bloomgarden said. “The dark side and all that, that’s really cool, and ghosts are cool. Paranormal stuff is cool. We’re obsessed with it, but mainly, we’re here to bring the good word of rock ’n’ roll around the world. As long as we do that, everything’s gonna be OK. … We’ve tried weird things before, but it’s not a good idea. We don’t practice that type of witchcraft. Everyone should do whatever they want, but we just want to make people happy, and we want them to listen to rock ’n’ roll. When you’re a kid and you’re a goth or whatever and you think everyone hates you or you hate everyone, you need friends, and we can be your friends, too. It’s something for everybody.”