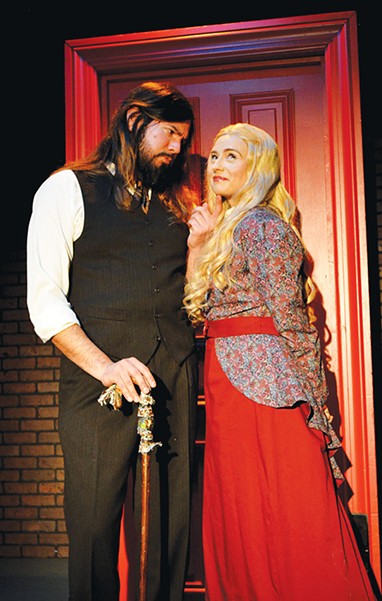 “This is a really unique adaptation of a classic story that everyone thinks they know,” said Carpenter Square Theatre artistic director Rhonda Clark, “and Hatcher does a really good job with giving the flavor of Victorian England but also putting his own spin on it and adding a little bit of humor.”

Stevenson’s novella and Hatcher’s play document the drastic transformation of morally conflicted Henry Jekyll into the wicked and violent Edward Hyde after a botched scientific experiment, but the original work only includes one Hyde, while the stage adaptation, which debuted in 2008, features five.

“It’s just a real wonderful challenge for actors because most of the actors play multiple roles with different dialects, and five of the actors also play Hyde, the dark alter ego,” Clark said. “Sometimes they’re playing Hyde individually, and sometimes all five Hydes are onstage as kind of a Hyde chorus in a way, with different levels of Hyde. Some are the slightly more gentle, romantic side, some are the more vicious side and some are more gentlemanly and some are more street. So that’s kind of fun.”

A 2008 Playbill article quoted Hatcher explaining his unconventional alteration to a story that has been adapted several times for stage and screen and parodied countless times.

“In my version, the roles are somewhat reversed, as are some aspects of Jekyll and Hyde themselves,” Hatcher stated in the article. “One of the arguments I’ve never quite believed — and I suspect Stevenson didn’t believe it either — is that Henry Jekyll is wholly good while Edward Hyde is wholly evil. I’m trying to have some fun with the notion that Jekyll and Hyde play a cat-and-mouse game with each other and with the question of just who we should be rooting for.”

By having everyone in the seven-person cast except for Jekyll (played by Rick Lockett) and romantic interest Elizabeth Jelkes (Christine Lanning) take turns playing Hyde, director Clark said the play makes Hyde a more fully developed character, painting a more nuanced portrait of good and evil.

The actors playing Hyde — Albert Bostick, Rob May, David Burkhart, Kaylan Ferrell and Ford Filson — all play multiple other characters as well, Clark said, and the fast-paced nature of the production requires them to change characters without elaborate makeup or wardrobe costumes, relying instead on dialects and body language.

“We’ve got people doing a standard British dialect,” Clark said. “We’ve got Scottish. We’ve got kind of a northern British dialect, we’ve got cockney, so it’s just kind of a variety to delineate their characters from each other because there really aren’t many costume changes. Maybe a jacket is going to come on or off, maybe add a shawl, maybe an apron. You know, that sort of thing. It’s really streamlined that way. … Two of our actors actually play a character of the opposite sex. [Ferrell] plays Poole, Dr. Jekyll’s butler, and another actor, [Filson], plays a young girl who’s almost attacked by Hyde in the first scene of the play.”

Of the directions Clark gives the various Hydes, one applies to every actor: Approach each scene with a “specific attack.”

While the depiction of Hyde becomes more nuanced in Hatcher’s script, the other characters are also complicated by less-than-admirable traits, even without the aid of mad science. 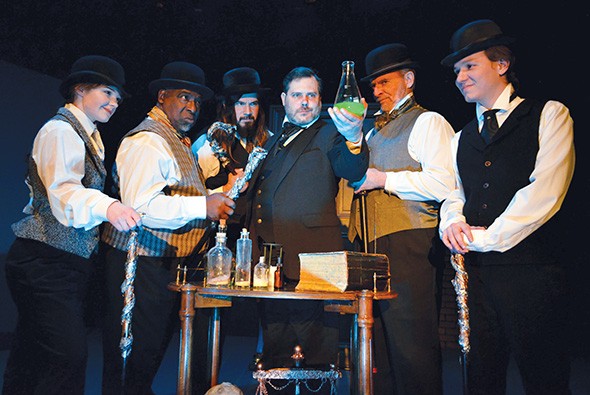 “Even the quote-unquote ‘upstanding citizens,’ some of them have a darker side that can come out, just like Jekyll does, only he has used tinctures and powers and potions — drugs, in other words — to bring out his dark side, and theirs just comes out in the moment, depending on what’s going on around them,” Clark said. “For example, [May] also plays a doctor, but he’s a doctor that has more than just an educational interest in dissecting cadavers for his students, and he’s a pompous SOB besides that. And then [Ferrell] also plays a maid who at one point observed Hyde attacking a man outside her window, but as she tells us about the attack, you realize that she was excited and couldn’t take her eyes away from it. She’s drawn to it and also wants to tell us.”

Casting actors up to the challenge of playing multiple complex roles required Clark to carefully consider several factors during the auditions.

“Whenever you’re casting, you think about the physical aspect of the character — size, height and all that sort of thing,” Clark said. “I really wanted to think about the different kinds of Hyde they would be — the young romantic, the older gruff controlling, the more physically strong and vicious. With one actor, I laugh and I call it the ‘Mufasa Hyde.’ He’s like the growling lion. … That’s why I took my time with the casting to make sure I had a good variety of physical types and a range of vocal types — different kinds of voices and approaches.”

In addition to regular evening and weekend performances, the play will be presented for high school students in two 10 a.m. weekday matinees on Feb. 28 and March 8 as part of the theater’s educational outreach program.

Teachers from these schools will receive study guides that include suggested supplementary activities as well as historical and geographical information about the play’s setting, biographies of Stevenson and Hatcher and a glossary of the “interesting words used in the play that are not necessarily what we say today,” Clark said. Schools will also have the opportunity to have theater representatives lead classroom drama workshops on improvisation, creative writing and storytelling.