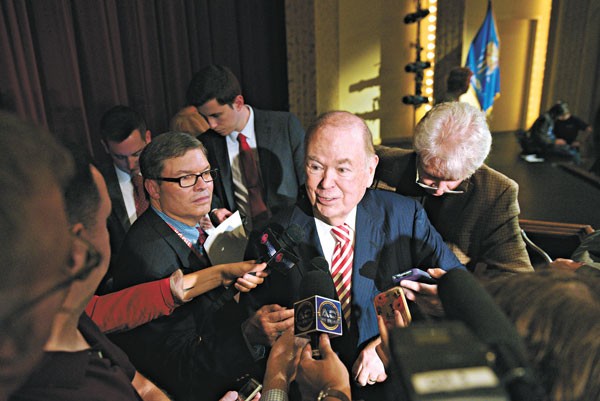 The applause continued for nearly a minute, by the end of which a majority of the students, university administrators, faculty and staff had risen in their seats. University of Oklahoma President David Boren responded by addressing the crowd packed into the Donald W. Reynolds Performing Arts Center once more.

“As I look out on all of you, I have a full understanding of what it means to invest your life in some cause and some institution far more important than yourself,” Boren said.

Moments before, Boren delivered his speech declaring his intent to retire at the end of the academic year, June 30, 2018.

Since 1975, when Oklahomans elected the Democrat as their 21st governor, Boren has been in the public eye. The son of an Oklahoma congressman, Boren later went on to serve in the U.S. Senate, where he chaired the Intelligence Committee. Boren’s career in the Senate ended in the fall of 1994 after he accepted the position of president at his home state’s public research institution in Norman.

The university’s board of regents hired Boren, a graduate of Yale University and OU College of Law, to commence a profound transformation from a public institution with an outstanding athletic department to a university with a growing national reputation for academic excellence, research prowess and a successful athletic program. Within a year, Boren launched the largest private fundraising drive in the university’s history — $200 million by 2000 — and hired a new head football coach, Howard Schnellenberger.

The changes Boren ushered in over a 23-year period have been historic.

From his office in Evans Hall, Boren has led OU through significant progress and growth since taking office. The university has added more than 30 new programs, including the Honor College, College of International Studies, Religious Studies Program and Stephenson School of Biomedical Engineering. In addition to establishing a research campus on the Norman campus, Boren led efforts to reorganize Presbyterian Research Park in Oklahoma City to OU’s University Research Park just east of the OU Health Sciences Center. During Boren’s tenure, the Stephenson Cancer Center and Harold Hamm Diabetes Center were established at the health sciences center and private fundraising topped $3 billion from private donors.

Boren called OU’s progress a team effort, one predicted when he was installed as the president over 23 years ago.

The search for the university’s 14th president is in the hands of the seven-member board of regents, who are appointed by the governor. Oklahoma City businessman and Thunder owner Clay Bennett serves as the current chair.

Recruiting a college president is no easy task; finding a president who will continue to advance Boren’s successful agenda will be difficult.

Back in 1994, when the regents selected Boren, they were ahead of their time by hiring an individual with no experience in higher education administration but plenty of real-life experience in fundraising, budgeting, advocating and deal-making. According to the American Council on Education, the most common road to the American president’s office is academia, but college presidents coming from posts outside of higher education is increasing.

Burns Hargis, a well-known name in legal and business circles in Oklahoma, became Oklahoma State University’s president in 2008. Robert Henry, who served as a judge on the U.S. Court of Appeals 10th Circuit and as Oklahoma’s Attorney General, will conclude his seven-year presidency at Oklahoma City University this summer when he retires. Don Betz arrived at the president’s office at the University of Central Oklahoma after 45 years in academia.

It’s too early to tell if OU will continue with another academia outsider with impressive credentials in politics or business or if leaders will look internally or at other universities’ administrators. U.S. Rep. Tom Cole, former U.S. Rep. Dan Boren (Boren’s son), former Gov. Brad Henry and Joe Harroz, who currently serves as OU law dean and previously served as the university’s general counsel, are some of the early names being tossed around as possible candidates.

Boren’s retirement is effective June 30, 2018, unless a permanent successor has not been named. Boren will remain president until the search is complete. 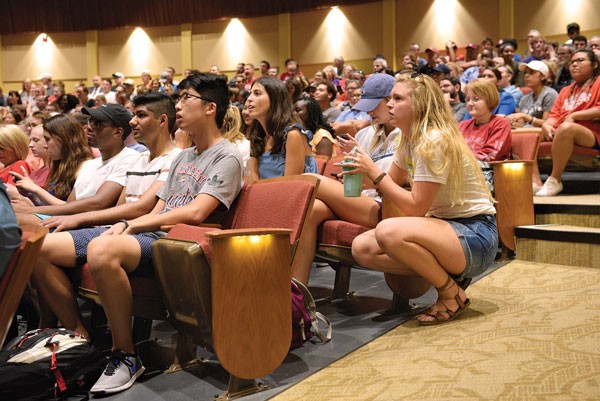 Over the next nine months, Boren can expect to hear more praise as OU and the greater university community celebrate his legacy. Already, university officials have announced the International Program Center, which Boren founded in 1996 and led to its establishment as the College of International Studies, will bear his name after his retirement.

Boren, who turns 77 in April, won’t go far from Norman. After he clears out his office and home at OU’s Boyd House, he will continue to enter the classroom. Since he arrived on campus, Boren has taught an undergraduate political science class. He intends to keep teaching, tacking on more years to his already-impressive resume of 51 years of public service to Oklahoma.

As he announced his retirement as president, the “most rewarding period of his life,” Boren reflected on his own convictions that a career spent helping others is the ultimate reward in life.

“I often say to our freshmen at our opening convocation that I wish I could give each one of them the gift of finding a purpose greater than themselves in which to invest their lives,” Boren said. “I am filled with gratitude for all of those who have allowed me to receive that gift in my own life.”

Print headline: Transformative presidency; After 51 years of service to Oklahoma, David Boren announces his plan to retire. The college president, former U.S. senator and governor leaves behind a legacy of a true statesman.