Day of the Dead celebrates life with several events in OKC

Religious beliefs in Mexico embrace the idea that death is a natural force, a part of life. A Latin American custom that meshes Aztec ritual with Catholicism, the Day of the Dead — Día de los Muertos — is a combination of Halloween, All Souls’ Day, and All Saints’ Day, celebrated from Oct. 31 to Nov. 2 to pay respect to those who have died.

The dead are believed to have permission to visit friends and relatives on earth once a year, during the Day of the Dead. Not a gloomy celebration, it’s rather joyous and happy, with all family members present. Beginning on Saturday and ending Sunday, families gather at cemeteries and place favorite foods and drinks on the graves of deceased family members. Songs are sung and prayers are said, and the family cleans up around the graves. At the cemetery, families hold night vigils and are serenaded with folk songs and sometimes fortified with shots of tequila.

Also at the cemetery, marigolds are placed on the family graves. The orange color of marigolds, cempasúchil, also called the flor de muertos, or “flower of the dead,” is believed to lead the deceased souls to their homes.

Pictures of the deceased and favorite foods are often included on personalized home altars.

The bread, shaped like a skull and crossbones, has sugar sprinkled over it. People can also create and bring their own small altars to Casa de los Milagros. 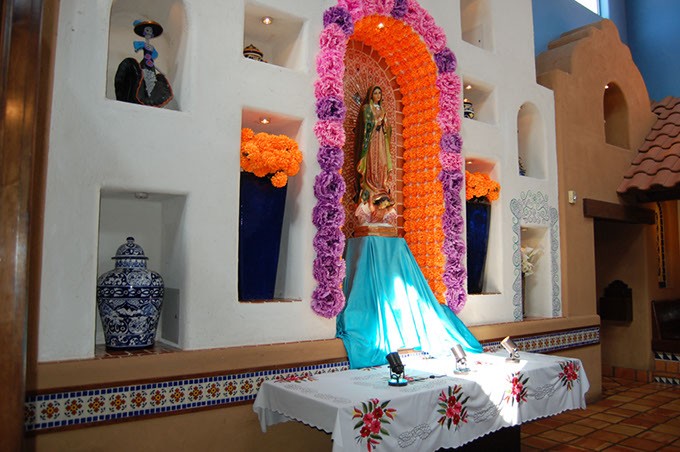 1. Holiday celebrations will also be held at Plaza Mayor at the Crossroads and the University of Oklahoma in honor of Halloween, All Saints’ Day and All Souls’ Day.

The Second Annual Fall Festival at Plaza Mayor Friday through Sunday at 7000 Crossroads Blvd. will combine Halloween traditions from the United States and Día de los Muertos from Latin American countries in celebration of both holidays. The three-day festival will begin with a trick-or-treat event on Friday from 6 p.m. to 8 p.m. that will feature tenants of Plaza Mayor passing out candy, as well as a costume contest at 7:30 p.m. on the center stage.

Various age groups will make up categories for the contest with a $100 cash prize going to the winner of each.

The Saturday celebration at Plaza Mayor will focus mostly on the students of Oklahoma City Public Schools and will feature a reception for artists participating in the student art gallery, which will be open to the public all weekend.

There will be student performances on the center stage all day, and the event will also feature arts and crafts, face-painting and traditional skull decorating activities from 3 p.m. to 6 p.m.

The last day of the festival will feature artists performing throughout the day.

2. The OU Hispanic American Student Association will host its version of Day of the Dead from 6 p.m. to 10 p.m. Friday at the Walker Adams Mall, 300 W. Third St., on the OU campus.

Admission to the festival is free for all ages, but some activities, like traditional skull face painting, will require a small fee. Participants are encouraged to wear Halloween costumes or other traditional Day of the Dead costumes.

All proceeds from the event will support scholarships for the Association of Latino Alumni and Friends.

Print Headline: Bring out your dead, The Day of the Dead, Día de los Muertos, is alive and well and celebrated in the Oklahoma City metro area.