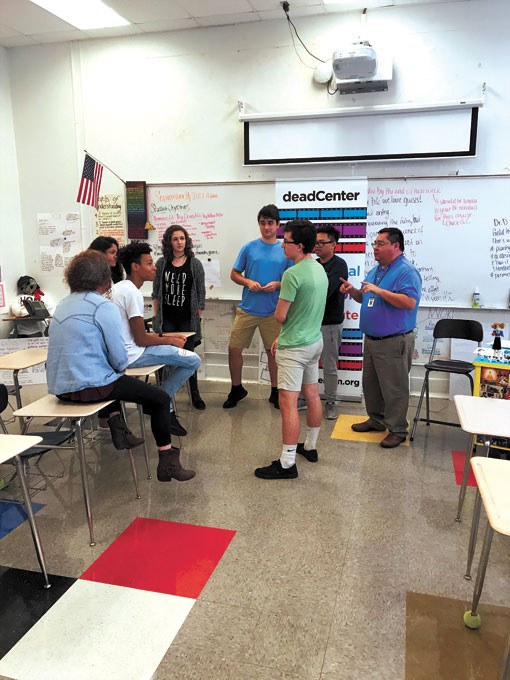 In its first year of full-fledged existence in 2011, deadCenter Film Festival’s statewide high school education program was focused on teaching teenage students how to make a movie. But executive director Lance McDaniel said after visiting several schools, the local nonprofit organization found out it can make a difference in a much more useful way.

“What we heard that first year was, ‘Boy, I’ve never heard that guy speak in class,’” McDaniel said. “The teachers who were the most impressed were like, ‘Oh my gosh! Because of what you did, I heard that guy talk.’”

As it turns out, a lot of teenagers (and many other kinds of people) love movies. Using class time usually devoted to textbook study to instead discuss what they liked about their favorite films was revolutionary for some students who lacked the motivation or courage to speak up before.

When McDaniel began hearing teachers and students at different schools they visited making the same compliments to the program over and over again, it was an epiphany.

“Because I’m a chatty person and was all through high school, it didn’t occur to me that that’s what was necessary,” he said. “But after we started going to a lot of schools, what we found out was, ‘Wow! Those quiet kids will stand up and talk about a horror film or a comedy or a superhero in a way that they won’t volunteer to answer a question about Shakespeare.’”

Since that first year, deadCenter’s statewide education program has shifted its focus from filmmaking to generalized creative thinking, and with great results. McDaniel and other deadCenter representatives visit around 30 schools each year, ranging from Oklahoma City’s urban core to rural Guymon and Durant.

deadCenter, known by most as the popular four-day summer film festival in downtown OKC, has started to sprout a reputation for education efforts. The statewide program received the Governor’s Arts in Education award in 2014.

All of deadCenter’s education efforts are always free. deadCenter is an Allied Arts member agency, and its statewide program is underwritten by the OKC nonprofit coalition.

McDaniel said he thinks Allied Arts sees the value in deadCenter’s statewide program and its ability to assist a teenage base that is often underserved in the arts. And the schools the program visits love the way they promote student engagement.

“That really has become the fundamental thing that teachers love about us,” he said.

McDaniel travels all over the state to visit schools for the program. This year, deadCenter is targeting schools in towns with populations of 2,000 or less. Most of the schools involved in the program were, at some point, contacted by deadCenter. Many of them are repeats from past years. Some were referred to the program by other schools.

The program focuses on visiting small, distant towns because those schools are less likely to be visited by other city arts organizations. These smaller schools are where McDaniel believes they can make the biggest impressions.

“There’s towns that don’t have a movie theater — lots of them,” he said.

In a typical school visit, deadCenter will interact with students in a number of ways. They are asked to partner up and come up with their own movie concept. They go through a mock audition for a movie part.

McDaniel said he often shows a short clip from the Chickasaw Nation-funded movie Pearl and asks students to list every job involved in putting that scene together (both on-camera and behind the scenes).

“Our goal is to show that this piece of film you may see online has 75-200 people working on it,” he said. “One may just be doing the graphics for the door, and someone’s job is to drive the truck with the wood on it to build the set. It’s getting them thinking about, ‘Well, if movies are that way, so is everything.’”

Not every student is interested in becoming a filmmaker. McDaniel said the goal of the program is to get them thinking in new ways and realize that there are a number of ways they can impact a community.

“It gets them thinking about all jobs,” he said. “There are a million jobs out there in almost any industry.”

Outside its statewide high school visits, deadCenter has two other components to its work in education. One is deadCenter University, a competitive entry high school program for students with a greater passion for filmmaking.

Last year, more than 60 students from across the state were accepted into the program. The students come in during the week of deadCenter Film Festival and gather at Metro Technology Centers’ Springlake Campus to work on their own film project. While there, they will work with and receive guidance from the talented actors and filmmakers involved in that year’s festival.

McDaniel said deadCenter University has become one of the biggest selling points for bringing in out-of-town filmmakers. A lot of people are eager to share their passion with a younger generation.

“Anyone we bring in town, we say, ‘We’d love for you to meet with these high school kids,’” McDaniel said. “Almost every single one of them is like, ‘Absolutely.’”

McDaniel said deadCenter is interested in enriching the local film industry, and part of that is ensuring state writers are producing the best scripts they can. 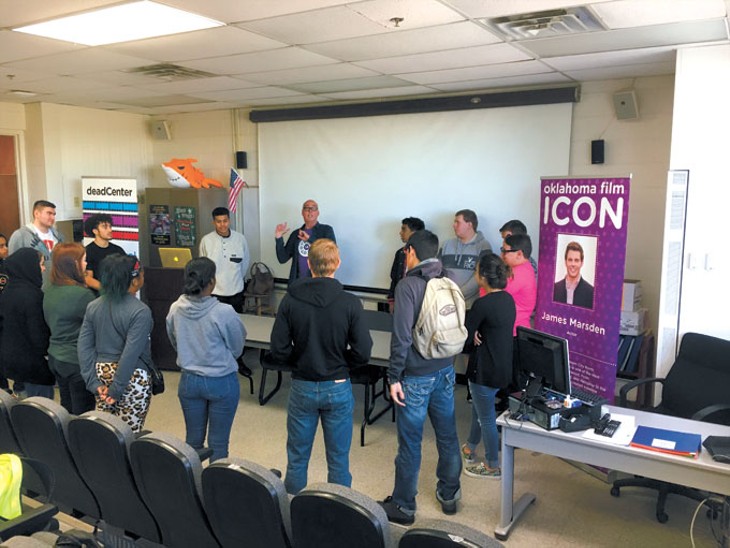 Traveling all over the state means being on the road as many as three days a week in the fall. McDaniel sometimes finds himself sleeping in a small-town hotel room alone to reach the furthest schools. Still, he regrets nothing.

“It’s worth it because the goal is that we want to go where people aren’t getting exposed to stuff,” he said.

In his many travels, McDaniel has noticed one thing about education in Oklahoma: There are bright students and teachers in literally every school. No matter where he goes, he leaves impressed with someone he encountered.

The challenges students and educators face, he said, come from the support — or lack thereof — around them. McDaniel said deadCenter wants to do its part to help give everyone involved in education the greatest opportunity to succeed.

“I feel great about education in Oklahoma because I think we’ve got tons of smart kids and we’ve got good teachers,” he said. “We just need to bring up the structure around them.”