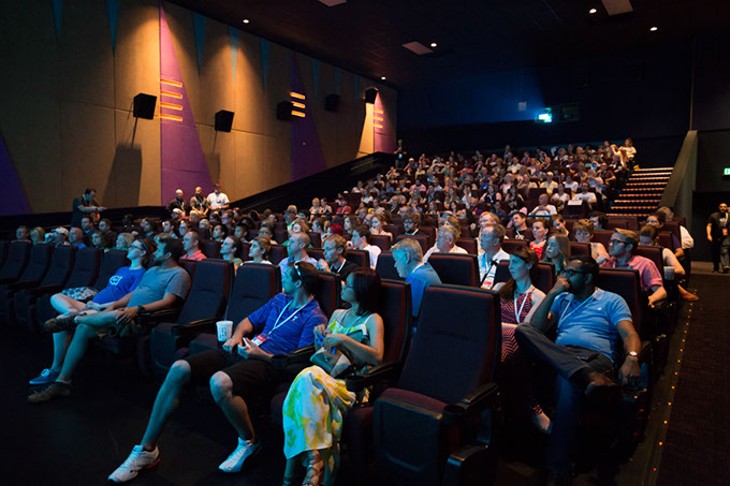 DeadCenter Film recently named commercial real estate investor and developer John Kennedy its 2017 chairman of the board, and with him comes a wave of new opportunities for filmmakers and enthusiasts alike. Kennedy and deadCenter executive director Lance McDaniel spoke with Oklahoma Gazette about new prospects in 2017.

“DeadCenter is two things,” Kennedy said. “First, it’s the biggest celebration of film in the city. … Second, it’s an education program that benefits over 3,000 students in the state. I’m excited to ensure and bring more resources to deadCenter in the next year.”

An Oklahoma native and the youngest person ever appointed as Oklahoma’s secretary of state, Kennedy holds an undergraduate degree in history from Oklahoma City University and a master’s degree in public administration from Harvard University.

“The movie A Beautiful Mind [Ron Howard, 2001] was based on a professor I had at Harvard named John Forbes Nash Jr.,” Kennedy said. “He taught us about gain theory, which Irish Realty is modeled after.”

Over 37 years, the Irish Realty CEO and founder has supported Oklahoma City’s community through its investment, development and redevelopment of historical infrastructures, negotiating with construction companies and businesses to restore city buildings into functional workplaces and architectural monuments.

“Our consulting company focuses on real estate but also conflict resolution. That’s something that’s important to me professionally and personally, and it has led us to negotiate deals on a national and global level,” Kennedy said. “In 1981, we bought the First National Center just to save it from being demolished. Now, it’s a site of business and a building that people enjoy. That building is a piece of historical architecture and art, and it tells the story of OKC.”

A drive to preserve the city’s history and culture also informs Kennedy’s new position as deadCenter Film’s board chairman. Human interests comprise the basis of any film, and Kennedy’s complex understanding and application of this humanistic foundation makes him a lucrative advocate for deadCenter.

“We were interested in getting John involved with deadCenter because he brings community-minded people to the table,” McDaniel said. “His consulting business is so successful at helping businesses figure out where they should be, and our goal this year is to map out where deadCenter is going for the next five to 10 years.”

Beyond his consulting expertise, Kennedy’s love for cinema is tied to close friendships with film industry professionals.

“In the early ’90s, my friend from high school Hunt Lowry gave me the opportunity to be on set to watch his production of The Last of the Mohicans,” Kennedy said. “Thanks to deadCenter, Lowry and I got to watch Last of the Mohicans on a giant screen in the Myriad Gardens. That was one of the greatest cinematic moments I’ve ever experienced.”

Since that moment, Kennedy’s love for film has translated into his support for deadCenter’s festival and education goals. In its 17th year, deadCenter has expanded beyond an annual film fest into an educational resource for the state of Oklahoma.

“I was asked if I’d be interested in serving as deadCenter’s board chairman and knew it was a great opportunity to contribute to OKC’s arts and culture,” Kennedy said. “I try to spend about 30 percent of my time working with the community’s nonprofits, especially in the realm of education.”

Kennedy’s involvement comes at a pivotal point for deadCenter’s education initiatives. McDaniel said deadCenter’s relevancy in the community will increase with expanded programs for youth and adults.

“We run a statewide education program where we visit around 30 high schools each fall, focusing on rural areas where arts education is limited,” McDaniel said. “Last year, we decided to launch the deadCenter Institute, which will focus on bringing educational opportunities to working professionals. We want to educate younger ages, but we also want to support those already working in the film industry to perfect their craft.”

“The thing that makes deadCenter different than other film festivals is its education component,” Kennedy said. “It has the best film education outreach program in the state and, I believe, the country.”

DeadCenter’s education program started at its festival, where professionals from the industry spoke at sold-out panels about their experiences in filmmaking, directing, acting and scriptwriting.

“It’s about building a community of filmmakers and educators,” McDaniel said. “Our goal is to help individuals improve their craft, communicate with other film professionals and ultimately make Oklahoma a relevant and influential state for filmmaking.”

This year is set to be deadCenter’s most productive one yet.

“With such a varied board,” McDaniel said, “we’ve been able to map out a strong plan for the next five years.”

Added Kennedy, “We want to mobilize creative and financial resources for filmmakers and educators through business connections in the community. Our board is made up of professionals in science, engineering, art and several other major Oklahoma industries. We’re going to ensure deadCenter continues far into the future.”