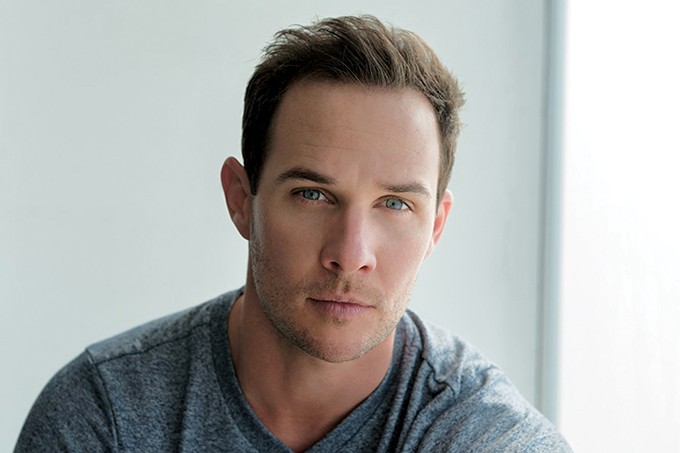 A quarter century ago, Ryan Merriman earned his first acting role on The Mommies, playing the son of comedian Caryl Kristensen on the sitcom based on Kristensen’s standup act with Marilyn Kentz. Merriman was just 10 years old at the time, which makes the Choctaw-born actor a film and television veteran at age 35.

So when Merriman is honored with the 2018 Oklahoma Film ICON Award along with Emmy Award-winning actress Alfre Woodard and virtual reality filmmaking pioneer Kim Voynar at deadCenter Film Festival Thursday-Sunday in downtown Oklahoma City, it feels a little premature to the actor.

“It’s kind of like, I feel undeserving, you know? I’m still a 35-year-old man, but I look back and I’m like, I’ve been doing this for 25 years almost,” Merriman said in a recent Oklahoma Gazette phone interview. “So it’s just a blessing and an honor, obviously. It’s just cool to be recognized obviously in your home state, but it just feels like … there’s got to be somebody who deserves this more, but man, what an honor.”

Merriman, who appears in Oklahoma City-based director Ryan Bellgardt’s The Jurassic Games at the festival, is being humble. The Mommies only lasted two seasons, but it launched Merriman on a prolific and varied career, leading to roles alongside Michelle Pfeiffer in The Deep End of the Ocean and Chadwick Boseman and Harrison Ford in 2013’s Jackie Robinson biopic 42. He also starred in Final Destination 3 and spent several seasons on the 1990s paranormal series The Pretender and on the Freeform series Pretty Little Liars.

For The Jurassic Games, Merriman plays the host of a dystopian reality TV series in which contestants compete for their lives in a simulated fight for survival against dinosaurs. His work with Bellgardt (Gremlin, Army of Frankensteins) required a great deal of interaction with placeholder objects and green screens, which were ultimately replaced with computer-generated tyrannosaurus rexes and other CG objects.

Such acting is not without its challenges, but Merriman soon found that Bellgardt was a great partner in bringing those scenes to fruition.

“Ryan (Bellgardt) would say, ‘OK, you’re talking to a drone, so look into the camera, and it’s, like, flying around,” Merriman said. “He would kind of tell you the visual. He had so much visual explanation that it wasn’t that bad.

“He would say, ‘OK, this will be like a hologram, and you’ll zoom in and you’ll see the dinosaurs, which are red dots.’ He would just tell you everything before you started shooting. But it is tough; you’re looking at crosses and dots and stuff like that, but it makes it that much more fun when you see the finished product.”

Merriman’s career frequently takes him far away from home, but his experiences with The Jurassic Games illustrated for him the ways in which Oklahoma location shoots can double for nearly any environment, locale or ecosystem.

“It’s funny when you watch the film,” he said. “You don’t realize there’s, like, six different climates here. There’s swamps, there’s desert, there’s mountains, there’s prairies, there’s cities, there’s small towns. There’s so many avenues to shoot here, so for me, it was cool to be a part of something that could showcase the backdrop of Oklahoma, you know, and showcase the kind of talent and what people can do. I mean, if you did this in L.A., you would need five million dollars, 10 million dollars. For what they did with the budget, it was unbelievable. It’s like a calling card, like ‘This is what you can get in Oklahoma.’”

Working in Oklahoma also means being close to home and family. Since his 2014 marriage to Kristen McMullen, Merriman has split his time between Oklahoma and Los Angeles. It was a conscious decision to stay grounded in his home state while maintaining a foothold in the industry.

“I try to split it 50-50,” he said. “So, I’m usually in L.A. during January, February and March, then I’m back home April, May and June, and then July, August and September are a toss-up. But I’m a workaholic, so I’ll go wherever you want.”

Merriman completed work on the film Sunny Daze with Third Watch/Sons of Anarchy actor Michael Beach and Lonnie Chavis of This Is Us about a month ago, so he is now in the Oklahoma phase of his year. He prefers his time in Oklahoma over his California existence, mainly because the people he loves are here.

“I have a house here with my wife, and my whole family is here — my mom, my dad, my grandma, all my cousins,” Merriman said. “I try to go to L.A. only for work now. It’s not my place. It’s not my ‘happy place.’ [Oklahoma] is what makes me happy, you know? I mean, all my best friends are here and my family, and that’s really what it’s all about. My job is a little different than everybody else’s, but I still love coming home.”

That is where The Jurassic Games comes back into full focus. Merriman hopes that, through is work on Bellgardt’s film and hopefully through future Oklahoma-based projects, he can act as a kind of film ambassador for the state, helping foster more film business on his home turf.

“There’s kind of a couple of doors here in Oklahoma that I’d walk through,” he said. “I would love to direct if somebody brought something to me, and of course, I love being in front of the camera. I mean, I grew up on sets, so there’s so much knowledge I could bring to the table if need be. And I’d just like to see what happened in Atlanta and Baton Rouge, where we have these huge tax incentives. … There’s so many ways to pump the business that I love into the place where I love to live.”

He also considers deadCenter Film Festival as an important factor in the formula that could bring more film work to Oklahoma, not just for himself but for other people trying to build a thriving industry to the state.