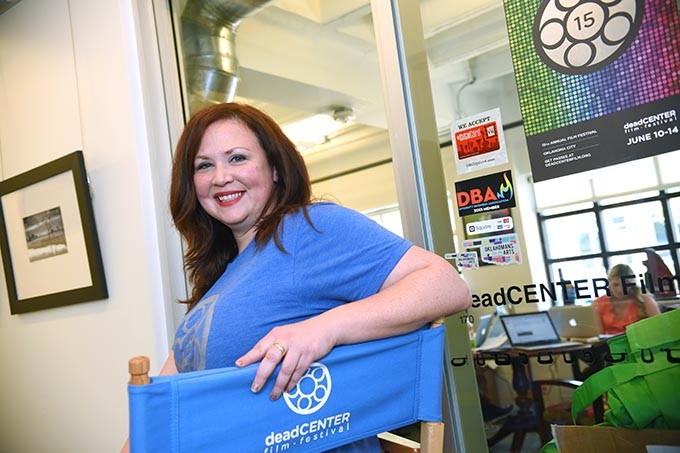 deadCENTER Film Festival is getting a rebrand of sorts, but the changes will not negatively impact the annual festival. Shortly after the close of this year’s festival, the organization announced that it will rebrand as deadCENTER Film Institute. Kim Haywood, director of programming and education, said the move is about creating an umbrella organization that better reflects the mission of deadCENTER.

“There are two components to deadCENTER,” Haywood said. “One is educational, and one is the festival itself. We will divide the responsibilities now between two separate directors. One will oversee artistic development, and the other will act as a director of the business side of the institute.”

Lance McDaniel, the current executive director, will be handling the artistic development side of the institute, a role he has managed since the festival began.

From August to December, Haywood and McDaniel have made their way around the state, teaching film classes and doing presentations for students in every region of Oklahoma. The institute is the logical extension of their commitment to educating Oklahomans about film and the film industry.

“We have been working with high school students every year for the last seven years, and now we are seeing many of those kids in college; many of them are in film classes or programs,” Haywood said.

McDaniel will oversee the development of formalized educational programs for the institute. Some of the country’s larger film festivals offer intensives, much like master classes, in which 10-12 students work with experts in the field. Sundance Film Festival in Park City, Utah, has one of the most respected sets of master classes, and a few notable Oklahoma filmmakers and artists have taken those classes.

Holdenville native Sterlin Harjo received a fellowship from Sundance Institute in 2004. He used the opportunity to take Sundance’s directing classes. Harjo’s newest film, Mekko, was featured at deadCENTER in June after premiering at Los Angeles Film Festival in the same month.

Chad Burris was part of the producing intensive at Sundance Institute, and he has used his experiences to help develop film in Oklahoma. He won the Mark Silverman Award for New Producers at Sundance Film Festival in 2007.

Haywood mentioned Harjo and Burris when she talked about deadCENTER Film Institute.

“We are thinking about a program similar to Sundance,” she said. “Screenwriting, directing and producing will be a big part of what we offer, and we do want to keep the classes small so that participants can get the most out of their time.”

The goal of the institute is to provide a well-rounded education for people in the film business. Haywood said that means the institute will also offer more tech-based courses, including design and production elements. They will differ from those at Sundance in at least one very important way.

“We are going to try to include space for adult novices in the courses,” she said.

At larger festivals like Sundance, the educational programs are closed to novices, but deadCENTER has the opportunity to nurture what is still a very young film industry in Oklahoma. The festival has played an important role in developing a professional film culture here. What began as a small screening in 2001 has turned into an international festival that attracted 30,000 fans, filmmakers, actors and other professionals this year. Those connections are what the institute is banking on as it begins program development and selects instructors.

Haywood said deadCENTER has had a tremendous impact on the growth of film in Oklahoma but support from the community and the work of colleges and universities has also contributed. The institute will hopefully further the groundwork already laid by these institutions.

“We’ve had success in changing the culture already,” Haywood said. “We want the institute to help make Oklahoma a more comfortable atmosphere for people to make a film. We hope it will inspire people to make more films.”

The rebrand and new structure will help McDaniel focus on developing educational programs toward that end, while a new executive director will take over the day-to-day business operations of the institute. A huge part of the business side is fundraising, which can border on a full-time task depending on the size of the organization. deadCENTER is large enough now that fundraising can potentially interfere with program development if both tasks fall to one person.

On July 1, the institute began accepting applications for the new executive director position. The director will manage finances and fundraising, expand partnerships and build an endowment. Haywood said interviews will begin in August and a new director will be announced in early fall.