With fresh ingredients and loyal customers, Grill on the Hill watches as Capitol Hill grows.

Nestled at the top of Commerce Street, Grill on the Hill celebrated its 10th anniversary earlier this year and has watched as the historic neighborhood has begun to revitalize around it.

Husband and wife Rory Carver and Norma Ooley-Ericson took over the restaurant space in 2008 when Rory was looking to become his own boss after years working in corporate environments at Olive Garden and The Cheesecake Factory.

When the couple moved into the restaurant, a year-round Christmas store sat intermittently vacant where a branch of Oklahoma City Community College now resides. Slowly but surely over the last decade, Capitol Hill has began to take the steps back to regaining its thriving main street of decades past.

“There used to be a bank down the street, and we have an architect’s office in there now,” Ooley-Ericson said. “They’re buying up all the property and they are revitalizing everything. It’s crazy. There wasn’t much down here besides us, Coney Island and a few Mexican restaurants.”

Developers John Austin and Steve Mason are among those developers looking to bring vitality back to Capitol Hill, which was a thriving until the late 1970s and greatly affected during the 1980s oil bust, according to Capitol Hill Main Street.

“It’s exciting to see new businesses coming [to Capitol Hill],” Ooley-Ericson said. “I’ve had people ask if I’m concerned if other restaurants come down. ‘No; I was here first. I’ve already built my business. They have to worry about me.’”

Grill on the Hill has built a loyal customer base. Ooley-Ericson estimates that 75 percent of its customers are regulars. It was evident one afternoon as customers greeted her upon entrance and headed to the counter while yelling “half-pound down” in kitchen lingo for a half-pound hamburger.

Burgers come in one-third and half-pound sizes and reflect the biggest change to the restaurant since the Carver and Ooley-Ericson took over: a commitment to fresh food. They kept a popular Memphis burger ($6.49 single, $8.49 double) on the menu with a few tweaks. It is an open-faced hamburger topped with fries and smothered in a choice of brown, white or spicy Cajun gravy and cheese.

I was born in Memphis, and I can attest that I’ve never heard of such a concoction hailing from the Bluff City, but that doesn’t mean it’s not a delicious mess of a meal.

The restaurant has added a chorizo Memphis burger ($6.99 single, $8.49 double) in recent months that is made with a chorizo patty and topped with spicy gravy, and an Indian taco burger (third-pound $7.49, half-pound $8.99) that tops a burger patty with chili, beans, lettuce, salsa, cheese, tomato, sour cream and onions and has quickly become a top-seller.

On Fridays, the choice of a jalapeño, mushroom or bacon cheeseburger is paired with fresh cut french fries and a drink for only $9.50.

The fried catfish platter (also available in a spicy version) and slow-cooked barbecue pork-stuffed baked potato ($7.29) are among Grill on the Hill’s other best-selling menu items.

The hand-breaded okra was a highlight of the meal. tweet this

In honor of the restaurant’s 10th anniversary, it began rolling out a new collection of menu items based around its in-house made chorizo, which has been a staple of its breakfast menu but now appears on a few new items like the aforementioned Memphis burger, chorizo tacos ($8.99) and taco salad ($8.59).

“The chorizo we were using was being bought prepackaged, and I read the package and I was like, ‘Oh we can’t serve this to our customer. Ew,’” Ooley-Ericson said.

Carver got to work on his chorizo spice blend to go with freshly ground pork shoulder. The end result is a smoky, spicy and a little sweet (thanks to a dash of cinnamon) chorizo that holds up much better than the prepackaged variety that often disintegrates when put on heat.

The only other fresh chorizo of which I am aware in the metro area can be found at Café Do Brasil, and I think Grill on the Hill’s version is more substantial with sweet and spicy notes, while Café Do Brasil leans into paprika and allspice. Both are good, and I’d love to make it a quest to highlight every establishment in the city that is making its own chorizo.

I preferred the soft taco as a vehicle for the chorizo to shine in comparison to the taco salad. The bits of chorizo were hard to find among the layers of chips, lettuce and other accoutrements. The hand-breaded okra was a highlight of the meal and served as an excellent replacement for Grill on the Hill’s fresh french fries.

Grill on the Hill serves breakfast and lunch 6:30 a.m.-3 p.m. Monday-Thursday and stays open until 8 p.m. on Fridays and is closed on the weekends. 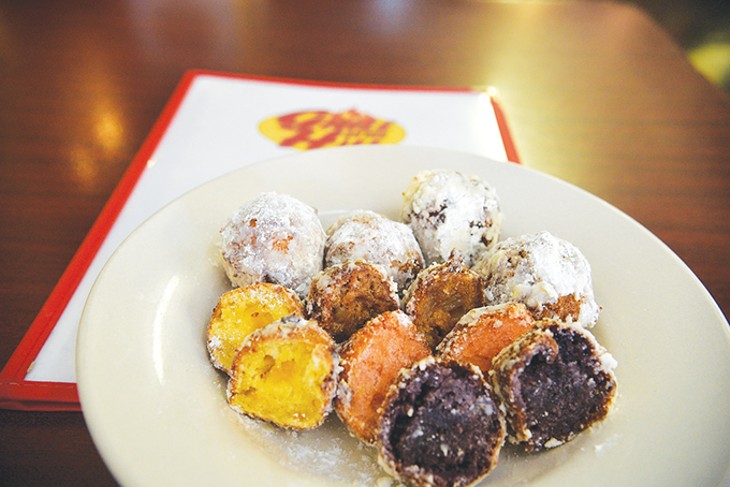 If you have a sweet tooth, I highly recommend Grill on the Hill’s interesting and fun fruit-filled fritters. They also serve fresh apple pie and cobbler, but the fritters have been lodged in my memory since featuring them in Gazedibles a few months ago.

The fritters (2 for $1) are similar to doughnut holes in size, but much more substantial. The restaurant started with somewhat traditional apple-cinnamon and has expanded with interesting flavors like strawberry-pineapple, peach and my personal favorite blueberry-lime.

The dash of citrus highlights the blueberry for a treat that can be a sweet breakfast or finish to a meal.

Grill on the Hill has been busy every time I’ve entered the establishment, even at non-peak meal hours. It’s a testament to its commitment to serve fresh food at a reasonable price. (Everything on the menu is under $10.) If it has been awhile since you’ve eaten at Grill on the Hill, I recommend checking it out to see what else is happening in Capitol Hill.

Grill on the Hill

What works: Fresh and house-made ingredients like chorizo and hand-breaded okra shine.

What needs work: The taco salad is somewhat clunky to eat.

Tip: Order fruit fritters to go with breakfast or lunch.