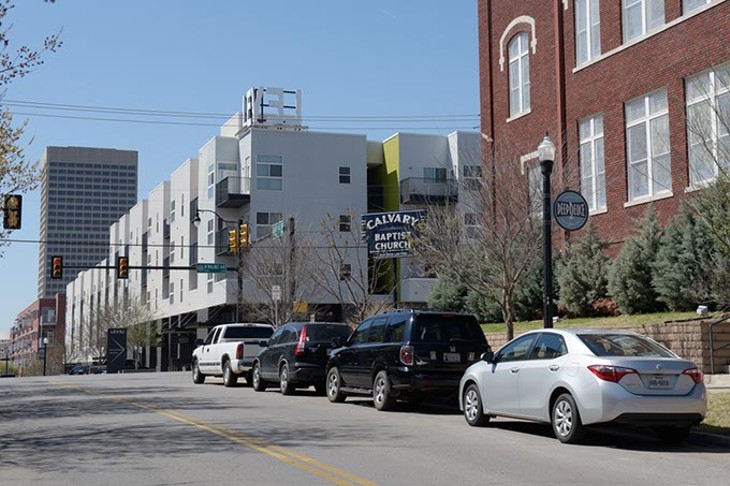 Deep Deuce has deep roots. Over the course of the past century, the historic district has changed drastically from a pocket of black culture to a popular residential district adjacent to Bricktown.

“Deep Deuce is one of our most historic districts downtown,” said Mallory O’Neill, Bricktown director at Downtown OKC, Inc. (DOCI), a nonprofit that manages the eight business improvement districts in the area.

Originally segregated as an African-American community, Deep Deuce produced vital and long-lasting black culture. Jazz music came to a crescendo in the 1920s and ’30s, when prominent musicians such as Jimmy Rushing and Charlie Christian called the district home.

Deep Deuce’s cultural history remains tightly linked with its historical legacy. Two of the most significant African-American men of the 20th century, Martin Luther King Jr. and Ralph Ellison, both passed through the district; the former spoke once at Calvary Baptist Church, and the latter lived in the area.

Beginning in the 1960s with the introduction of Interstate 235, Deep Deuce lost many of the people and events that had shaped its earlier days, caught in the ebb and flow of migration and desertion. Now, after a resurgence of interest, the district is at a crossroads, looking back from a much different future.

“There’s a lot to be told related to the music, the African-American community,” O’Neill said. “That’s really an important part of the story we like to tell today.”

Along with O’Neill, one other member of DOCI’s 11-person staff works specifically with Deep Deuce stakeholders, business owners and retailers to further improve the district.

Native Roots Market has previously hired buskers to play outside and will continue to do so throughout the summer.

Oklahoma-based musician Walter Taylor III, one of the voices that shaped Legends Night events, has seen Deep Deuce transform over the years. First performing in the district when he was 13 years old, Taylor later played music festivals there in the 1980s. He has performed with artists such as Miss Blues, Brother Num and Joe Nelson.

Returning to Deep Deuce in April 2010, Taylor played at Sage Lounge, where Slaughter’s Hall is now located, as part of TaylorMadeJazz.

“There hadn’t been any jazz in Deep Deuce for a long time,” Taylor said. “We started bringing in some of the hottest young performers.”

With local interest in jazz renewed, Taylor worked with DOCI to bring Legends Night to life. He said the history and the music of Deep Deuce are equally important.

“There was a lifestyle,” he said. “We want to make sure we uncover as much of it as possible.”

Taylor, who has also played blues and jazz at [Artspace] at Untitled, said he hopes the music scene in the district will continue to grow more diverse.

“It is starting to pick up,” he said. “I’d like to hear a little more music. We can make it happen.”

Deep Deuce’s emphasis on live music reflects the district’s larger focus: living. Although demolitions and the addition of Interstate 235 changed the district, O’Neill said it continues to be a place for community.

“It’s really our primary residential district downtown,” O’Neill said. “It’s where we have the most condensed residential units compared to any other district.”

With housing developments The Hill at Bricktown and The Maywood apartments and convenient access to locally owned restaurants, Deep Deuce is a growing community. Property owner Richard McKown and DOCI recently commissioned the Institute for Quality Communities at the University of Oklahoma (IQC) to conduct a districtwide retail audit. IQC will provide a report that details ways to better improve retail engagement with the community.

“There are different ways that different stakeholders in the district are always trying to improve and better the neighborhood,” O’Neill said.

Over the next few years, O’Neill said she thinks the area will continue to see residential and commercial growth. As for future goals, DOCI will continue to work on Deep Deuce’s connectivity with other districts.

“We want to capture that connection between Bricktown and Deep Deuce, and I think that’s something that really is going to be a high priority for us as an organization,” O’Neill said.

As the area continues to grow, recalling certain aspects of its past even as it travels in a different direction, the district’s identity remains unmarked in one fundamental way. Unlike Bricktown, which features a large sign on its main thoroughfare, Deep Deuce lacks a public signifier of its identity.

Over the past year, DOCI, along with district property owners, fundraised for a sign. Crowd-sourced fundraising and DOCI fund-matching has helped make possible a district marker on the underpass on Second Street.

While Deep Deuce currently lacks exterior historical markers and the existence of historical identifiers is specific to each building — such as Deep Deuce Grill’s interior tribute to musical history — O’Neill said the district is always looking for more identifiers.

The sign on Second Street, which will likely come later this summer or early fall, will provide the district with a way to mark the storied, still-shifting area that is Deep Deuce.