Deerpeople overcame a herd of obstacles before recording their debut 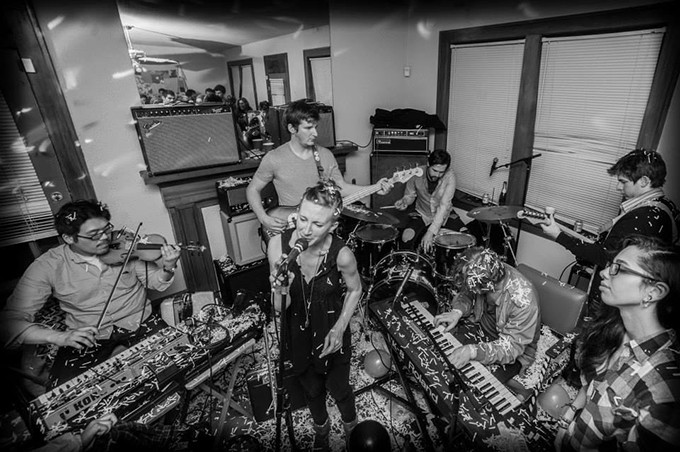 Existing long enough to have “old songs” is something drummer Jordan Bayhylle realizes is an achievement in itself. Bayhylle and frontman Brennan Barnes started playing together in 2008 and slowly brought everyone else in to form the band.

“I think we have a pretty unique sound,” Bayhylle said. “I think it’s just attributed to general weirdness, and none of us really listen to the same kind of music, so we all play off of each other.”

Deerpeople’s music is a psychedelic fusillade of sound, with Barnes’ impassioned shouts and keys over Bayhylle’s crashing drums, Alex Larrea’s melodic Stratocaster and Derek Moore’s thumping 4-string bass. Julian Shen fills out the madcap soundscape with a keyboard, a violin and an accordion, and Kendall Looney’s trill flute and show-stealing French vocals on certain songs further freshen the lively proceedings.

Fans can look for Deerpeople’s first full album, There’s Still Time for Us to Die, around the beginning of next year. According to Barnes, it will be both vastly different and a natural progression down the Deerpeople path.

“It’s really, really exciting. We’ve been sitting on it for a year and a half,” Bayhylle said. “We just keep having little bouts of bad luck with money, equipment being destroyed, vans being left in Utah.”

Barnes said the van incident was a stressful, surreal blur. It happened last year while driving back and forth through the Rockies to play shows in Utah and Colorado. The gauges had never worked, so when it started acting up on a stretch of desolate road, they assumed it was overheating. It turned out they were out of oil.

“As soon as we turned the engine off, all the pistons fused together,” Bayhylle said. “We had to take a taxi from the middle of nowhere to make it to a show in Salt Lake City.”

Despite the catastrophe, Bayhylle said they had a good time and met some cool people, some of whom they still keep in touch with and stay with when they’re on tour. One fan they met at the Salt Lake City show designed the art for their new album.

Sofar Sounds, an online music club based in London, shot a Deerpeople set at The Other Room in September. The club organizes semisecret house shows globally. They aren’t exactly secret, but you have to be in the club to know where they are.

Despite these successes, touring without a van has been a trial. But that resolve has lent Deerpeople their staying power. They played their five-year anniversary show last year.

Deerpeople have overcome numerous obstacles on the way to their highly anticipated debut album.