It’s named after decora, a Tokyo street fashion of bright, bold colors that evoke a sense of fun, and that aesthetic carries through the restaurant.

The three most important things in real estate are location, location and location. That’s what I think of whenever someone mentions Dekora!, 200 S. Oklahoma Ave., Suite 130. Well, I get to location eventually.

First, I usually think about the food or how far the restaurant has come since its original iteration as In the Raw.

But then I come back around to Dekora!’s location in Bricktown, once the city’s premier dining and entertainment destination.

If you haven’t been there, and I worry you haven’t, Dekora! is on the south side of one of the district’s southernmost buildings, hidden around the corner on the way to Harkins Theatres Bricktown 16. People who aren’t looking for it might not see it.

It’s named after decora, a Tokyo street fashion of bright, bold colors that evoke a sense of fun, and that aesthetic carries through the restaurant.

The tables and walls are decorated with Japanese pop culture pictures and action figures. The outside windows include paintings of sushi heroes fighting an octopus-armed villain. It’s a feast for the eyes, which is kind of a visual appetizer before the feast for the stomach begins. Make no mistake; the look of the restaurant is a lot of fun, but food is the reason to visit Dekora!

Here’s my plan for a foolproof visit:

Step 1: Pork belly Brie sliders ($8 for 2). Sometimes I worry our local restaurants have cracked the code for telepathy. How else are they always guessing exactly what we want to eat?

When the server at Dekora! told me they were now serving sliders filled with pork belly and Brie, I subtly slid a tinfoil hat onto my head. But after a bite, I took off my mind-reading ray blocker, because if this is how they’re going to use my brain waves, have at them. The pork is supple and full of juicy flavor. The buttery Brie is melted on top, giving it a creamy texture and a boost of rich fat. Does it need the bread? Maybe not, but it sure makes them easier to scarf.

Step 2: Get a drink. Owner Anna Mains also runs bars Timeout. and Rockford Cocktail Den and is a member of the Oklahoma City chapter of the United States Bartenders’ Guild, so you best believe she knows good libations.

Dekora!’s menu is filled to its fizzy brim with signature cocktails, premium sakes and Japanese beers.

Step 3: There are two kinds of sushi out there, and they’re both good. There’s Japanese sushi, which is usually just fish and rice, and there’s American sushi, which is rolled up with all kinds of goodies and covered in a variety of sauces.

It’s a fair bet that Science Patroll ($15) is American sushi based on the inclusion of jalapeño and spicy mayo. And if that’s enough for people to turn their noses up at it, that’s a shame.

Filled with spicy yellowtail and tuna and topped with more yellowtail, dynamite tataki sauce and scallions, it’s a lovely fresh roll with a nice little kick. Jalapeño might not be a traditional Japanese ingredient, but it sure brings a lot to sushi. The heat, green flavors and crunch are assets to the gentle taste of fresh fish. 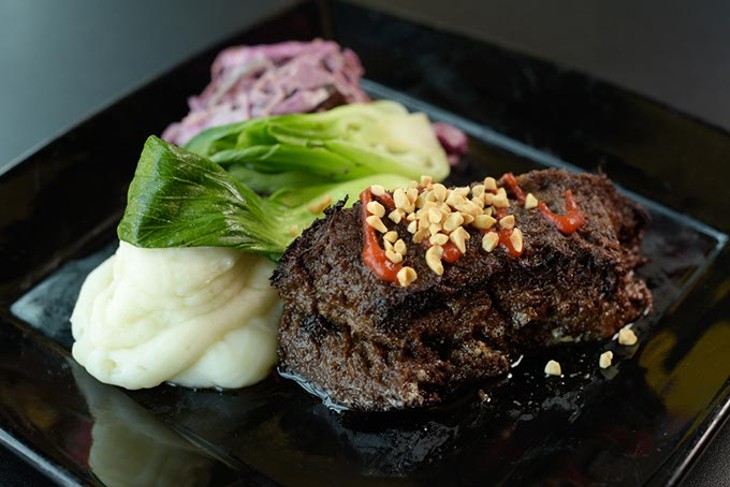 While we’re dining on sushi that has very little to do with Japan, let me tell you about the joy of Sushi Doughnuts ($9). A sushi roll is stuffed into a doughnut-shaped mold and then dipped in tempura batter and flash-fried to give it crunch and a cohesive texture. Chefs then decorate it with toppings and sauces. It’s a handheld dish that is whimsical and delicious. It’s kind of a perfect fit for Dekora!

Step 4: If the gluten in rice is a no-no on your diet, do not despair. One of Dekora!’s best dishes is the tender and tasty yellowtail special ($14). Yellowtail is another name for Japanese amberjack, an extremely luscious fish that very nearly melts on the tongue. The special is sliced yellowtail in a spicy ponzu sauce served with jalapeño and cilantro. The salty sauce hits immediately, followed closely by the gentle, buttery fish and the crunch and heat of the jalapeño. It’s not on the menu, so ask and ye shall receive.

Step 5: Some people don’t eat fish, and those people are wrong. But if you’re related to them or you’re more tolerant than me, you can still go to Dekora! I think fried rice ($8) is a delight, and it’s even more irresistible when you add in pork belly ($3).

This version is stir-fried with cabbage, carrots, garlic and shallots, which gives the dish a ton of crunch to complement the fatty pork belly.

For another non-seafood option, I think the new menu item of braised beef cheek with Sriracha caramel sauce ($15) is a winner.

Beef cheek (often called barbacoa) is a favorite in tacos, prized for its intense beef flavor and succulent texture when it’s slow-cooked. Here, it comes with wasabi whipped potatoes and sautéed bok choy — a nice counterbalance to the sweet, spicy flavor of the caramelized beef.

Mains and staff have dialed in the flavors of the food and drinks and created a fun, welcoming atmosphere. Get down to Bricktown and see for yourself. 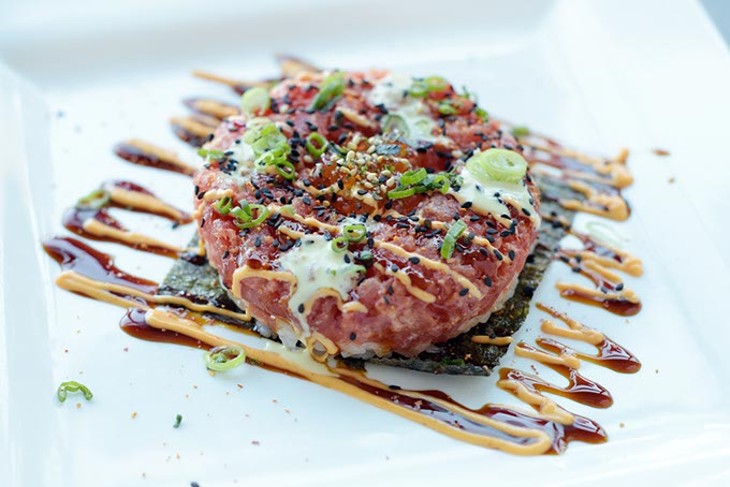