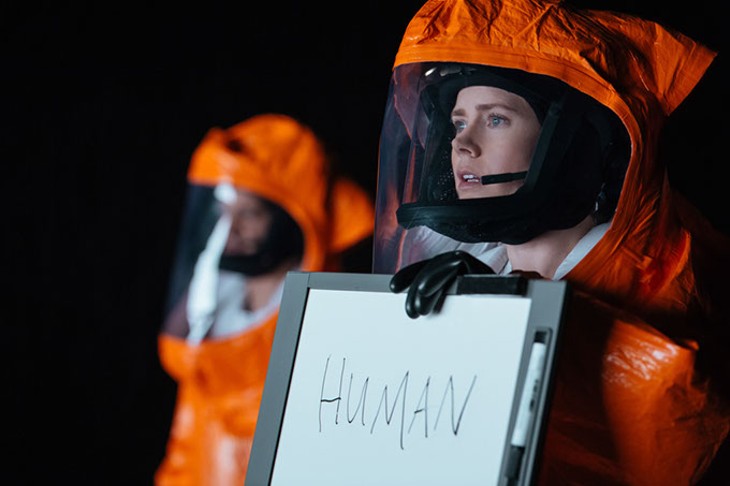 At this fractious and uncertain time in our history, we find ourselves shutting down relations or striking out at the unknown or unfamiliar. Real communication is being replaced by red-faced rhetoric that does not want an answer and only intends to pummel rather than interact.

Into this horror comes Denis Villeneuve’s Arrival, a science fiction drama in which the effort to engage in thoughtful, careful communication could make the difference between the continuation of human existence and the real possibility that we could all get blown to bits. In that sense, Arrival is only science fiction because of the presence of hemispheric spacecraft helmed by spectral, five-legged creatures. Everything else is entirely based in reality.

Amy Adams plays Dr. Louise Banks, a lonely professor of comparative linguistics who lives daily within an inescapable shroud of grief and loss. Apart from her increasingly remote interaction with her electronically tethered students, Louise is an expert in communications who rarely communicates.

And then it happens. In quick succession, semi-spherical monoliths descend on Earth and hover a few yards over the surface in 12 disparate locations, including one in rural Montana. As humanity begins its hair-on-fire freakout, a military team led by Colonel Weber (Forest Whitaker) arrives at Louise’s home to ask for help in bridging the communications chasm. She provided military support once with Farsi interpretation, but in this case, Louise must build a knowledge base with only her understanding of how language is formed and deployed.

Soon, Louise gets teamed with military scientist Ian Donnelly (Jeremy Renner) at the contact site, where they will build a relationship with the visitors, all with the goals of first understanding their language and then ascertaining why they came here. And of course, all of this plays out against a world that can barely bring itself to deal with its own internal communications, let alone messages from beings without human forms, let alone proper documentation.

What transpires is an often mesmeric experience that goes beyond the tropes of extraterrestrial contact films and into something more essential: the act of achieving understanding. Villeneuve (Prisoners, Sicario) expends just enough on the visuals so that the audience will suspend its belief and go along with his thesis. He then gives Adams most of the heavy lifting.

Adams gives Louise the determination of a usually confident expert diving headlong into the unknown, willing to cast off preconceptions in the interest of getting it all right. Her main obstacles are her visions of the daughter she lost to cancer. These memories of interactions with her daughter can be emotionally immobilizing, but might be brought to bear in forging a future with the beings she calls “Heptapods.”

Arrival bears the unmistakable signs of prolonged exposure to the oeuvre of Terrence Malick: while the arresting images of spacecraft and visiting aliens will leave an impact with viewers, they are set against mist-covered Montana foothills so beautifully captured by Director of Photography Bradford Young (Selma) and scored by Villeneuve’s go-to composer Johann Johansson, so the pastoral carries as much majesty as the extraterrestrial. It is also a deeply meditative story with implications beyond the present for its characters. In Arrival, time is entirely relative.

Naturally, the majority of humans in Arrival cannot be trusted with the enormous responsibility presented by Villeneuve: Louise naturally must race for solutions, since forces beyond her are too trigger happy to wait for answers. Patience, plus a renewed trust in science and intellect, could go a long way toward solving problems great and small. If there are Heptapods out there planning a visit to Earth, perhaps they should give us a few years before Arrival.