Denton rock outfit Pageantry carves out its own celebratory niche 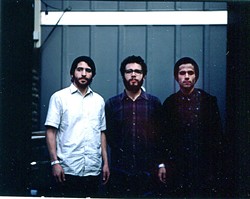 Roy Robertson, frontman and songwriter behind Denton indie-rock outfit Pageantry, realizes there are two levels that most things can be read at: surface and core. That duality is fascinating to him. He holds brains and beauty in equal esteem and realizes that an inviting veneer is often essential to conveying a deeper meaning.

It also translates to the music he is making with bassist Pablo Burrull and drummer Ramon Muzquiz — one side favoring the breezy melodies of pop music and the lush sounds of 1960s crooners backed by sappy string sections, the other electric tension and off-kilter time signatures of distorted, atonal music.

Somewhere in that cross section tangentially related to bands like Unknown Mortal Orchestra, Beach House and Radiohead, Pageantry has found a sound of its very own.

“I want a certain celebratory atmosphere for the band but also this cynicism and self-aware idea of what we are doing,” Robertson said of the band and how the name is also something of a mission statement. “It’s like the Vaseline on the teeth forcing a smile. We wanted to be realistic and honest but also a little pompous and indulgent in the bullshit.”

It’s something Robertson has wanted for a long time: the ability to adequately express the ideas in his head. Amongst a slew of other projects, he has recorded and performed solo — a reality that clipped what the music could be, impeding the musical depth and layering he desperately desired.

The resulting shift can be heard in the Friends of the Year EP Pageantry released in 2013, just a short year after officially forming. If the four-song effort suffered from anything, though, it was how new the situation was to all parties involved.

“It was a blurry vision of what the personality of the band was,” Robertson said. “When we recorded the EP, we were barely a band at all. We hadn’t toured. We hadn’t even played that many shows together.”

After two years of frequent touring — including appearances at CMJ and South by Southwest and shows in support of Midlake and Superchunk — Pageantry is finding its true self. That’s heard in the more focused single “Spine” — out now — and even more so on the full-length debut due sometime in 2015, tailoring down and pushing forward in the same pass.

Pageantry with Deerpeople and Bored Wax