Mexican Radio takes on the atmosphere of 16th Street Plaza District with a fun and lively take on tacos. 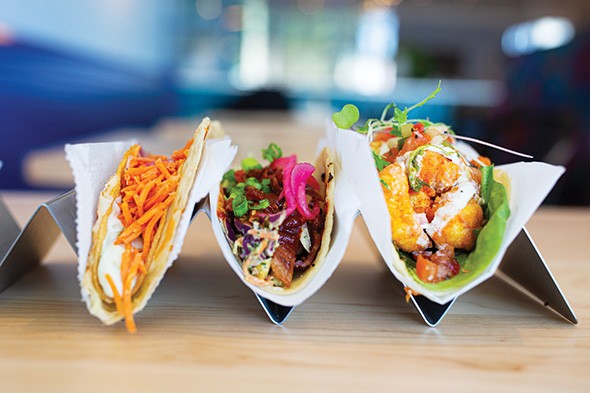 The rainbow canopy over the patio at Mexican Radio — the newest restaurant from A Good Egg Dining Group — serves both practical and aesthetic purposes. It provides shield from the rain and allows the outdoors to be warm during the cold, but the bright colors also connect the restaurant to its home in 16th Street Plaza District.

Located at 1734 16th St., in the space formerly occupied by the original location of Empire Slice House before it moved a block west, A Good Egg founders Keith and Heather Paul wanted their first original concept in three years to be connected to its neighborhood.

“A concept usually starts with a menu or location, and this started with the location and we built around the neighborhood,” Keith Paul said. “All of the colors [in the restaurant] and in the canopy especially are a nod to happiness and being joyful. The Plaza District is a district for all, and it’s kind of a beacon. So many people have already said, ‘Now we know where Mexican Radio exactly is,’ because of the colored canopy.”

The name Mexican Radio is inspired by the 1983 Wall of Voodoo new wave song, and the restaurant’s servers wear blue jeans and their favorite concert T-shirts as a uniform. The barbecued iguana mentioned in the song about geography is not on the menu.

“Music is a big part of the restaurant; it’s named after a song that takes us back to the early MTV days with Mexican Radio. It was fun coming up with the name,” Paul said. “Mexican Radio was fun right when [Heather and I] first started talking about it in the car one day, and we decided to stick with it two days later. We tried really hard to see if we could get away from it when we worked with the branding company. If we come to them with a name, we want to see if they can change our minds, and no one could do it.”

Paul said it is important for a restaurant to come up with a tagline to let people know what they’re serving, and the new concept is simple and straightforward. Mexican Radio: Tacos and cold drinks.

The restaurant serves what it refers to as “nondenominational” tacos. There are classics like carne asada, carnitas and pollo verde, but the menu also includes fusion, breakfast and vegetarian varieties. 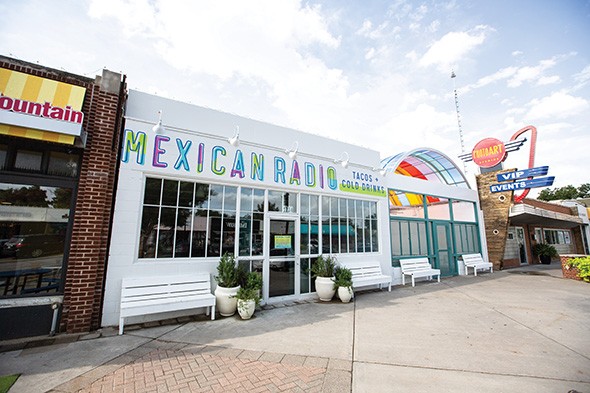 The couple tried a crispy rice dish while on vacation in California. Gehlert’s interpretation is on the menu as crispy green rice. Arborio rice is parboiled and deep-fried and then sautéed with cabbage, radishes and peas. It’s then tossed with “green juice” made from a blend of green onions, cilantro, jalapeños and spinach, then finished with crema and pea shoots.

“Heather described the rice as crispy all around,” Gehlert said. “So trying to create something inside someone else’s head and the experience they had is interesting, but we did it. …The rice is almost like a Rice Krispie; it has crunch, depth of flavor and a little bit of spice.”

Another suggestion that Gehlert brought to life is the pork belly char siu taco, which takes a Chinese preparation and wraps it in a flour tortilla.

“I decided to do something different with a fresh slaw made out of bok choy, which you don’t see very often,” Gehlert said. “The dressing is fresh lemon and ginger; it’s so amazing that I could drink it.”

The Brussels sprouts side dish also takes on Asian inspiration as they are finished with red miso paste and hoisin-glazed cashews.

For a fried chicken taco, Gehlert drew inspiration from an Oklahoma institution: Eischen’s Bar in Okarche.

“When you go to Eischen’s, you get a boat of fried chicken with raw onions and pickles,” Gehlert said. “[The taco] is a delicious chicken strip with dill pickles, raw onion and a drizzle of honey.”

For seafood, Mexican Radio offers ahi tuna tartare served in a lettuce wrap with guacamole and Sriracha vinaigrette. It also has a barbecue bacon and shrimp taco, and a crispy cod taco marinated for 24 hours with lime juice, Mexican oregano and jalapeños and a tempura-style batter that utilizes Topo Chico.

“When you bite into it, there is a brightness of lime, and being in the 24-hour marinade, it is crunchy with freshness,” Gehlert said of the cod taco. 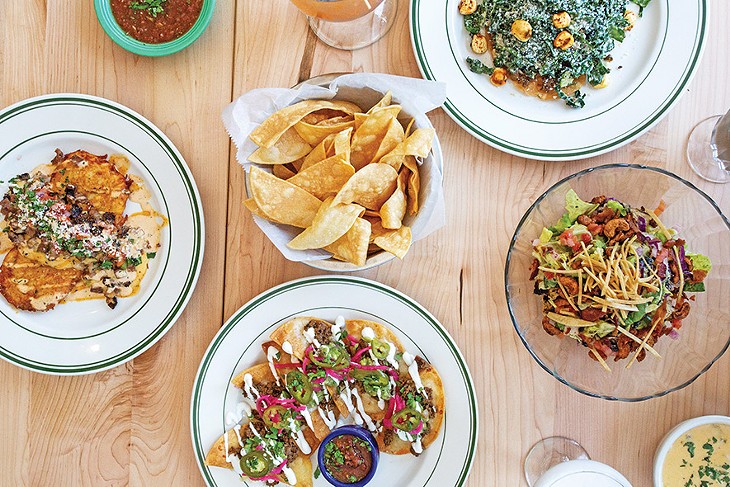 Keith Paul said his favorite taco on the menu is the breakfast taco with in-house smoked brisket, fried egg, refried beans, potatoes, Chihuahua cheese and salsa rojo in a flour tortilla. The brisket also makes an appearance with avocado, green onion chimichurri, cabbage and cotjia cheese in a corn tortilla.

Mexican Radio also offers a bacon breakfast taco and a veggie breakfast taco with plant-based chorizo made from jackfruit and tempeh blended together. For vegetarian offerings, the chorizo stars with spinach, cotija, avocado crema and potato with a crispy Buffalo cauliflower taco and a potato crunch wrap, which is an ode to Taco Bell’s popular item.

The crunch wrap is a double-decker taco. A flour tortilla is fused with a crispy corn shell with Chihuahua cheese and filled with jalapeño mashed potatoes and topped with carrot (pico de gallo).

“We’re trying to adhere to people that don’t eat any meat products at all,” Gehlert said. “The menu can be modified to fit the needs of multiple palates. The Brussels sprouts are vegan without the bacon. So are the beans if ordered without cheese. You can sub the chorizo on any of the tacos on the menu.”

Mexican Radio fulfills the “cold beverages” part of its tagline by offering four varieties of alcoholic slushies: the Peni-chillin with Highland Scotch, local honey, lemon and ginger five spice; the Dole Whip Margarita with blanco tequila, pineapple, banae du bresil, coconut cream, agave, lime and fruit pebble-salt rim; the Grapefruit Mule with vodka, grapefruit syrup, ginger juice, lime, cinnamon and a rainbow Airhead; and the spiked chai tea with rum, vanilla-chai syrup and almond milk. It also has eight house cocktails. Both Mexican and local craft beers on tap are served in 18-ounce schooners that are kept in the freezer.

“We definitely have the coldest beer — maybe not in the state, but definitely in the Plaza District for sure,” Keith Paul said.

Mexican Radio is the first full new concept for A Good Egg since opening a Tucker’s Onion Burgers location in Norman, Republic Gastropub in Chisholm Creek and Barrios in 2016. The group also took over and revamped the Museum Cafe at Oklahoma City Museum of Art earlier this year.

“We learned to take our time and didn’t push it to get open fast because we didn’t need it to create income and took our time hiring and brought in some of our best people from other restaurants,” Keith Paul said.